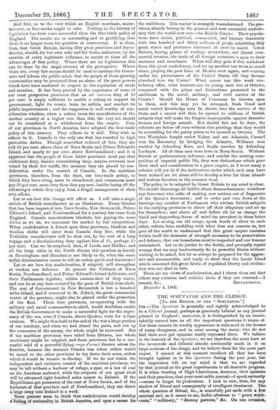 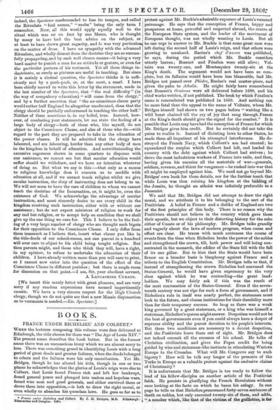 [To THE EDITOR OF THE "SPECTATOR.") SIR,—The Spectator is generally and rightly acknowledged to be a Liberal journal, perhaps as genuinely Liberal as any journal printed in England ; moreover, it is distinguished by an unmis- takably earnest tone on all the important questions it treats of. Forthese reasons its weekly appearance is welcomed in the houses of many clergymen, and in mine among the many, who do not find their own pet opinions neatly expressed there. We believe- in the honesty of the Spectator, we are therefore the more hurt at the inveterate and illiberal attacks continually made in it on. large sections of the clergy, and we believe them for the moat part unjust. I cannot at this moment recollect all that has been brought against us in the Spectator during the past year, but the impression left on my mind is that we are regarded by that journal as the great impedimenta to all desirable progress.. It is when treating of High Churchmen, however, their opinions and their practices, that your most noble journal—I speak earnestly —seems to forget its professions. I look in vain, then, for any shadow of liberal and consequently of intelligent treatment. The whole question of Ritual, &c., is scornfully put aside with a few satirical and, as it seems to me, feeble allusions to "green waist- coats," "millinery," "dreamy parsons," &c. On one occasion, indeed, the Spectator condescended to lose its temper, and called the Ritualists ",foul names," " snobs " being the only term I remember. Now, all this would apply equally well to the ritual which was set on foot by one Moses, who is thought by many to have had the best advice on the subject, or at least to have shown great sagacity, and he was very patio

on the matter of dress. I have no sympathy with the advanced Ritualists, and wholly dissent from the doctrine they are so success- fully propagating, and by such well chosen means—it being a very hard matter to punish a man for an attitude or gesture, or even for the particular pattern of his vestment. Yet all these things in- doctrinate, as surely as pictures are useful in teaching. But since it is mainly a clerical question, the Spectator thinks it is suffi- ciently met by a pooh-pooh, or, at the most, a snarl. I have been chiefly moved to write this letter by the statement, made in the last number of the Spectator, that "the real difficulty"

the way of compulsory education) " will come from the clergy," and by a further assertion that "the no-conscience-clause party would rather half England be altogether uneducated, than that the clergy should he partially embarrassed in teaching the other half." Neither of these assertions is, in my belief, true. Instead, how- ever, of combating your statements, let me state the feeling of a large body of clergy—both of those who, like myself, do not object to the Conscience Clause, and also of those who do—with regard to the part they are prepared to take in the education of the poorer classes. It will be admitted that the clergy have laboured, and are labouring, harder than any other body of men in the kingdom in behalf of education. And notwithstanding the excessive eagerness shown in some quarters to dispense with our assistance, we cannot see but that secular education would suffer should we withdraw, and we have no intention whatever of doing so. But what we say is this :--that only as a means to religious knowledge does it concern us to meddle with education at all, and if we cannot teach religion whilst we give secular instruction, the duty of instructing does not belong to us. We will not seem to have the care of children to whom we cannot teach the doctrine of the Incarnation, or, it might be, even the existence of God. We acknowledge the advantage of secular instruction, and most sincerely desire to see every child in the kingdom receiving such instruction, either with or without our assistance ; but do not expect ministers of religion to work for any end but religion, or to accept help on condition that we shall give up the one thing we care for. This I believe to be the feel- ing of a very large namber of clergy who are thought such bigots for their opposition to the Conscience Clause. I only differ from them inasmuch as I believe that, insert what clause you like in the title-deeds of our school-rooms, not one parent in a hundred will ever care to object to his child being taught religion. But then parents might, and those who think they will, have a right, in my opinion, to refuse to undertake the education of their children. I have already written more than you will care to print, so I cannot now enter into the question of the effect of the Conscience Clause in different parishes ; but there is ample room for discussion on that point.—I am, Sir, your obedient servant, A LANCASHIRE CURATE.

[We insert this manly letter with great pleasure, and are very sorry if any random expressions have seemed impertinently caustic. Ws have a very sincere respect for the High Church clergy, though we do not quite see that a new Mosaic dispensation as to vestments is needed.—En. Spectator.]