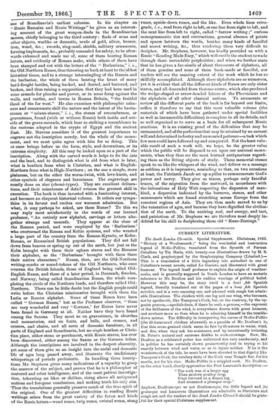 The South London Chroniek. Special Supplement. Christmas, 1866. "History of a Weathercock ;" being the wonderful and instructive legend of Medio-Pollito, translated from the Spanish of Feman Caballero by Tia Maria, with twenty-one illustrations drawn by M. S. Clark, and graphotyped by the Graphotyping Company (Limited.)— This is a translation of a little legendary tale embodied in one of Caballero's recent novels, called La Gaoiota, and illustrated with great humour. The legend itself professes to explain the origin of weather- cocks, and is generally supposed in South London to have an esoteric reference to Mr. Doulton and his sadden voerings of political belief. However this may be, the story itself is a &gni fide Spanish legend, literally translated out of the pages of a bond fide Spanish novelist, and is a very amusing one, and adorned with rough but admir- able illustrations. The chicken with one leg and one wing, who beeomes, not by apotheosis, like Tennyson's Cock, but, on the contrary, by the op- posite process,—apodiabolosis, if there be such a process, —the exponent of the fickleness of the wind, is everywhere drawn with great humour, and nowhere more so than when he is admiring himself in the tumble- down mirror. The difficulty in interpreting the career of Modio-Pollito (the ill-humoured chicken aforesaid) as a parable of Mr. Doulton's is, that this cross- grained chick earns its fate by ill-nature to water, wind, and fire, when they ask his assistance, and by intentionally irritating St. Peter's natural and extreme dislike to cock-crowings. Now, Mr. Doulton as a celebrated potter has cultivated tiro very assiduously, and in politics he has certainly shown praiseworthy zeal in trying to bit exactly between wind and water, so as to injure neither. If he is the weathercock of the tale, he must have been elevated to that dignity like Tennyson's Cock, the tutelary deity of the Cock near Temple Bar, for his merits, not for his sins. Medio-Pollito is a crippled cock. Mr. Doulton, on the other hand, clearly approaches the Poet Laureate's description :—

"The cock was of a larger egg Than modern poultry drop, Stept forward on a firmer leg, And crammed a plumper crop."

Anyhow, Doultonesqas or not Doultonesque, the little legend and its grotesque and humorous illustrations are admirable as literature and rough art, and the readers of the South London Chronicle should be grate- ful for their special Christmas supplement.