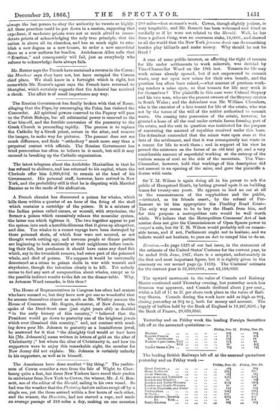 Page 3, 29 December 1866 — The House of Representatives in Congress has often had orators
Close

The House of Representatives in Congress has often had orators

who have amused us, but they have now got one so wonderful that die amuses themselves almost as much as Mr. Whalley amuses the House of Commons. Mr. Rogers, democrat, of New Jersey, who spoke of the Dred-Scott case (just eight years old) as decided "in the early history of this country," "believed that the President would go down to posterity one of the brightest jewels which ever illumined this country," and, not content with send- ing down poor Mr. Johnson to posterity as a lominiferous jewel, he answered for it that "the Almighty God would at least have his [Mr. Johnson's] name written in letters of gold on the altar of Christianity ;" but where the altar of Christianity is, and how his supporters were to enjoy this remarkable sight, the member for New Jersey did not explain. Mr. Johnson is certainly unlucky in his supporters, as well as in himself.