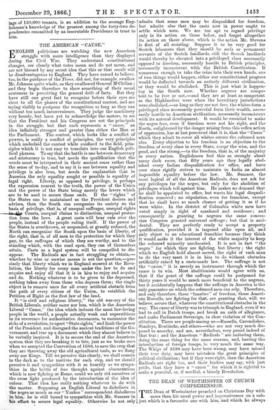 ENGLISH politicians are watching the new American struggle with more intelligence than they displayed during the Civil War. They understand constitutional changes, see clearly what votes mean and do not mean, and are not biassed by any secret idea that this or that result will be disadvantageous to England. They have ceased to believe, too, in the guidance of the Times, did not, for example, swallow Mr. Johnson quite whole, as they swallowed General M'Clellan ; and they begin therefore to show something of their usual acuteness in perceiving the general drift of facts. But they have still one great fact to recognize before their eyes are clear to all the phases of the constitutional contest, and are trying visibly to postpone the recognition as long as they can without too much inconvenience. They judge the machinery very keenly, but have yet to acknowledge the motors, to see that the President and his Congress are not the principals in the struggle, but that each represents a "cause," an idea infinitely stronger and greater than either the Man or the Parliament. The contest, which looks like a conflict of powers, is really a conflict of principles, the very principles which underlaid the contest while confined to the field, prin- ciples which it is not easy to translate into our English poli- tical phrases. To say that the battle is one between democracy and aristocracy is true, but needs the qualification that the words must be interpreted in their ancient sense rather than the sense of to-day, and to say it is one between equality and privilege is also true, but needs the explanation that in America the only equality sought or possible is equality of legal right. Liberty, as opposed to privilege, is perhaps the expression nearest to the truth, the power of the Union and the power of the State being merely the levers which are to be used to secure those ends. If the "rights" of the States can be maintained as the President desires and advises, then the South can reorganize its society on the basis of privilege, that is, of unequal suffrages, unequal rights

Courts, unequal claims to distinction, unequal protec- tion from the laws. A great caste will bear rule over the people, instead of the people ruling itself. If the power of the States is overthrown, or suspended, or greatly reduced, the North can reorganize the South upon the basis of liberty, of the right, that is, of all men to the protection for which they pay, to the suffrages of which they are worthy, and to the standing which, with the road open, they can of themselves attain. Caste as a legal system will be compelled to dis- appear. The Radicals are in fact struggling to obtain,— whether by wise or unwise means is not the question,—pre- cisely that liberty which we in England secured at the Revo- lution, the liberty for every man under the law to do and acquire and enjoy all that it is in him to enjoy and acquire and do. Nothing whatever is to be given to the depressed, nothing taken away from those who depress them; the single object is to remove once for all every artificial obstacle from the path of every citizen of the Union, to establish the Petition of Right as the first law of the land.