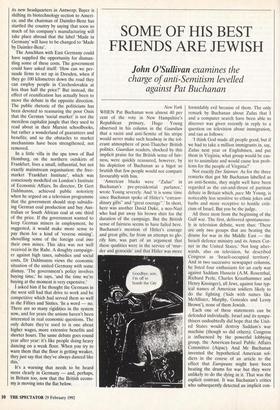 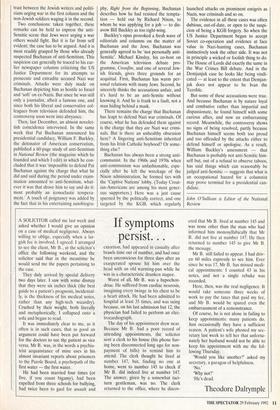 SOME OF HIS BEST FRIENDS ARE JEWISH

New York WHEN Pat Buchanan won almost 40 per cent of the vote in New Hampshire's Republican primary, Hugo Young observed in his column in the Guardian that a racist and anti-Semite of his stripe would never make such headway in the tol- erant atmosphere of post-Thatcher British politics. Guardian readers, shocked by this implicit praise for the British sense of fair- ness, were quickly reassured, however, by his depiction of Buchanan as a bigot so brutish that few people would not compare favourably with him.

'American blacks were "Zulus" in Buchanan's pre-presidential parlance,' wrote Young severely. And it is some time since Buchanan spoke of Hitler's "extraor- dinary gifts" and "great courage".' In short, here was another David Duke, a neo-Nazi who had put away his brown shirt for the duration of the campaign. But the British sense of fairness seems to have failed here. Buchanan's mention of Hitler's courage and great gifts, far from an attempt to glo- rify him, was part of an argument that these qualities were in the service of 'mur- der and genocide' and that Hitler was more formidably evil because of them. The only remark by Buchanan about Zulus that I and a computer search have been able to discover was given recently in reply to a question on television about immigration, and ran as follows: 'I think God made all people good, but if we had to take a million immigrants in, say, Zulus next year or Englishmen, and put them in Virginia, what group would be eas- ier to assimilate and would cause less prob- lems for the people of Virginia?'

Not exactly Der Stunner. As for the three

remarks that got Mr Buchanan labelled as an anti-Semite, they might well have been

regarded as the cut-and-thrust of partisan debate in Britain which, pace Mr Young, is noticeably less sensitive to ethnic jokes and barbs and more receptive to hostile criti- cism of Israel. But you be the judge.

All three stem from the beginning of the Gulf war. The first, delivered spontaneous- ly in television debate, went thus: 'There are only two groups that are beating the drums for war in the Middle East — the Israeli defence ministry and its Amen Cor- ner in the United States.' Not long after- wards, also on television, he described Congress as 'Israeli-occupied territory'.

And in two successive newspaper columns, he listed four enthusiasts for an early war against Saddam Hussein (A.M. Rosenthal, Richard Perle, Charles Krauthammer and Henry Kissinger), all Jews, against four typ- ical names of American soldiers likely to do the fighting ('kids with names like McAllister, Murphy, Gonzales and Leroy Brown'), none of them Jewish.

Each one of these statements can be defended individually. Israel and its sympa- thisers undoubtedly did hope that the Unit- ed States would destroy Saddam's war machine (though so did others). Congress

is influenced by the powerful lobbying

beating the drums for war but they were unlikely to do the dying in it. That was the explicit contrast. It was Buchanan's critics who subsequently detected an implicit con- trast between the Jewish writers and politi- cians urging war in the first column and the non-Jewish soldiers waging it in the second.

Two conclusions: taken together, these remarks can be held to express the anti- Semitic scene that Jews were urging a war others would fight. But it is far from self evident; the case has to be argued. And it is most readily grasped by those who already suspected Buchanan of anti-Semitism. This suspicion can generally be traced to his ear- lier newspaper columns criticising the US Justice Department for its attempts to prosecute and extradite accused Nazi war criminals. Attacks were duly made on Buchanan depicting him as hostile to Israel and 'soft' on ex-Nazis. But since he was still only a journalist, albeit a famous one, and since both his liberal and conservative col- leagues from television defended him, the controversy soon went into abeyance.

Then, last December, an almost novelet- tish coincidence intervened. In the same week that Pat Buchanan announced his presidential candidacy, William F. Buckley, the detonator of American conservatism, published a 60-page study of anti-Semitism in National Review (the magazine which he founded and which I edit) in which he con- cluded that it was 'impossible to defend Pat Buchanan against the charge that what he did and said during the period under exam- ination amounted to anti-Semitism, what- ever it was that drove him to say and do it: most probably an iconoclastic tempera- ment.' A touch of poignancy was added by the fact that in his entertaining autobiogra- phy, Right from the Beginning, Buchanan describes how he had resisted the tempta- tion — held out by Richard Nixon, to whom he was applying for a job — to dis- avow Bill Buckley as too right-wing.

Buckley's opus provoked a fresh wave of editorials and columns on the matter of Buchanan and the Jews. Buchanan was generally agreed to be 'not personally anti- Semitic'. Michael Kinsley, his co-host on the American television debate pro- gramme, Crossfire, and one of several Jew- ish friends, gives three grounds for an acquittal. First, Buchanan has warm per- sonal relations with many Jews. Second, he sincerely thinks the accusations unfair, and it's hard to be an anti-Semite without knowing it. And he is frank to a fault, not a man hiding behind a mask.

Buchanan has always been a strong anti- communist. In the 1960s and 1970s when anti-communism was unfashionable, espe- cially after he left the wreckage of the Nixon administration, he formed ties with the 'Captive Nations' lobby. (Today Croat- ian-Americans are among his most gener- ous supporters.) Here was a just cause spurned by the politically correct, and one targeted by the KGB, which regularly launched attacks on prominent emigres as Nazis, war criminals and so on.

The evidence in all these cases was often dubious, out-of-date, or open to the suspi- cion of being a KGB forgery. So when the US Justice Department began to accept Soviet co-operation and evidence at face value in Nazi-hunting cases, Buchanan instinctively took the other side. It was not in principle a wicked or foolish thing to do. The House of Lords did exactly the same in the War Crimes Bill debate. And in the Demjanjuk case he looks like being vindi- cated — at least to the extent that Demjan- juk does not appear to be Ivan the Terrible.

But some of these accusations were true. And because Buchanan is by nature loyal and combative rather than impartial and dispassionate, he found himself with some curious allies, and now an embarrassing record. Meanwhile, the controversy shows no signs of being resolved, partly because Buchanan himself seems both too proud and too offended by the attacks either to defend himself or apologise. As a result, William Buckley's assessment — that Buchanan is probably not anti-Semitic him- self but, out of a refusal to observe taboos, has said things which can reasonably be judged anti-Semitic — suggests that what is an occupational hazard for a columnist may prove terminal for a presidential can- didate.

John O'Sullivan is Editor of the National Review