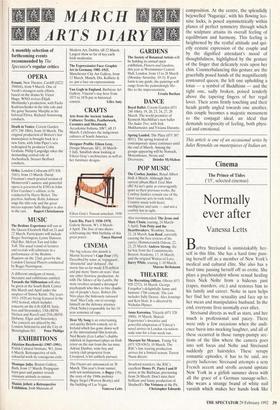 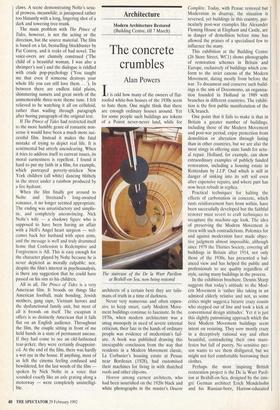 Streisand directs as well as stars, and her touch is professional and pacey. There were only a few occasions when the audi- ence burst into mocking laughter, and all of these occurred in those rumpy-pumpy sec- tions of the film where the camera goes into soft focus and Nolte and Streisand suddenly get hairstyles. These syrupy romantic episodes, it has to be said, are pretty ludicrous: Streisand attempts a sexy French accent and strolls around upstate New York in a girlish summer dress with all the grace of a German sausage-seller. She wears a strange brand of white nail varnish which makes her hands look like claws. A scene demonstrating Nolte's sexu- al prowess, meanwhile; is juxtaposed rather too blatantly with a long, lingering shot of a dark and towering tree-trunk.

The main problem with The Prince of Tides, however, is not the acting or the direction, but the source material. The film is based on a fat, bestselling blockbuster by Pat Conroy, and it reeks of bad novel. The voice-overs are clumsily construed (`The child of a beautiful woman, I was also a shrimper's son') and the dialogue is riddled with crude pop-psychology (`You taught me that even if someone destroys your whole life you can still love them. .. '). In between there are endless tidal plains,

shimmering sunsets and great swirls of the unmemorable three-note theme tune. I felt

relieved to be watching it all on celluloid, rather than wading through paragraph after boring paragraph of the original text.

If The Prince of Tides had restricted itself to the more humble genre of romantic non- sense it would have been a much more suc- cessful film. Instead it makes the fatal mistake of trying to depict real life. It is sentimental but utterly unendearing. When it tries to address itself to current issues, its moral earnestness is repellent. I found it hard to put my faith in a film, for example, which portrayed poverty-stricken New York children (all white) dancing blithely in the street under a rainbow produced by a fire hydrant.

When the film finally got around to Nolte and Streisand's long-awaited romance, it no longer seemed appropriate.

The ending was unsatisfactory and simplis- tic, and completely unconvincing. Nick Nolte's wife — a shadowy figure who is supposed tO have been having an affair with a Hell's Angel heart surgeon — wel- comes back her husband with open arms, and the message is well and truly drummed home that Confession is Redemptive and Forgiveness is All. This is easy enough for the character played by Nolte because he is never depicted as morally culpable: nor, despite the film's interest in psychoanalysis, is there any suggestion that he could have passed on his sins to his children.

All in all, The Prince of Tides is a very American film. It broods on things like American football, male bonding, Jewish mothers, gang rape, Vietnam heroes and the dysfunctional family unit, but most of all it broods on itself. The escapism it offers is so distinctly American that it falls flat on an English audience. Throughout the film, the couple sitting in front of me held hands in a state of permanent unease. It they had come to see an old-fashioned tear-jerker, they were certainly disappoint- ed. At the end of the film, there was hardly a wet eye in the house. If anything, most of us left the cinema feeling confused and bewildered, for the last words of the film — spoken by Nick Nolte in a voice that sounded exactly like an axle grating along a motorway — were completely unintelligi- ble.