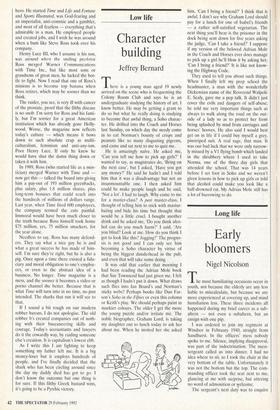 There is a young man aged 19 newly arrived on the scene who is frequenting the Colony Room Club and says he is an undergraduate studying the history of art. I know better. He may be getting a grant to do so but what he really doing is studying to become that awful thing, a Soho charac- ter. He drifted into the Coach and Horses last Sunday, on which day the needy come in to eat Norman's bounty of crisps and peanuts like so many disgusting pigeons, and came and sat next to me to quiz me.

He is amazingly naïve. He asked me, 'Can you tell me how to pick up girls?' I wanted to say, as magistrates do, 'Bring on the next case', but I asked, 'Have you got any money?' He said he hadn't and I told him that it was a disadvantage but not an insurmountable one. I then asked him could he make people laugh and he said, 'Not a lot'. I had to laugh. Why come to me for a master-class? A past master-class. I thought of telling him to stick with mastur- bating and bide his time but thought that would be a little cruel. I bought another drink and he asked me, Do you think alco- hol can do you much harm?' I said, 'Are you blind? Look at me. How do you think I got to look like this? Jogging?' The progno- sis is not good and I can only see him becoming a Soho character by virtue of being the biggest dunderhead in the pub, and even that will take some doing.

It was odd that earlier that morning I had been reading the Adrian Mole book that Sue Townsend had just given me. I felt as though I hadn't put it down. What draws such flies into Ian Board's and Norman's sticky webs? Perhaps books like Dan Far- son's Soho in the Fifties or even this column or Keith's play. We should perhaps paint in murkier colours. The older I get the more the young puzzle and/or irritate me. The noble biographer, Graham Lord, is taking my daughter out to lunch today to ask her about me. When he invited her she asked him, 'Can I bring a friend?' I think that is awful. I don't see why Graham Lord should pay for a lunch for one of Isabel's friends — a rather self-satisfied vegetarian. The next thing you'll hear is the prisoner in the dock being sent down for five years asking the judge, 'Can I take a friend?' I suppose if my version of the beloved Adrian Mole in the Coach and Horses ever does manage to pick up a girl he'll blow it by asking her, 'Can I bring a friend?' It is like not know- ing the Highway Code.

They used to tell you about such things. When I finally left my prep school the headmaster, a man with the wonderfully Dickensian name of the Reverend Walpole E. Sealy, gave me a pep talk. It didn't just cover the evils and dangers of self-abuse; he told me very important things such as always to walk along the road on the out- side of a lady so as to protect her from being splashed by mud from carriages and horses' hooves. He also said I would best get on in life if I could buy myself a grey, pinstriped suit. A real sage, that man. It was our bad luck that we were only narrow- ly missed by a VI flying bomb which landed in the shrubbery where I used to take Norma, one of the three day girls that attended the school. That was 14 years before I set foot in Soho and we weren't given lessons in how to pick up girls or told that alcohol could make you look like a half-drowned rat. My Adrian Mole still has a lot of burrowing to do.