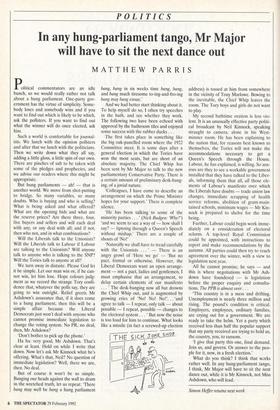 In any hung-parliament tango, Mr Major will have to sit the next dance out

Political commentators are an idle bunch, so we would really rather not talk about a hung parliament. One-party gov- ernment has the virtue of simplicity. Some- body loses and somebody wins and if you want to find out which is likely to be which, ask the pollsters. If you want to find out what the winner will do once elected, ask him.

Such a world is comfortable for journal- ists. We lunch with the opinion pollsters and after that we lunch with the politicians. Then we write down what they all say, adding a little gloss, a little spin of our own. There are pinches of salt to be taken with some of the pledges and prophecies, and we advise our readers where this might be appropriate.

But hung parliaments — ah! — that is another world. We move from shot-putting to bridge. So many variables, so many doubts. Who is buying and who is selling? What is being asked and what offered? What are the opening bids and what are the reserve prices? Are there three, four, five buyers and sellers and will each deal with any, or any deal with all; and if not, then who not, and in what combinations?

We turn away in distaste. Please God let it be simple. Let our man win or, if he can- not win, let him lose. Hope colours judg- ment as we record the strange Tory confi- dence that, whatever the polls say, they are going to win outright. Relief greets Mr Ashdown's assurance that, if it does come to a hung parliament, then this will be a simple affair because the Liberal Democrats just won't deal with anyone who cannot promise immediate legislation to change the voting system. No PR, no deal, then, Mr Ashdown?

'Don't bother to pick up the phone.'

Ha ha: very good, Mr Ashdown. That's clear at least. Hold on while I write that down. Now let's ask Mr Kinnock what he's offering. What's that, Neil? No question of immediate legislation? Well, there we are, then. No deal.

But of course it won't be so simple. Banging our heads against the wall to drum in the wretched truth, let us repeat: 'There bang may well be bang a hung parliament bang, bang in six weeks time bang, bang, and bang much tiresome to-ing-and-fro-ing bang may bang ensue.'

And we had better start thinking about it. To help myself do so, I often try speeches in the bath, and see whether they work. The following two have been echoed with approval by the bathroom tiles and enjoyed some success with the rubber ducks ...

The first takes place in something like the big oak-panelled room where the 1922 Committee meet. It is some days after a general election in which the Tories have won the most seats, but are short of an absolute majority. The Chief Whip has been sent by Mr Major to talk to the new parliamentary Conservative Party. There is a certain amount of preliminary desk-bang- ing, of a jovial nature.

'Colleagues, I have come to describe an arrangement on which the Prime Minister hopes for your support.' There is complete silence.

'He has been talking to some of the minority parties. '(Nick Budgen: 'Why?" 'and we seem to see a way of — how shall I say? — tiptoing through a Queen's Speech without mishap.' There are a couple of shouts of 'Nor

'Naturally we shall have to tread carefully with the Unionists .. . ' — There is an angry growl of 'Here we go' — `But no pact, formal or otherwise. However, the Liberal Democrats want an open arrange- ment — not a pact, ladies and gentlemen, I must emphasise that an arrangement, to delay certain elements of our manifesto . . . ' The desk-banging now all but drowns the Chief Whip out, and is augmented by growing cries of 'No! No! Nor... 'and agree to talk — I repeat, only talk — about possible — I repeat, possible — changes to the electoral system. . . 'But now the noise is too loud for him to continue. What looks like a missile (in fact a screwed-up election address) is tossed at him from somewhere in the vicinity of Tony Marlowe. Bowing to the inevitable, the Chief Whip leaves the room. The Tory boys and girls do not want to play.

My second bathtime oration is less vio- lent. It is an unusually effective party politi- cal broadcast by Neil Kinnock, speaking straught to camera, alone in his West- minster room. He has been explaining to the nation that, for reasons best known to themselves, the Tories will not make the accommodations necessary to get a Queen's Speech through the House.

Labour, he has explained, is willing. So anx- ious are they to see a workable government installed that they have talked to the Liber- als, informing them that all, all those ele- ments of Labour's manifesto over which the Liberals have doubts — trade union law changes, immediate scrapping of health service reforms, abolition of grant-main- tained schools, minimum wages — Mr Kin- nock is prepared to shelve for the time being.

Further, Labour could begin work imme- diately on a consideration of electoral reform. A top-level Royal Commission could be appointed, with instructions to report and make recommendations by the autumn. All parties could then try to reach agreement over the winter, with a view to legislation next year.

All he cannot promise, he says — and this is where negotiations with Mr Ash-

down have foundered — is legislation before the proper enquiry and consulta- tions. The PPB is almost over . . .

'This country is in a mess and drifting. Unemployment is nearly three million and rising. The pound's condition is critical.

Employers, employees, ordinary families, are crying out for a government. We are ready to take the helm. Yet a party which received less than half the popular support that my party received are trying to hold us, the country, you, to ransom.

'I give that party this one, final demand. Join us, and govern. Or answer to the peo- ple for it, now, in a fresh election.'

What do you think? I think that works rather well. In any hung-parliament tango, I think, Mr Major will have to sit the next dance out, while it is Mr Kinnock, not Miss Ashdown, who will lead.