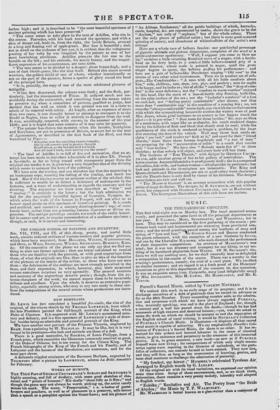 Mr. LEWIS has just completed a beautiful fiw-simile, the size of the original, of the crayon sketch by Sir THOMAS LAWRENCE, from which the late President painted the full-length portrait of the King, when Duke of Clarence. It is engraved with Mr. LEwrs's accustomed accu- racy and delicacy, and is a fine specimen of LAWRENCE'S style of draw- ing_ besides being an admirable and graceful portrait of the King.

We have another new portrait of the Princess Victoria, engraved by EGAN, from a painting by W. NICHOLAS. It may be like, but it is very formal in its prettiness—the look and attitude are those of a doll.

There is a good mezzotint, by ROGERS, of Louis Philippe, from a French print, which resembles the likenesses commonly received as good, of the Duke of Orleans, but is too young for the Citizen King. The French lithographs of the King of the French and his Family, and of Lafayette and the heroes of the Revolution, are numerous, and for the most part clever.

A delicately stippled miniature of the Baroness Durham, engraved by TRomesole after a picture by LAWRENCE, adorns La Belle Assemblee for February.