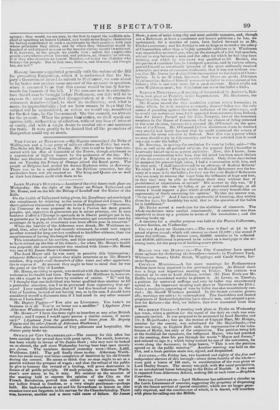 and a large party of military officers on Friday last week. The Duke left Brighton on Monday. His visit is said to have been con- nected with his office of Constable of the Tower, though attributed to a negotiation of highest import by the quidnuncs of the day. The Duke and Duchess of Gloucester arrived at Brighton on Saturday; and on Tuesday the Prince of Orange joined the Royal party. The people of Belgium had settled his Serene Highness down at Antwerp. There was to be a splendid fete at the Pavilion yesterday, but the particulars have not yet reached us. The King and Queen are as well as their best friends could wish them to be.