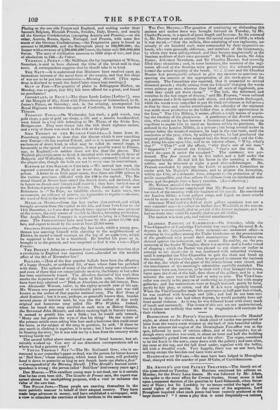 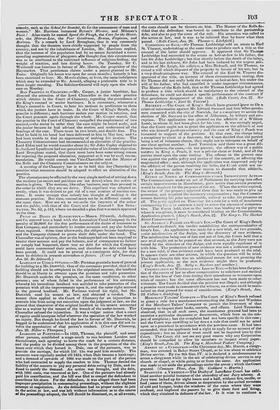 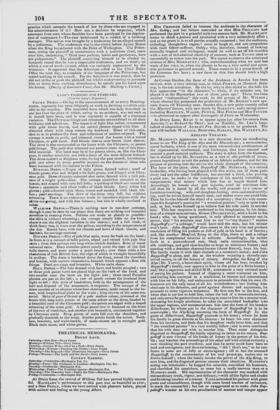 MR. ARNOLD'S AND THE PATENT THEATRES.—The fourth act of ,

this piece closed on Tuesday. Mr. Harrison continued his address on Monday, for the Drury Lane lessees. He was followed by Mr. Adam, who spoke to the same effect for Covent Garden. Great stress is laid upon a supposed decision of the question by Lord Sidmouth, when Secre- tary of State ; but his Lordship by no means settled the legal or the moral rights of the parties. In the course of the argument, Lord Brougham inquired what stock pieces had been recently produced at the. large theatres ? " I mean a play that is acted frequently-4 rations

the King's counsel or senior barristers. It is customary, whenever a Thomas Lethbridge v. Earl St. Vincent.) . i practice. (King's Bench, Jan. 25. The King v. Steward.)

tenant then applied to the Court of Chancery for an injunction to MERCHANT TAILORS' Coltraary.—The Court of King's Bench refused restrain him from suing out execution upon the judgment at law, on the to grant a rule for a mandamus commanding the Master and Wardens ground that the-waiver of the original landlord to his tenant amounted of the Merchant Tailors' Company to permit the liverymen of that also to a waiver by the tenant of the breach of the under-tenant. The Company to inspect their books, records, and affairs. Lord Tenterden Chancellor refused the injunction. It was a vulgar notion that a court observed, that in all such cases, the mandamus granted had been to of equity could interpose relief wherever the operation of the law worked examine a particular document or documents, which bore on the sub- an injury. But though he found the law in favour of Mr. Dunwich, he ject of complaint ; but the complaint had not been specific in this case ; begged to be understood that his application of it in this case did not in- and the Court was unwilling to lay down a rule that could not be acted volve the approbation of that person's conduct. (Court of Chancery, upon as a precedent in accordance with the previous cases. It had been

Jan. 26. Hillier v. Thompson.) contended, that the applicants had a right to apply for an account of the

the Rolls and the Chancery Commissioners on the subject. magisterial office ; and, although the application was supported only by A meeting of the Chancery bar is to be held this day (Saturday) to the affidavit of the person receiving the bribe, the Court could not re- consider what measures should be adopted to effect an alteration of the fuse to interfere unless they saw reason to discredit that affidavit.

The alterationrnaybe effected by the very simple method of setting down EFFECT OF NOTICE BY COMMISSIONERS UNDER IMPROVEMENT ACTS■ the motions (as causes and petitions are set down) when the notice of The Commissioners under an act of Parliament for carrying into effect motion is given. The motions, like other business, may then proceed in certain improvements in Manchester, gave notice that certain premises the order in which they are set down. This expedient was adopted re- would be required for the purposes of tile act. \nen the notice expired, cently, when it was desired to get rid of a vast number of ancient mu- the owner of the property apprized them that he was ready to give up tions. It seems strange that nobody has thought of making it the possession, and required the necessary compensation ; but the Commis- common practice. But then; counsel must not be in different courts at sinners deeming his price unreasonable, refused to take his premises at the same, time. How are we to reconcile the interests of the suitor all. The party applied on Thursday for a rule for a writ of mandamus and the public, with that of the Court and the Counsel ? See SPEC- commanding tfieiti to summon a jury to assess the amount of compeesa- TA TOR, No. 52, p.412, where we detailed a plan that was much approved tion. The Conn held, that as the notice was binding on the party to at the time. whom it was given, it must be considered binding on the Coinmisioners. PneoF OF DEBTS IN Basertuercia—Messrs. Dilworth, Arlington, Application granted. (King's Bench, Jan. 27. The King v. The Market and Co. entered into a bond with the Lancashire Canal Company in the Street Coninziscionees.) penalty of 20,000/. for the due performance of the duties of treasurer to Sr. ANDREW'S PARISH AND Galy's INN.—The Court of King's Bench that Company, and particularly to render accounts and pay the balance has refused to disturb the verdict establishing the extraparochiality of when required. Some time afterwards, the obligors became bankrupts, Gray's Inn. An application was made for a new trial, on two grounds, and the Company claimed to prove their debt under the bond. The —the misdirection of the Judge, and the discovery of new evidence. Chancellor was of opinion that as the bankrApts had not been required to The misdirection being one of fact and not of law, the Court held that a render their account and pay the balance, and of consequence no failure new trial ought not to be granted on that account, as the Jury were not to comply had happened, there was no debt for which the Company Wind by the direction of the Judge, and were equally cognizant of it could have commenced their action, and therefore no debt could have with him. The production of new evidence was not a sufficient ground been proved. It could not be proved as a contingent debt, for that for a new trial, if that evidence could have been produced at the trial. must be debitztin in presenti solvendwn in falitro. (Court of Chancery, It appears there are other actions, in which the question will be tried. practice which compels the breach of law by those who are engaged in the administration of it ? How can a decision be respected, which emanates from men whose faculties have been paralysed by the deprive- tion of sustenance P—The case terminated by a verdict of a farthing damages. The action was brought by a tradesman for an alleged assault by a policeman. The tradesman was in the crowd before Apsley House when the King breakfasted with the Duke of Wellington. The Police- man, seeing the plaintiff in conversation with a notorious thief, came near him, exclaiming," Mind your pockets, ladies and gentlemen, here are pickpockets." The plaintiff, conceiving himself to be alluded to, instantly stated that he was a respectable tradesman, and no thief ; on which a war of words ensued, which was variously represented by the witnesses. It appeared that the defendant called at the Chief Police Office the next day, to complain of the language of the Policeman, but stated nothing of the assault. For the defendant it was stated, that he did not strike or push the plaintiff, but whilst endeavouring to persuade him to desist from exciting disturbance, he merely put his hand upon his breast. (Duchy of Lancaster Court,Jan.26. Stocking v. Carter.)