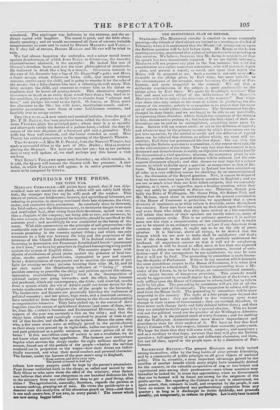 OPINIONS OF THE PRESS. THE TITHE WAR.

MonNix.G CHRONICLE—All jurists have agreed, that if two ship. Wrecked men are seated on one plank, which will not safely hold them both, the stronger may (we say he will) push off ,the weaker. This theory of jurist, our landowners, farmers, and agricultural labourers, are reducing to practice, in shoving overboard their late shipmates, the vicar, rector, and extensive titlie connexions. As somebody must be drowned, the Irish sailors, says the Hibernian story, in imminent danger in an open and overloaded boat, after rising from their devotions, agreed twm. con. that.a chaplains of the company, not being able to row, and moreover, by Iris own account, the best prepared for futurity, should be sacrificed to the common good ; and accordingly he was committed to the bosom of the ocean. 'With this commentary on the principle of self-preservation—the unalterable rule of human action—we resume our critical notice of the crusade preaching in the country against tithes ; and which can only terminate in a holy war between the laity and the proprietors of the revenue's of the Church Establishment. If in Ireland events are fast hastening to destruction the Protestant Established Church ".guaranteed at tire Union," we have lay preachers in England haranguing every parish against tire system of English tithes. The country papers teem with reports of resolutions of grand juries against the pressure . of local tax- ation, revolts against church-rates, superadded to poor and county levies ; -determination of ratepayers not to sanction the expense of gas- light fur evening services - parsons lowering their tithe 10, 15, and 25 per cent. .under the illuminating influence of " Swing ;" whole parishes meeting to proscribe the clergy and petition against this odious, oppressive, overwhelming impost ! Such is the decomposition of spiritual society now going forwards ; such the effect long foreseen and predicted, which our contemporary, the Globe, well effect, results from •a system which the wit of Atheist could not better devise for the certain eradication of the religious ties of the people to the hierarchy. The landowners and ;farmers are practically learning the rudiments of political economy • and low prices, high rents, and a restricted currency, have revealed to them that the clergy belong to the classes distinguished as 'mnproduclive labourers. They have picked up, in the course of their inquiries into the causes of agricultural distress (and some of them, may be, from Mr. Cobbett's Sermons and Ecclesiastical Histories), that the support of the poor was anciently a lien on the tithe ; and that the clergy have silently and cunningly contrived by process of time to get rid of that burden and shuffle it on the laymen. Hence the same men who, a few years since, were as willingly pewed in the parish-church as .their sheep were penned up in night-folds, halloo out against a hired and paid priesthood as a public nuisance, the sooner gotten rid of the better ! If this marvellous state of society is not a revolution, we do not know what merits that appellation. The farmers now everywhere inquire what services the, clergy render for eight millions sterling per annum, forced out of the pockets of the people—whether the services rendered are in proportion to the wages—how their duties are indivi- difally executed, and what their moral conduct and personal character. The farmer, under the harrow of the poor man's song in England, "Hang sorrow, and drive away care, The parish is bound to find us,"

reflects how many pauper's could be kept by the parson's possessions.

From former unlimited faith in the clergy, as called and moved by the Holy Ghost to take upon them the office of the Ministry, what farmer now believes that above one clergyman in one hundred dedicates his life to the ministry from any other motive than to get a good living, alias tithes ? The agriculturist, naturally, therefore, regards the parsons as a money-seeking, grasping set of men. He views the parish-spire as a deserter eyes the sentry-box of his obnoxious guard on duty--and there is one such sentry-box, if not two, in every parish ! The scenes which are now acting beggar belief.