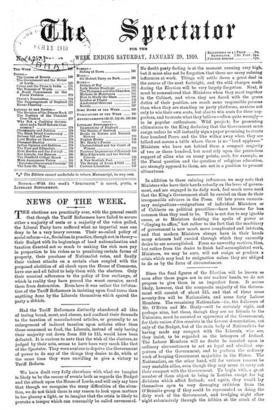 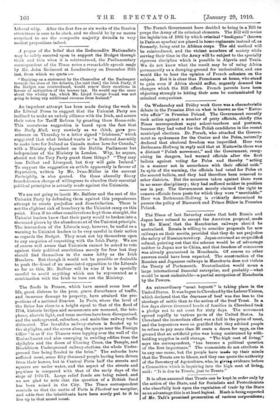 Page 1, 29 January 1910 — Since the final figures of the Election will be known
Close

Since the final figures of the Election will be known

so soon after these pages are in our readers' hands, we do not propose to give them in an imperfect form. It seems likely, however, that the composite majority of the Govern- ment will consist of about 115, and that of these some seventy-five will be Nationalists, and some forty Labour Members. The remaining Nationalists—i.e., the followers of Mr. O'Brien and Mr. Healy—will be certainly eight, and perhaps nine, but these, though they are no friends to the Unionists, must be counted as opponents of the Government, for their raison d'être consists in the fiercest denunciation, not only of the Budget, but of the main body of Nationalists for having made any compact with the Liberals, who are, they insist, to be regarded as the betrayers of Ireland. The Labour Members will no doubt be counted upon in ordinary circumstances to act as loyal and obedient sup- porters of the Government, and to perform the ordinary work of keeping Government majorities in the House. The Nationalists, on the other hand, will for various reasons be very unstable allies, even though they may mean to carry out their compact with the Government. To begin with, a great number of them object to being in London except for big divisions which affect Ireland; and again, they would lay themselves open to very damaging criticism from the O'Brienite group if they could be represented as doiug the dirty work of the Government, and trudging night after night submissively through the lobbies at the crack of the Liberal whip. After the first five or six weeks of the Session attendance is sure to be slack, and we should be by no means surprised to see the composite majority dwindle to very modest proportions indeed.