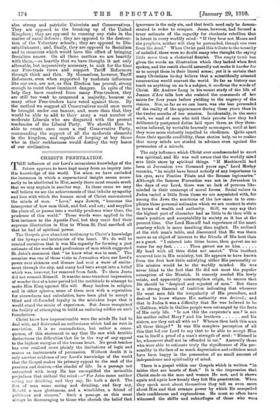 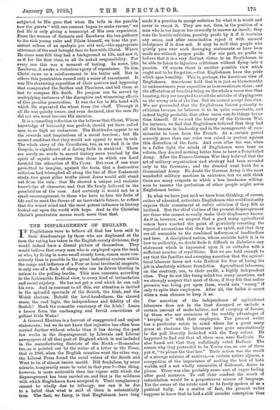 THE influence of our Lord's miraculous knowledge of the future appears to have kept many from an inquiry into His knowledge of the world. Yet when we have excluded the instances in which a supernatural insight seems neces- sarily to be attributed to Him, surely there must remain much that we may explain in another way. In these cases we may well believe we see the achievements of that infinite sympathy and love with which the human mind of Christ encountered the minds of men. "Love," says Jowett, " becomes the interpreter of how men think, and feel, and act ; and supplies the place of, or passes into a worldly prudence wiser than, the prudence of this world." These words were applied in the first instance to the Apostle Paul, but they must find their supreme illustration in Him to Whom St. Paul ascribed all that he had of spiritual power.

The Gospels give abundant testimony to Christ's knowledge of the byways and intricacies of the heart. We do well to remind ourselves that it was His capacity for forming a just estimate of the words and professions of men which suggested St. John's comment that "he knew what was in man." The occasion was one of those visits to Jerusalem when our Lord's power over sickness and disease had seat a wave of excite- ment through the city, and many had been swept into a belief whieh was, however, far removed from faith. To them Jesus did not commit. Himself. It was the same transient impression of wonder that at a later period led the multitude to attempt to make Him King against His will. Many leaders in religion and in other spheres, some of them men with a reputation for shrewdness and calculation, have been glad to accept a blind and ill-founded loyalty in the mistaken hope that it would stand the strain of experience. But Jesus recognised the futility of attempting to build an enduring edifice on such foundations.

Christ knew how impressionable were the minds He had to deal with, and distrusted an enthusiasm which had no root in conviction. It is no contradiction, but rather a conse- quence, of this statement to say that He saw with terrible distinctness the difficulties that lie in the way of any appeal to the highest energies of the human heart. No great teacher has ever realised more plainly the limitations of logic and reason as instruments of persuasion. Without doubt it is only another evident,* of our Lord's knowledge of the world that the Gospel makes its primary appeal to the seat of the passions and desires,—the citadel of life. In a passage not untouched with irony He has exemplified the invincible prejudices that enthral the mind :—" For John came neither eating nor drinking, and they say, He hath a devil The Sen of man came eating and drinking, and they say, BeLold a man gluttonous, and a winebibber, a friend of publicans and sinners." Such a passage as this must always be discouraging to those who cherish the belief that ignorance is the only sin, and that truth need only be demon- strated in order to conquer. Jeans, however, had formed a truer estimate of the capacity for obstinate rebellion that is latent in every worldly mind : "Ii they hear not Moses and the prophets, neither will they be persuaded, though one rose from the dead." When Christ paid this tribute to the tenacity of unbelief, there were no doubt many who thought the saying little more than a rhetorical flourish. The empty tomb has given the words an illustration which they lacked when first spoken, and the result should assuredly not make it harder for us to accept them in their literal sense; yet it is certain that many Christians to-day believe that a scientifically attested resurrection would convert the world. So far as history can teach us anything on su..h a subject, it confirms the wards of Christ. Mr. Andrew Lang in his recent study of the life of Jeanne d'Arc tells how she resisted the commands of her saints for four years before yielding to the urgency of the visions. Nor, so far as we can learn, was she less persuaded of the reality of the appearances during these years than in the twelve months of her mission. Incidentally, in the same work, we read of men who told their priests how they had deliberately postponed duties laid upon them, as they them- selves believed, by veritable heavenly messengers, until at last they were more violently impelled to obedience. Quite apart from their specific credibility, these stories help us to realise that many minds are steeled in advance even against the persuasion of a miracle.

The only influence which Christ ever condescended to exert was spiritual, and He was well aware that the worldly mind sets little store by spiritual things. "If Machiavelli had been at Jerusalem two thousand years ago," Lord Morley remarks, "he might have found nobody of any importance in his eyes, save Pontius Pilate and the Roman legionaries." Although the famous Florentine was not in Jerusalem in the days of our Lord, there was no lack of persons like- minded in their contempt of moral forces. Social values in Judea varied a little from those we are acquainted with, for among the Jews the sanctions of the law came in to com- plicate those personal estimates which we are content to state in terms of wealth and authority. Still, we may say that the highest part of character had as little to do then with a man's position and acceptability in society as it has at the present time. Our Lord Himself had experience of the scant courtesy which is more insulting than neglect He reclined at the rich man's table, and discovered that He was there more as an object of interest to the friends of His host than as a guest. "I entered into thine house, thou gayest me no

water for my feet,. Thou gayest me no kiss. My head with oil thou didst not anoint." This incident occurred late in His ministry, but He appears to have known from the first how little satisfying either His personality or His mission would be to the worldly minded. He was never blind to the fact that He did not meet the popular conception of the Messiah. It scarcely needed His lowly estate, and apparently commonplace origin, to ensure that He should be "despised and rejected of men." But there is a strong filament of tradition indicating that wherever He went men felt the irregularity of His procedure, and desired to know whence His authority was derived ; and that in Judea it was a difficulty that He was believed to be a Galilean, while in Galilee people were estranged by the facts of His early life. "Is not this the carpenter's son ? is not his mother called Mary ? and his brethren and his sisters, arc they not all with us ? Whence then bath this man all these thinge ? " It was His complete perception of all this that led our Lord to say that to be able to accept Him was in itself a proof of a man's strength of soul : "Blessed is he, whosoever shall not be offended in me." Assuredly those who were able to estimate truly the significance of His per- sonality in the face of so much depreciation and criticism must have been happy in the possession of no small amount of independence and spirituality of mind.

There is a gospel within our Gospels which is written "in tables that are hearts of flesh." It, is the impression that Christ made on the men and women He met, and it ahows again and again how keenly they felt His penetration. When they speak most about themselves they tell us even more about Him and that strange power by which He compelled their confidences and explanations. He must so often have witnessed the shifts and subterfuges of those who were

subjected to His gaze that when He tells in the parable how the guests "with one consent began to make excuse," we feel He is only giving a transcript of His own experience. From the woman of Samaria and Zacchreus the tax-gatherer to the rich young ruler and Pilate himself, we hear the per- sistent echoes of an apologia pro vita suci,—the appropriate utterance of the soul brought face to face with Christ. Where Be came men felt they had a background to life, and saw it as if for the faint time, in all its naked responsibility. For every one this was a moment of testing. In some, like Zacchmus, it awoke a victorious agony of repentance. To him Christ came as a reinforcement to his better self. But in others this penetration roused only a sense of resentment. It was His shattering exposition of their motives and hypocrisy that exasperated the Scribes and Pharisees, and led them at last to compass His death. No purpose can be served by multiplying instances of the disruptive and winnowing effects of this peculiar penetration. It was the fan in His hand with which He separated the wheat from the chaff. Through it all He was quietly aware, and even declared, that the men He did not win must become His enemies.

It is a consoling reflection to the believer that Christ, Whose knowledge of humanity was perfect, should yet have called men to so high an endeavour. The Beatitudes appear to us the rewards and inspirations of a moral heroism ; but He seemed confident that they would not appeal to men in vain. The whole story of the Crucifixion, too, as we find it in the Gospels, is significant of a daring faith in mankind. There are surely no words in sacred history more touched by the spirit of mystic adventure than those in which our Lord foretold the attraction of His Cross. But even if one were permitted to imagine, against the facts, that a destructive criticism had triumphed all along the line of New Testament study, two great pillar truths about Jesus would still stand out fr.-sn the ruin: that He showed a unique and realistic knowledge of character, and that He firmly believed in the possibilities of the race. And certainly it would not be a small encouragement, to those who have to face the facts of life and to meet the threat of an inscrutable future, to reflect that the wisest mind and the most potent influence in history looked out upon the world with hope. And to the Christian Christ's penetration means much more than that.