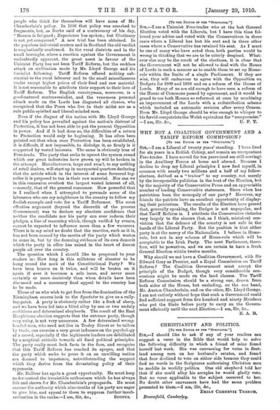 should like to ask if any of your readers can suggest a verse in the Bible that would help to solve the following difficulty in which a friend of mine found herself last week. She was canvassing for votes in Scot- land among men on her husband's estates, and found that four declined to vote on either side because they could find no words in the Scriptures authorising Christian men to meddle in worldly politics. One old shepherd told her that if she could allay his scruples he would gladly vote. But no verse applicable to the subject occurred to her. No doubt other canvassers have had the same problem presented to them.—I am, Sir, &c.,