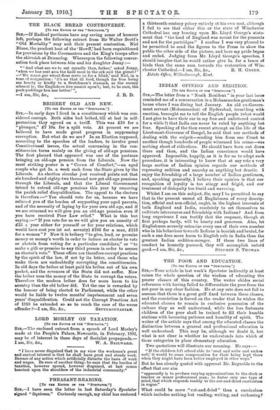 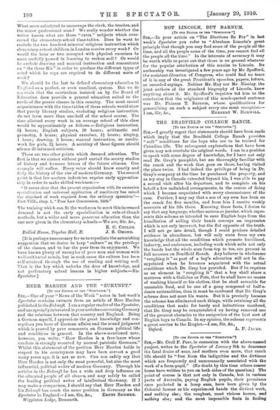 THE POOR AND EDUCATION. [To THE EDITOR OF THE "srzerkros.."1

raises the whole question of the wisdom of educating the poorer classes of this country. The writer chides social reformers with having failed to differentiate the poor from the not-poor in any clear fashion. He at any rate does not fail to assume that there is a great gulf fixed between these classes, and the conviction is forced on the reader that he wishes the educated classes to remain in exclusive possession of the culture they so well understand, while the less fortunate children of the poor shall be trained to fill their humble stations with becoming patience and humility of spirit. The writer of the article says that among the educated classes the distinction between a general and professional education is well understood. This may be, although we doubt it, but what is not clear is whether he understands into which of these categories to place elementary education.

Two quotations will illustrate our meaning. He says :—

"If the children left school able to read and write and reekos well,' it would be some compensation for their being kept there when they might have been better employed in other ways."

But he has already quoted with approval Mr. Reynolds to the effect that our aim

"apparently is to produce varying approximations to the clerk or teacher or minor professional man • to fostor only one type of mind, that which responds readily to ; the cut-and-dried curriculum in vogue."

What could be more ." cut-and-dried " than a curriculum which includes nothing but reading, writing, and reckoning?

What more calculated to encourage the clerk, the teacher, and the minor professional man P We really wonder whether the writer knows what are these " extra " subjects which over- crowd the elementary-school time-tables. Does he want to exclude the two hundred minutes' religions instruction which elementary-school children in London receive every week P Or would the hour or two occupied with physical exercises be more usefully passed in learning to reckon well ? Or would he exclude drawing and manual instruction and concentrate en"the three R's" in order to produce the different types of mind which he says are required to do different sorts of work ?

We should be the last to defend elementary education in England as a perfect, or even excellent, system. But we do iva.ntain that the curriculum insisted on by the Board of Education does provide a general education suited to the needs of the poorer classes in this country. The most casual acquaintance with the time-tables of these schools would show that purely literary studies, excluding religious instruction, do not form more than one-half of the school course. The time allotted every week in an average school of this class would be approximately as follows :—Religious instruction, 34 hours; English subjects, 10 hours; arithmetic and geometry, 5 hours; physical exercises, 14 hours ; singing, 1 hour ; drawing, 2 hours ; manual instruction, or needle- work for girls, 24 hours. A scrutiny of these figures should silence ill-informed criticism.

There are two other points which demand attention. The first is that we cannot without peril curtail the scanty studies of history and humane letters of the future citizens. One example will suffice. Every voter should know exactly and fully the history of the rise of modern Germany. The second point is that few modern industries require early apprentice- ship in order to make skilled workmen :— " It seems clear that the present organisation with its excessive specialization and universal application of machinery has raised the standard of work required from the ordinary operative."— Part VIII., chap. 1, "Poor Law Commission, 1900."

The training which can fit the workman to meet this increased demand is not the early specialisation in rule-of-thumb methods, but a wider and more generous education than the one now given in the elementary schools.—We are, Sir, &c.,

[It is perhaps unnecessary for us to repudiate the astonishing suggestion that we desire to keep "culture" as the privilege of the classes, and to bar the poor from its enjoyment. We have known plenty of examples of poor men and women with well-cultivated minds, but in such cases the culture has been self-attained tht eugh the use of reading and writing well. That is the key which unlocks the door of knowledge, and not perfunctory school lessons in higher subjects.—En. Spectator.)