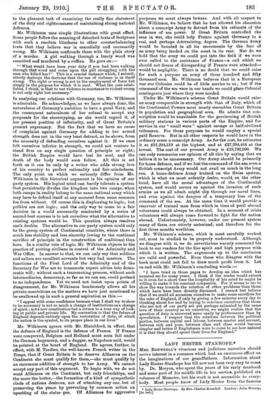 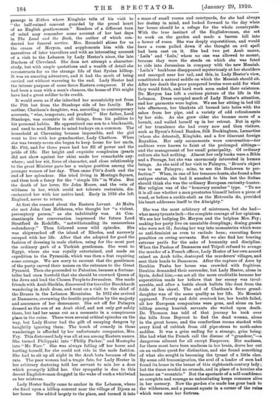 revive interest in a romance which had an enormous effect on the imaginations of our grandfathers. Information about Lady Hester Stanhope has till now not been very easy to come by. Dr. Meryon, who spent the years of his early manhood and some part of his middle life in her service, published six volumes of Memoirs, but his work is not accessible to every- body. Most people know of Lady Heater from the famous

passage in Eiithen where Kinglake tells of his visit to "the half-ruined convent guarded by the proud heart of an English gentlewoman." Readers of a different turn of mind may remember some account of her last days in The Land and the Book, the author of which con- ducted her funeral service. Mrs. Roundell skims for us the cream of Meryon, and supplements him with the narratives of later travellers and with an interesting account of a visit to the Lebanon by Lady Hester's niece, the late Duchess of Cleveland. She does not attempt a character- study, but with ample quotations and a wealth of detail she reconstructs for us the strange life of that Syrian hilltop. It was an amazing adventure, and it had the merit of being carried out without wavering to the end. Lady Hester had the intense purpose of some fierce Eastern conqueror. If she had been a man with a man's chances, the house of Pitt might have had a great soldier to its credit.

It would seem as if she inherited her eccentricity not from the Pitt but from the Stanhope side of her family. Her mother, Chatham's daughter, was, according to contemporary accounts, "wise, temperate, and prudent." Her father, Lord Stanhope, was eccentric in all things, from his politics to his personal habits. He apprenticed one son to a blacksmith, and used to send Hester to mind turkeys on a common. The household at Chevening became impossible, and the girl went to live with her grandmother, Lady Chatham. When she was twenty-seven she began to keep house for her uncle, Mr. Pitt, and for three years had her fill of power and the pride of life. Her height and exquisite complexion (pearls did not show against her skin) made her remarkable any- where; and her wit, force of character, and close relationship to the great Minister gave her a unique position among the younger women of her day. Then came Pitt's death and the end of her splendour. She tried living in Montagu Square, and then took a fancy for the "simple life" in Wales. But the death of her lover, Sir John Moore, and the vein of wildness in her, which could not tolerate restraints, dis- enchanted her with her native land. Early in 1810 she left England, never to return.

At first she roamed about the Eastern Levant. At Malta she met John Cam Hobhouse, who thought her "a violent, peremptory person," as she indubitably was. At Con- stantinople her conversation impressed the future Lord Stratford de Redcliffe, "notwithstanding its measureless redundancy." Then followed some wild episodes. She was shipwrecked off the island of Rhodes, and narrowly escaped with her life. After that she adopted for good the fashion of dressing in male clothes, using for the most part the ordinary garb of a Turkish gentleman. She went to Egypt, where she was royally entertained, and made an expedition to the Pyramids, which was then a feat requiring some courage. We are sorry to recount that the gentlemen of the party carved their names on the entrance to the Great Pyramid. Then she proceeded to Palestine, because a fortune- teller had once foretold that she should be crowned Queen of the Jews and lead the Chosen People to Jerusalem. She made friends with Arab Sheikhs, discovered the traveller Burckhardt wandering in Arab dress, and went on a visit to the chief of the Druses in the Lebanon Mountains. In 1812 she arrived at Damascus, overawing the hostile population by the majesty and assurance of her demeanour. She set off for Palmyra dressed as the son of an Arab chief, and not only got safely there, but had her name cut as a memento in a conspicuous place in the ruins. There were several critical episodes on the way, but Lady Hester had the gift of escaping dangers by haughtily ignoring them. The touch of comedy in these wanderings is afforded by her unfortunate companion, Mrs. Fry. This distressed lady was all at sea among Eastern names. She turned Philippaki into "Philip Parker," and Mustapha into "Mr. Farr." She was always falling off her horse and hurting herself, for she could not ride in the male fashion. She had to sit up all night in the Arab huts because of the rats. The poor woman had a tragic fate, for Lady Hester in her arbitrary doctoring told her servant to mix her a dose which promptly killed her. Our sympathy is due to this decent Englishwoman dragged in the wake of such a whirlwind as her mistress.

Lady Hester finally came to anchor in the Lebanon, where she fixed upon a hilltop convent near the village of Djoun as her home She added largely to the place, and turned it into a maze of small rooms and courtyards, for she had always her destiny in mind, and looked forward to the day when her house should be a refuge for the whole countryside. With the true instinct of the Englishwoman, she set to work on the garden and made a barren hill into a bower of roses. She was deeply superstitious, and would have a room pulled down if she thought an evil spell had been cast on it. She had two pet Arab mares, Laila' and 'Lulu,' whom no one was allowed to mount, because they were the steeds on which she was fated to ride into Jerusalem in company with the new Messiah. Ladle's ' backbone disappeared mysteriously at her shoulders and emerged near her tail, and this, in Lady Hester's view, constituted a natural saddle on which the Messiah should sit. After her death the poor pampered brutes were sold for what they would fetch, and bard work soon ended their existence. Dr. Meryon has left a curious picture of the life in the Lebanon. Dress occupied much of Lady Hester's attention, and her garments were legion. We see her sitting in bed till late afternoon, her blankets all burned into holes with the ashes from her pipe, and a variety of odd refreshments by her side. As she grew older she became more of a hermit, and walled herself up in her retreat. But in spite of her truculence she had every now and then visitors, such as Byron's friend Bankes, Silk Buckingham, Lamartine (whom she detested), Kinglake, and a few itinerant foreign Royalties. Her only amusements were conversation—her auditors were known to faint at the prolonged sittings— and the management of her small principality. Of ordinary culture she had nothing. Almost her only books were a Bible and a Peerage, but she was enormously interested in human beings. As she said of her visit to Palmyra, "Bruce's object was to see Palmyra ; mine, to see the Bedaween to per- fection." When, in one of her treasure-hunts, she found a fine antique statue, she had it smashed to bits lest the Sultan should think she was the ordinary European curiosity-hunter. Her religion was of the "honorary member" type. "To me it is all one whether a man prostrates himself before a piece of wood, or before a cockle-shell as the Metonalis do, provided his heart addresses itself to the Almighty."

She was the most arbitrary of mistresses, but she had— what manytyrants lack—the complete courage of her opinions. We see her bullying Dr. Meryon and the helpless Mrs. Fry ; making her party live on uneatable dumplings; dosing guests who were not ill; forcing her way into monasteries which were so anti-feminist as even to exclude hens ; executing fierce penalties on erring servants. But we also find her braving extreme perils for the sake of humanity and discipline. When the Pashas of Damascus and Tripoli refused to avenge the murder of a French officer, Lady Hester of her own accord raised an Arab tribe, destroyed the murderers' villages, and sent their heads to Damascus. After the capture of Acre by Ibrahim Pasha her house was crowded with fugitives. Ibrahim demanded their surrender, but Lady Hester, alone in Syria, defied him,—an act all the more creditable because her superstition made her believe that her enemy was invul- nerable, and after a battle shook bullets like dust from the folds of his shawl. The end of Chatham's fierce grand- daughter was of the same quality as her life. No Messiah appeared. Poverty and debt overtook her, her health failed, all her European companions were gone, and alone on her hilltop among knavish servants she waited upon death. Dr. Thomson has told of that journey he took over the hills from Beyrout to find the dead woman, alone in the great house, and the comfortless rooms stacked with every kind of rubbish from old pipe-stems to moth-eaten saddles. It was a grim ending for a strange, grim being. She had what the French call the disease of " grandeur,"—a dangerous ailment for all except Emperors. Her madness, for there must have been madness in her brain, drove her out on an endless quest for distinction, and she found something of what she sought in becoming the tyrant of a little clan. By some odd transmigration, the soul of a leader of men had found its home in the breast of this eighteenth-century lady ; but the times needed no crusade, and in place of a heroine she became an "eccentric." But the spectacle of a self-confidence so complete and courage so unhesitating keeps romance alive in her memory. Now the garden she made has gone back to the wilderness, and a peasant squats in a corner of the ruins which were once her fortress,