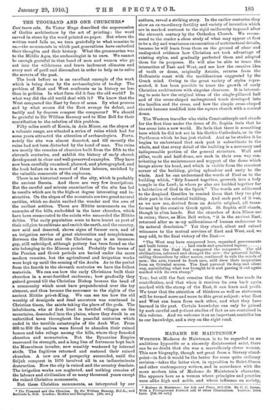 THOUSAND AND ONE CHURCHES.* Ceci tuera cela. So Victor Hugo

described the supersession of Gothic architecture by the art of printing : the word carved in stone by the word printed on paper. But where the written word fails us, we turn gratefully to what remains to us.—the monuments in which past generations have embodied their thoughts and their history. What the grammarian was to the Middle Ages, the archaeologist is to ours- We cannot be enough grateful to that band of men and women who go out into the wilderness and brave inclement climates and every sort of peril and discomfort in order to help us to solve the secrets of the past.

The book before us is an excellent example of the work which is being done by the archaeologists of to-day. The problem of East and West confronts us in history no less than in politics. In what form did it face the old world? In what way did the old world deal with it ? We know that the West conquered the East by force of arms. By what process and by what means did the East avenge its defeat, and tacitly and by degrees conquer the conqueror? We should be grateful to Sir William Ramsay and to Miss Bell for their contribution to the solution of this problem.

Fifty miles south of Konia, in Asia Minor, on the slopes of a volcanic range, are situated a series of ruins which had for some years attracted the attention of archaeologists. Fortu- nately the site was almost deserted, and till recently the ruins had not been disturbed by the hand of man. The ruins are mostly the remains of churches built from the fifth to the eleventh centuries, and exhibit the history of early church development in clear and well-preserved examples. They have now been carefully examined, planned, and photographed, and the book before us is a record of these labours, enriched by the valuable comments of the explorers.

There is no historical record of the city, which is probably the ancient Berate. And there are very few inscriptions. But the careful and minute examination of the site has led to results which are in the highest degree interesting and in- structive. On the slopes of the mountain are two great natural cavities, which no doubt excited the wonder and the awe of the earliest settlers. There are Hittite monuments on the summits of the hills, embedded in the later churches, which have been consecrated to the saints who succeeded the Hittite deities. The early population seem to have learnt as part of their religion to cultivate and enrich the earth, and the country, now arid and deserted, shows signs of former care, and of an irrigation service of great elaboration and completeness. Between the Hittite and the Christian age is an immense gap, still unbridged, although pottery has been found on the site belonging to the Minoan period. Probably the towns of the Persian and Greek periods are buried under the more modern remains, but the agricultural and irrigation works were kept up until the coming of the Arabs. As to the period from the fourth to the eleventh centuries we have the fullest materials. We can see how the early Christians built their churches in a semi-fortified enclosure; how gradually they gained ground till the Christian Bishop became the head of a community which must have preponderated over the lay element, and thus became the successor to the rights of the ancient Hittite priest-King. We can see too how the old worship of demigods and dead ancestors was continued in Christian times, the saints taking the place of the gods. The inhabitants, who at first lived in fortified villages on the mountains, descended into the plains, where they dwelt in an unfortified town throughout the peaceful centuries which ended in the terrible catastrophe of the Arab War. From 660 to 850 the natives were forced to abandon their ruined homes and take refuge among the hills, where they founded churches and monasteries. But the Byzantine Empire recovered its strength, and a long line of fortresses kept back the Mussulman invader, now sensibly weakened by internal strife. The fugitives returned and restored their ruined churches. A new era of prosperity succeeded, until the Seljuk conquest in 1070 involved all in an indiscriminate destruction. Now the city is ruined and the country desolate. The irrigation works are neglected, and nothing remains of the labours and civilisation of so many thousand years except the rained Christian monuments.

But these Christian monuments, as interpreted by our • The Thousand and One Churches. By Sir William Ramsay, D.C.L., and Sertrude L. Ball. London: Hodder and Stoughton. [20s. net.] authors, reveal a striking story. In the earlier centuries they show an extraordinary fertility and variety of invention which are in marked contrast to the rigid uniformity imposed after the eleventh century by the Orthodox Church. We recom- mend to the reader a close study of what may appear at first to be a dry and wearisome enumeration of architectural details, because he will learn from them on the ground of clear and undisputed evidence how Christian art took advantage of existing styles, and gradually perfected them and adopted them for its purposes. He will also be able to trace the interaction of East and West, and see how the creative idea of vault or dome, originally Asiatic, returns from the Hellenistic coast with the modifications suggested by the Greek mind. Owing to the great variety of styles repre- sented, it has been possible to trace the growth of early Christian architecture with singular clearness. It is interest- ing to note how the original ideas of the single-pillared hall and of the cross-shaped underground tomb developed into the basilica and the cross, and how the simple cross-shaped church became modified into the square church with a central dome.

The Western traveller who visits Constantinople and stands for the first time under the dome of St. Sophia feels that he has come into a new world. He feels that there is something here which be did not see in his Gothic Cathedrals, or in the Parthenon which he has just visited. And as he studies it he begins to understand that each part is subordinate to the whole, and that every detail of the building is a necessary and indispensable portion of the general structure. Wall and pillar, vault and half-dome, are each in their own way con- tributing to the maintenance and support of the dome which hangs above his head, and which is visible from the remotest corner of the building, giving splendour and unity to the whole. And he can understand the words of Paul as to the building which, "fitly framed together, groweth into a holy temple in the Lord ; in whom ye also are budded together for a habitation of God in the Spirit." The words are addressed to the despised Gentiles to remind them that they too play their part in the celestial building. And each part of it was, as we now see, derived from an Asiatic original, all trans- formed by the creative Greek spirit. St. Sophia still stands, though in alien bands. But the churches of Asia Minor are in ruins; there, as Miss Bell writes, "it is the ancient East, returned after so many millenniums of human endeavour to its natural desolation." Yet they stand, silent and ruined witnesses to the mutual services of East and West, and, we may add, to the final victory of the East:— " The West may have conquered here, organised governments and built towns laid roads and quartered legions but it was the East that conquered the conqueror. The old civilizations, coloured and elmuged the new: the primeval faiths, calling themselves by other names, continued to rule the minds of men the arts, turned to fresh uses, still drew their inspiration from an Oriental source. The East pursued its deep and silent way, assimilating what was brought to it and passing it out again marked with its own stamp."

Yes ; but still the fact remains that the West has made its contribution, and that when it receives its own back again marked with the stamp of the East, it can learn and profit.

We trust that the attention of thinkers as well as statesmen will be turned more and more to this great subject : what East and West can learn from each other, and what they have learned in the past. Certain knowledge can only be gained by such careful and patient studies of fact as are contained in this volume. And we welcome it as an important contribution to our knowledge, and a step on the right road.