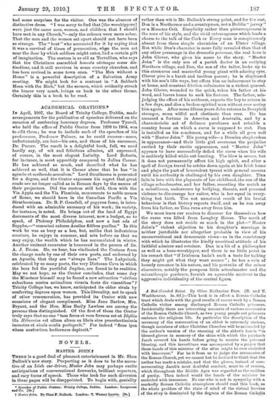 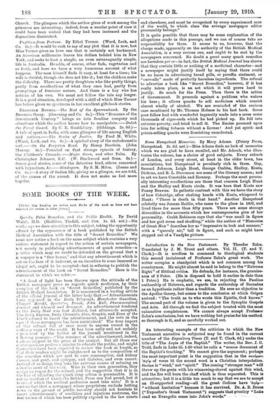 Red-Hand,ed Saint. By Olive Katharine Parr. (It. and T. Washbourne.

3s. 13d.)—This book is in effect a Roman Catholic tract which deals with the good results of rescue work by a Roman Catholic visitor among discharged Roman Catholic prisoners. Incidentally there are interesting accounts of various ceremonies of the Roman Catholic Church, as two young people not prisoners embrace the religions life. In particular the description of the ceremony of the consecration of an abbot is extremely curious, though members of other Christian Churches will be astounded by the author's version of the encasing of the abbot's hands "in blessed gloves in memory of the skins with which the patriarch Jacob covered his hands before going to receive tho paternal blessing, and this investiture was accompanied by a prayer that these hands of this minister of the altar might be ever encircled with innocence." Far be it from us to judge the ceremonies of the Roman Church, yet we cannot but be inclined to think that the author has made a mistake, and that the gloves, instead of com- memorating Jacob's most doubtful conduct, must be of ermine, which throughout the Middle Ages was regarded as the emblem of purity. Then indeed would the hands of the minister be encircled with innocence. No one who is not in sympathy with a markedly Roman Catholic atmosphere should read this book, as the whole problem of the state of mind of the virtual heroine of the story is dominated by the dogmas of the Roman Catholie

Church. The glimpses which the author gives of work among the prisoners are interesting ; indeed, from a secular point of view it could have been wished that they had been increased and the dogmatism diminished.