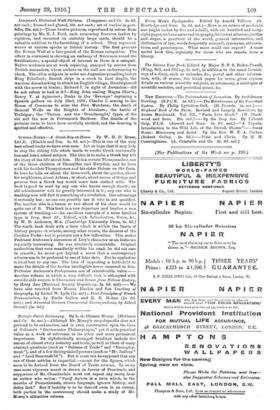 58. net.)—Although Mr. Money's encyclopaedia does not pretend to be exhaustive, and is even constructed upon the lines of Voltaire's "Dictionnaire Philosophique," yet it adds practical value as a work of reference to its other and more permanent importance. Its alphabetically arranged headings include the names of almost every industry and trade, as well as those of many abstract questions (such as "Balance of Trade" and "Unemploy- ment"), and of a few distinguished persons (such as "Mr. Balfour" and "Lord Beaconsfield"). But it must not be supposed that any one of these articles is impartial,—excent for the figures, which seem to be derived from the Board of Trade returns. In every ease some vigorous moral is drawn in favour of Free-trade, and supporters of Mr. Chamberlain must not expect any mercy from an author who writes: "Tariff Reform is a term which, in the mouths of Protectionists, abuses language, ignores history, and defies fact." But if lucidity is to be desired even in an enemy, both parties in the controversy should make a study of Mr. Money's attractive volume.