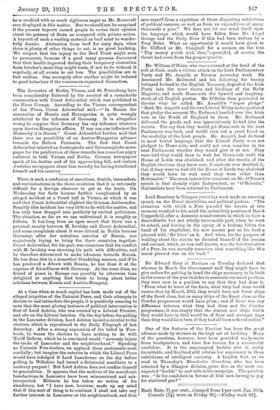 The dovecotes of Berlin, Vienna, and St. Petersburg have been

considerably fluttered by the account of a remarkable conversation with Count Aehrenthal which was published in the Novae Vrentya. According to the Vienna correspondent of the Times, Count Aehrenthal said :—" In Russia the annexation of Bosnia and Herzegovina is quite wrongly attributed to the influence of Germany. It is altogether wrong to suppose that Germany has any influence whatever upon Austro-Hungarian affairs. If any one can influence the Monarchy it is Russia." Count Aehrenthal further said that there was no possibility of an Austro-Hungarian advance towards the Balkan Peninsula. The fact that Count Aehrenthal selected an Austrophobe and Germanophobe news- paper for the publication of these remarks has caused an angry outburst in both Vienna and Berlin. German newspapers speak of his decline and of his approaching fall, and certain Austrian newspapers abuse him roundly for having humiliated himself and his country.