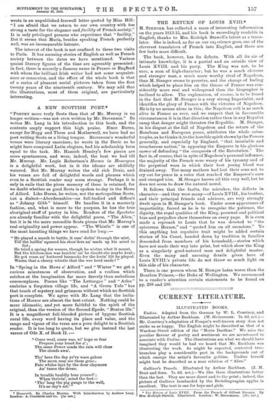 "POETRY more truly Scots than that of Mr. Murray is no longer written—was not even written by Mr. Stevenson." So

writes Mr. Lang in his introduction to this book, and the contents amply support this high praise. Since Burns, except for Hogg and Thom and Motherwell, we have had no poet writing Scots as a living tongue. Stevenson's wonderful verses were literary exercises; he wrote in the Doric as he

might have composed Latin elegiacs, had hi a scholarship been equal to the task. Mr. Hamish Hendry's few pieces are

more spontaneous, and were, indeed, the best we had till Mr. Murray. Mr. Logie Robertson's Horace in Homespun is a delightful work, but in it the idioms are skilfully watered. But Mr. Murray writes the old rich Doric, and his verses are full of delightful words and phrases which even to a Scottish reader may seem strange. Perhaps it is only in exile that the pious memory of these is retained, for we doubt whether as good Scots is spoken to-day in the Howe of Alford. Like Burns, he writes, not the metropolitan Scots, but a dialect—Aberdeenshire—as full-bodied and difficult as "Johnny Gibb " himself. He handles it in a masterly fashion, and, what is more to the purpose, he has the true aboriginal stuff of poetry in him. Readers of the Spectator are already familiar with the delightful poem, "The Alien," but it is in the more recondite Scots pieces that Mr. Murray's real originality and power appear. "The Whistle" is one of the most haunting things we have read for long :— " He played a march to battle, it cam' dirlin' through the mist, Till the halflin' squared his shou'ders an' made up his mind to list; He tried a spring for wooers, though he wistna what it meant, But the kitchen-lass was lauchin' an' he thocht she maybe kent ; He got ream an' buttered bannocks for the lovin' lilt he played. Wasna that a cheery whistle that the wee herd made ?"

In "Spring in the Howe o' Alford" and "Winter " we get a curious minuteness of observation, and a realism which catches at the imagination far more fiercely than melodious commonplaces. Poems like "The Lettergae " and " Arles " enshrine a forgotten Tillage life, and "A Green Yule" has that touch of mystery and grimness without which no Scottish poet is complete. We agree with Mr. Lang that the imita- tions of Horace are almost the best extant. Nothing could be more idiomatic, and yet more faithful to the spirit of the original, than the version of the Second Epode, " Beatus ille." It is a magnificent full-blooded picture of bygone Scottish rural life, every word having its place and value, and the range and vigour of the verse are a pure delight to a Scottish reader. It is too long to quote, but we give instead the last verses of Ode X. of Book H. :— "Come weal, come wae, wi' hope or fear Prepare your heart for a' ; The same Power sends the rain will clear The clouds awa'.

Tho' here the day ye've waes galore The morn may see them gone ; Fate whiles lays by the dour claymore An' tunes the drone.

• Harnewith. By Charles Murray. With Introduction by Andrew Lang. London: A. Constable and Co. 15s. net.)