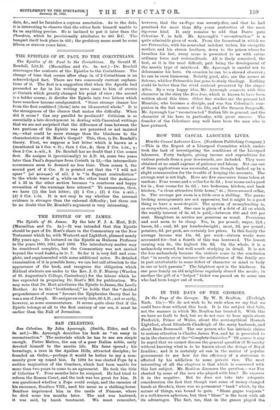 Ran Celestine. By John Ayscough. (Smith, Elder, and Co. 6s. net.)—Mr. Ayscough describes his book as "an essay in reconstruction." The materials which he has to use are simple enough. Pietro Matte°, the .s eta -poor Italian noble, early devoted himself to the ascetic life. His fame spread ; his hermitage, a cave in the Apulian Hills, attracted disciples ; he founded an Order,—perhaps it would be better to say a com- munity grew up round him. In 1294 he was elected Pope by a sudden inspiration of the Conclave, which had been unable for more than two years to come to an agreement. He took the title of Celestine V. Four months later he resigned. He had tried to reform the Roman Court, and the task was too great for him. It was questioned whether a Pope could resign, and the enemies of his successor, Boniface VIII., used his name as a stalking-horse. Boniface imprisoned him in the castle of Fumone, where he died some ten months later. The end was hastened, it was said, by harsh treatment. We must remember, however, that the ex-Pope was seventy-five, and that he had practised for more than fifty years austerities of the most rigorous kind. It only remains to add that Dante puts Celestine V. in hell. Mr. Ayscough's "reconstruction" is a quite admirable piece of work. From the farmstead in which we see Petrucchio, with his somewhat indolent father, his energetic mother, and his eleven brothers, down to the prison where he breathes his last, every scene is presented to 1113 with extra- ordinary force and verisimilitude. All is finely conceived, the best, as it is the most difficult, part being the development of the ascetic type of sainthood. Mr. Ayscough is careful not to dehumanise his hero. On occasion he can be a shrewd observer ; he can be even humorous. Notably, good, also, are the scenes at Salerno, whither Petrucchio has gone to study theology. Nothing could be better than the vivid contrast presented by the singer Alfeo. By a very happy idea, Mr. Ayscough connects with this character in the story the Dies Irae, which is known to have been written about this time. Other fine studies are the peasant lad Maurizio, who becomes a disciple, and was San Celestine's com- panion in the last scenes of his life, and the Saracen Dragoudh. Mr. Ayscough has " reconstructed " Italian life in general, and the character of his hero in particular, with great success. The founder of the Celestines may well have been the man who is here pictured.