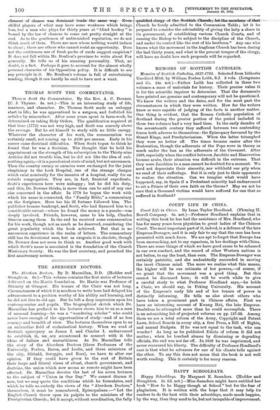 Thomas Scott the Commentator. By the Rev. A. C. Downer. (C. J. Thynne. 38. net.)—This is an interesting study of life, manners, and character. Dr. Thomas Scott made an unhappy start in life; he was apprenticed to a surgeon, and forfeited his articles by misconduct. After some years spent in farm-work, he determined on taking Holy Orders. The qualification required at that time (1772) was not very high, and Scott was scarcely above the average. But he set himself to study with no little energy. Whatever the character of his work, the remuneration was certainly small, not coming up to £100 per annum. Early in his career came doctrinal difficulties. When Scott began to think he found that he was a Socinian. The thought that he held his appointment on the strength of his subscription to the Thirty-nine Articles did not trouble him, but he did not like the idea of sub- scribing again,—it is a paradoxical state of mind, but not uncommon. Then the country curacy or curacies were exchanged for the joint chaplaincy to the Lock Hospital, one of the strange charges which exist nominally for the inmates of a hospital, really for an outside congregation. They are, in fact, financial expedients. Scott's experiences here were unhappy ; but he did his duty, and this, Dr. Downer thinks, is more than can be said of any one else concerned in the affair. In 1778 he began the work with which his name is connected, the "Family Bible," a commentary on the Scripture. Here too his ill fortune followed him. The publisher became bankrupt, and Scott, who had financed him to a considerable extent—where he found the money is a puzzle—was deeply involved. Friends, however, came to his help, Charles Simeon among them. In the end he received some remuneration for his work, though not as much as he deserved, considering the great popularity which the book achieved. But that is no uncommon experience in the realm of letters. The commentary still has its devotional uses, but as exegesis it is obsolete, though Dr. Downer does not seem to think so. Another good work with which Scott's name is associated is the foundation of the Church Missionary Society. He was the first secretary, and preached the first anniversary sermon.