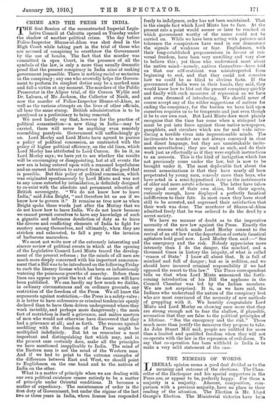 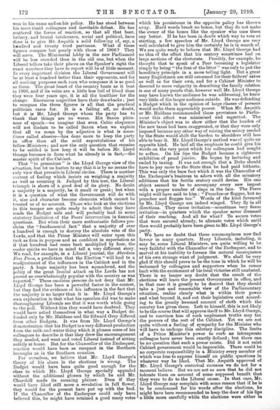 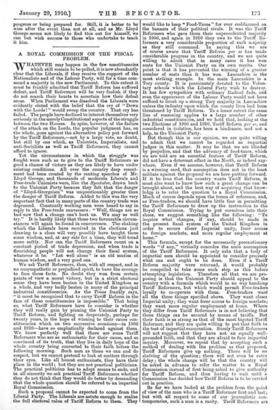 THE NEMESIS OF WORDS.

IBERAL opinion seems a good deal divided as to the J meaning and outcome of the elections. The Chan- cellor of the Exchequer and his special supporters in the Press are, or appear to be, perfectly happy. For them a majority is a majority. Afnount, composition, com- parison with a previous majority, have no place in their reading of the situation. The Election is Mr. Lloyd George's Election. The Ministerial victories have bean won in his name and on his policy. He has stood between his more timid colleagues and inevitable defeat. He has scattered the forces of reaction, so that all that beer, bribery, and brutal intolerance, social and political, have done is to give Mr. Asquith a solid following of, say, a handred and twenty tried partisans. What if these figures compare but poorly with those of 1906? They will serve. The Ministerial lobby in the new Parliament will be less crowded than in the old one, but when the Liberal tellers take their places on the Speaker's right the exact numbers they have to report will be of little moment. In every important division the Liberal Government will be at least a hundred better than their opponents, and for all working purposes each man who composes it is as good as three. The great heart of the country beats as it beat in 1906, and if its veins are a little less full of blood than they were four years ago, it is all the healthier for the change. Enormous majorities have their drawbacks ; just to compass the three figures is all that the practical politician cares for. It is a falling off, no doubt, but it is Mr. Lloyd George whom the party has to thank that things are no worse. His Saxon plain- ness of speech—we imagine that even Celtic eloquence will not disdain to be called Saxon when we explain that all we mean by the adjective is what is some- times called abusive—has done more to keep the party in office than all the mild expostulations of his fellow-Ministers ; and now the only question that remains to be settled is how long it will be before Mr. Lloyd George becomes in form what he already is in fact,—the master spirit of the Cabinet.

That "in pemmican" is the Lloyd George view of the situation, but let us hasten to say that it is by no means the only view that prevails in Liberal circles. There is another current of feeling which insists on weighing a majority as well as counting it. Judged by this test, the Liberal triumph is shorn of a good deal of its glory. No doubt a majority is a majority, be it small or great; but when it is a question of what the Government will do with it, size and character become elements which cannot be treated as of no account. Those who look at the elections in this temper are quite ready to admit that they have made the Budget safe and will probably lead to some statutory limitation of the Peers' intervention in financial questions. But when their more enthusiastic fellows pro- claim the "fundamental fact" that a majority of over a hundred is enough to destroy the absolute veto of the Lords, and that the Prime Minister will enter upon this task as firm in purpose and as confident in expectation as if that hundred had come back multiplied by four, the cooler spirits we have in mind tell a very different story. We read, for example, in a Liberal journal, the Aberdeen Free Press, a prediction that the Election "will lead to a readjustment of the influences in the Cabinet and in the party. A huge majority has been squandered, and the policy of the great frontal attack on the Lords has not proved so overwhelmingly popular with the country as was expected." These cautious persons do not deny that Mr. Lloyd George has been a powerful factor in the contest, but they find the evidence of his influence in the fact that the majority is no larger than it is. Mr. Lloyd George's own explanation is that what his speeches did was to make thoroughgoing Liberals see that it was worth while going to the poll. Without him they would have doubted. They would have asked themselves in what way a Budget de- fended only by Mr. Haldane and Sir Edward Grey differed from other Budgets. It was from Mr. Lloyd George's demonstration that his Budget is a very different production from the milk-and-water thing which it pleases some of his colleagues to describe it that they drew the encouragement they needed, and went and voted Liberal instead of sitting sulkily at home. But for the Chancellor of the Exchequer, reaction would have been as rampant in the Northern boroughs as in the Southern counties. For ourselves, we believe that Mr. Lloyd George's theory of his share in the elections is wrong. The Budget would have been quite good enough for the class to which Mr. Lloyd George specially appealed without the additional glosses by which he and Mr. Churchill made its meaning plainer. Even if they would have liked still mom a revolution in full flower, they would for the present have put up with the bud. If the Chancellor of the Exchequer could only have believed this, he might have retained a good many votes which his persistence in the opposite policy has thrown away. Hard words break no bones, but they do not Make the owner of the bones like the speaker who uses them any better. If he has been in doubt which way to vote at starting, a few speeches of Mr. Lloyd George are very well calculated to give him the certainty he is in search of. We are quite ready to believe that Mr. Lloyd George had no idea of the effect that his oratory sometimes had on large sections of the electorate. Possibly, for example, he thought that to speak of a Peer becoming a legislator simply by being "the first of the litter" was only to put the hereditary principle in a more telling light. But a great many Englishmen are still esteemed for their fathers' sakes as well as for their own, and for a Cabinet Minister to descend to mere vulgarity in describing the family relation is one of many proofs that, however well Mr. Lloyd George may have known the audience he was addressing, he knew very little of the larger audience outside. He was defending a Budget which in the opinion of large classes of persons would make them appreciably poorer. When Mr. Asquith or Mr. Haldane recommended these provisions to Parlia- ment this effect was minimised and regretted. The Minister's object was to show either that the burden of the new taxes had been exaggerated, or that they were only imposed because any other way of raising the money needed by the State would shift the burden to shoulders still less able to bear it. Mr. Lloyd George's method was of quite an opposite kind. He laid all the emphasis he could give his words on the very point which his colleagues had sought to soften. On his lips the Budget became a righteous exhibition of penal justice. He began by lecturing and ended by taxing. It was not enough that a Duke should have to pay more to the State than he had paid hitherto. This was only the bare fact which it was the Chancellor of the Exchequer's business to adorn with all the minatory additions that his fertile oratory could devise. His one object seemed to be to accompany every new impost with a proper number of slaps in the face. The Peers might well have said to him • " Prea,chee or floggee, but no preachee and floggee too." Words of the kind favoured by Mr. Lloyd George are indeed winged. They fly in all directions. They cause irritation—sometimes very fierce irritation—in quarters which the speaker never dreamed of their reaching. And all for what? To secure votes that were secured already, to alienate votes which until then would probably have been given to Mr. Lloyd George's Party.

We have no doubt that these commonplaces now find favour in many quarters. Many Liberals, including, it may be, some Liberal Ministers, are quite willing to be very faithful with the Chancellor of the Exchequer, and to marvel at his inability to foresee the natural consequence of his own strange want of judgment. We shall be very glad if this should prove to be the tone in which he will be welcomed by colleagues and supporters when he comes back with the excitement of his local victories still unabated. There is no longer any doubt that the result of the elections will leave the present Government in office, and in that case it is greatly to be desired that they should take a just and reasonable view of the Parliamentary situation, realise clearly what is within their power and what beyond it, and cut their legislative coat accord- ing to the greatly lessened amount of cloth which the country has given them. Left to himself, this is not likely to be the course that will approve itself to Mr. Lloyd George, and to convince him of such unpleasant truths may tax the powers of the rest of the Cabinet. Yet we are not quite without a feeling of sympathy for the Minister who will have to undergo this salutary discipline. The limits of a Prime Minister's power to man intemperate colleague have never been exactly defined ; but them can be no question that such a power exists. Did it not exist Cabinet government would be impossible. There could be no corporate responsibility in a Ministry every member of which was free to express himself on public questions in whatever way he liked. That Mr. Asquith approved of Mr. Lloyd George's oratorical excesses we do not for a moment believe. But we are not so sure that he did not tolerate them on account of some supposed benefit that they were to do to the Liberal cause. In that case, Mr. Lloyd George may complain with some reason that if he is to be condemned for his words after the elections, he might have been recommended to keep the door of his lips a, little more carefully while the elections were either m • progress or being prepared for. Still, it is better to be wise after the event than not at all, and as Mr. Lloyd George seems not likely to find this out for himself, we can but wish success to those who undertake to teach it him.