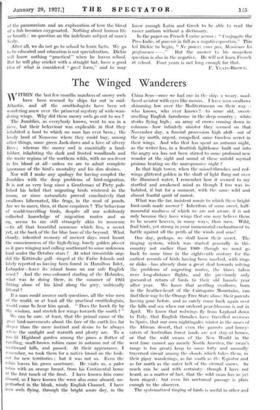 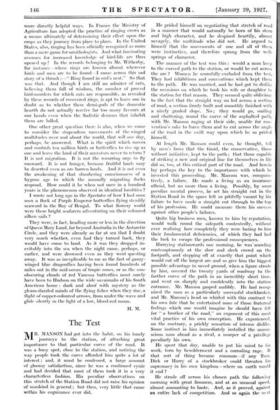 WITHIN the last few months numbers of snowy owls have been rescued by ships far out in mid- Atlantic, and all the ornithologists have been set wondering anew over the primeval mystery of wide-wan- dering wings. Why did these snowy owls go out to sea ?

The Jumblies, as everybody knows, went to sea in a sieve, but their behaviour was explicable in that they inhabited a land to which no man has ever been ; the lovely land of Nonsense where they could buy, among other things., some green Jack-claws and a hive of silvery Bees ; whereas the snowy owl is essentially a land- lubber, inhabiting the dark and frosted woodlands and the waste regions of the northern wilds, with no sea-fever in his blood at all—unless we are to admit complete ignorance of the bird's mentality and his dim desires. • Nor will I make any apology for having coupled the Jumblies . with the deep problems of bird-migration.

It is not so very long since a Gentleman of Piety pub- lished his belief that migrating birds wintered in the moon, or since naturalists proved conclusively that swallows hibernated, like frogs, in the mud Of ponds: Are we to sneer, then, at these enquirers ? The behaviour of world-travelling birds, despite all our sedulously collected knowledge of migration routes and so on, seems to me still strangely akin to nonsense —to all that beautiful nonsense which lies, a secret yet, at the back of the far bhie haze of the beyond. What cloudy, inherited memory of ancient days must haunt the consciousness of the high-flying, lonely golden plover as it goes winging and calling southward to some unknown land under the October stars ? At what irresistible urge did the KittiWake gull—ringed at the Faille Islands and lately reported as having been found in Hamilton Inlet, Labrador—leave its island home on our safe English coast? And the rose:coloured starling of the Hebrides, what was he doing there, in the summer of 1925 flitting alone of his kind along the grey, unfriendly littoral ?

If a man could answer such questions, all the wise men of the world, or at least all the practical ornithologists, would come 'to hear him speak. " Does the hawk fly by thy wisdom, and stretch her wings towards the south ? " We can be sure, at least, that the primal cause of the great bird-movements about the face of the earth lies far deeper than the mere instinct and desire to be always where the sunlight and warmth and plenty are. To a rose-lit Highland garden among the pines a flutter of carolling-, snuff-brown robins came in autumn out of the southward hills, and passed. At their appearance, I remember, we took them for a native brood on the look- out for new territories ; but it was not so. Even the robin leaves his green sanctuary." He visits us, a paler robin with an orange breast, from his Continental home at the first touch of the frost. I have known him come aboard, as I have known the-wren also come aboard, un- Perturbed in the bleak, windy English Channel. I have seen owls flying, through the bright azure day, in the China Seas—once we had one in the ship, a weary, mad- faced aviator with eyes like moons. I have seen swallows skimming low over the Mediterranean on their way— who knows, who ever knows ?—to some old, sweet- smelling English farmhouse in the deep country ; white storks flying high ; an army of crows coming down in columns—how infinitely sinister they seemed on that November day, a funeral procession high aloft—out of the icy north, urgent, compelled, sonic timeless secret in their wings. And who that has spent an autumn night, as the writer has, in a Scottish lighthouse built out into the angry sea has not been stirred to some profound new wonder at the sight and sound of these untold myriad pinions beating on the unresponsive night. ?

In that high tower, when the missel-thrushes and red- wings glittered golden in the shaft of light flung out over the illumined water, I remember how it seemed to my startled and awakened mind as though I too was in- habited, if but for a moment, with the same wild and almost fearful spirit of unrest.

What was the far, insistent music to which these bright bird-souls made answer ? Inheritors of some sweet, half- mournful madness of which we arc not aware, it is not only because they have wings that one may believe them to be nearer heaven, in many ways, _than men. Wild, frail birds, yet strong in your immemorial enchantment to battle against all the perils of the winds and seas!

One day, perhaps, we shall know their secret. The ringing system, which was started generally in this country not earlier than 1909—though we must go back to some time iii the 'eighteenth century for the earliest records of birds having been marked, with rings or disks—has already done a great deal towards solving the problems of migrating routes, the times taken over long-distance flights, - and the previously only guessed-at return of birds to their old haunts year after year. We know that nestling swalloivs, born in the heather-heart of the Cairngorm Mountains, can find their way to the Orange Free State alone, their parents having gone before, and as surely come back again over the hills and sea when our orchard pear-blossom is out in April. We know that redwings fly from Lapland down to Italy, that English thrushes have travelled overseas to Spain, that our own nightingales winter in the oases of the African desert, that even the parrots and honey- eaters of Australian forest lands are not stay-at-homes, or that the wild swans of the New World in the west (one cannot say merely North America, the swan's range is too great) keep to sonic lofty and annually traversed circuit -among the clouds which takes them, in their gipsy wanderings, as far south as the Equator and as far north as the outer belt of the eternal snows. So much can be said with certainty—though I have not heard, as a matter of fact, that the wild swan has as yet been ringed : but even his nocturnal passage is plain enough to the observer.

The systematized ringing of birds is useful in other and more directly helpful ways. In France the Ministry of Agriculture has adopted the practice of ringing crows as a means ultimately of determining their effect upon the crops as they journey from place to place. In the United States, also, ringing has been officially recognized as more than a mere game for ornithologists. And what fascinating avenues for increased knowledge of bird-life are thus opened up ! In the records belonging to Mr. Witherby, for instance—whose rings are known almost wherever birds and men arc to be found—I came across this sad story of a thrush :—" Ring found in owl's nest." So that was that. And though I am still an admirer of cats, believing them full of wisdom, the number of proved bird-murders for which cats are responsible, as revealed by these records of recovered rings, is apt to leave one in doubt as to whether these demi-gods of the domestic hearth do not actually receive far too many favours at our hands even when the Sadistic demons that inhabit them are lulled.

One other great question there is also, when we come to consider the stupendous movements of the winged multitudes over and about the world, that will one day, perhaps, be answered. What is the spirit which moves and controls ten million birds or butterflies to rise up as one and leave the land of their ancestors never to return ? It is not migration. It is not the recurring urge to fly sunward. It is not hunger, because fruitful lands may be deserted even as are barren lands. And it is not even the awakening of that slumbering consciousness of a bygone age to which the annually migrating flocks respond. How could it be when not once in a hundred years is the phenomenon observed in identical localities ?

I wrote not long ago in the Spectator of how I had once seen a flock of Purple Emperor butterflies flying steadily seaward in the Bay of Bengal. To what flowery world were these bright seafarers adventuring on their coloured silken sails ?

They were, in fact, heading more or less in the direction of Queen Mary Land, far beyond Australia in the Antarctic Circle, and they were already so far at sea that I doubt very much whether, even had they turned back, they would have come to land. As it was they dropped in- evitably into the sea when the night came, perhaps, or earlier, and were drowned even• as they went questing away. It was as inexplicable to me as the fact of gauzy- winged blue dragonflies having been found hundreds of miles out in the mid-ocean of tropic zones, or as the sun- obscuring clouds of red Vanessa butterflies must surely have been to Hudson on the wide savannahs of his South American home : dark and aloof with mystery as the gleam-dazzled minds of the flying fishes when they rise, a flight of copper-coloured arrows, from under the wave and glide silently in the light of a low, blood-red moon.