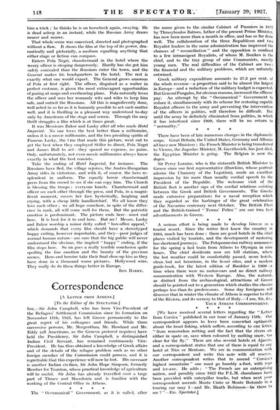 [A LETTER FROM ATHENS.] [To the Editor of the SPECTATOR.] Sias----Sir John Campbell, who has been Vice-President of the Refugees' Settlement Commission since its formation on November 11th, 1923, has left Greece permanently to the great regret of his colleagues and friends. While three successive persons, Mr. Morgenthau, Mr. Howland and Mr. Eddy (all Americans, as the Geneva protocol requires) have held the Presidency, Sir John Campbell, a distinguished Indian Civil Servant, has remained continuously Vice- President. He has thus obtained a knowledge of Greek affairs_ and of the details of the refugee problem such as no other foreign member of the Commission could possess, and it is regrettable that this experience will now be lost. His successor- is another Indian civilian; Sir John Hope Simpson,- formerly Member for Taunton, whose practical-knowledge of agriculture will be useful. Sir John has already travelled over a large part of Thrace and Macedonia and is familiar with the working of the Central Office in Athens.

* * * The Oecumenical " Government, as it is called, after the name given to the similar Cabinet of Premiers in 1877 by Thrasyboulos Zaimes, father of the present Prime Minister, has now been more than a month in office, and has so far done well. The collaboration of the three Republican and two Royalist leaders in the same administration has improved the chances of " reconciliation " and the opposition is confined to a few intransigent Royalists, of whom M. Bozikes is the chief, and to the tiny group of nine Communists, mostly young men. The real difficulties of the Cabinet are two : the financial and the military problems, which are naturally entwined.

Greek military expenditure amounts to 27.3 per cent. of the whole revenue—a proportion said to be almost the largest in Europe—and a reduction of the military budget is expected. But General Pangalos, for obvious reasons, increased the officers' pay. An attempt by the " Oecumenical " Government to reduce it, simultaneously with its scheme for restoring capable Royalist officers to the army and preventing the intervention of the officers in politics, will therefore be difficult. But until the army be definitely eliminated from politics, in which it has interfered since 1909, there will be no return to " normality." * There have been of late numerous changes in the diplomatic corps. Great Britain, the United States, Germany and Albania all have new Ministers ; the French Minister is being transferred to Vienna, the Jugoslav Minister, M. Gavrilovich, has just died, the Egyptian Minister is going. The Belgian is now the doyen.

Sir Percy Loraine, who is the sixteenth British Minister to Greece since our first representative (Dawkins, whose portrait adorns the Chancery of the Legation), made an excellent impression by his more than usually cordial speech to the President of the Republic. The welcome visit of the British fleet is another sign of the cordial relations existing between the Greek and British Governments. The Greeks made extensive preparations for a naval reception which they regarded as the harbinger of the great celebration of the Navarino centenary next October. The British Fleet and the British-trained " Towns' Police " are our two best advertisements in Greece.

A serious effort is being made to develop Greece as a tourist resort. Since the writer first knew the country in 1894, much has been done : there are good hotels in the chief places visited by tourists, and the development of motoring has shortened journeys. The Peloponnesian railway announces for the spring a fast train from Athens to Olympia in nine hours. The chief desiderata now are hill stations, where the hot weather could be comfortably passed, more hotels, clean. but not luxurious, in the lesser sites, and a modern guide-book, for the latest edition of Baedeker is 1909—a time when there were no motor-cars and no direct railway communication with Western Europe. Also, the natural, as distinct from the archaeological, attractions of Greece should be pointed out to a generation which studies the classics perhaps less than its predecessors. Some day foreigners will discover that in winter the climate of Athens is superior to that of the Riviera, and its scenery to that of Italy.—I am, Sir, &c.,

[We have received several letters regarding the " Letter from Corsica " published in our issue of January 15th. Our correspondent appears to have been somewhat optimistic about the trout fishing, which suffers, according to one letter, " from remorseless netting and the fact that the rivers arc either -in spate or, save when coloured by melting snow, too

clear for the fly." There are also several hotels at Ajaccio; and a correspondent states that one of these is equil to any

hotel at Nice or Mentone. We are in communication with our correspondent and write this note with all reserve. Another correspondent writes that to ascend ".Corsica's

highest mountains " one must go humbly a-foot, with rope and ice-axe. He adds : The French are an enterprising nation, and possibly since 1925 the P.L.M. charabnes have been provided with caterpillar tracks, but when next your co' rrespondent ascends Monte Cinto or Monte Rotondo in touring ear may I—and Mr. Heath Robinson—be there to see ? "—En. S'pectafor.1