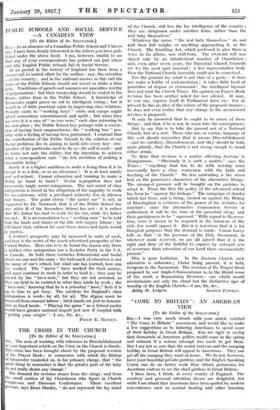 THE CRISIS IN THE CHURCH [To the Editor of the

SPECTATOR.] Silt,—The note of warning with reference to Disestablishment in your important article on the Crisis in the Church is timely. This crisis has been brought about by the proposed revision of the Prayer Book ; in connexion with which the Bishop of Gloucester reminded us, in his primary charge, that " the great thing to remember is that the greater part of the laity do not really desire any change." The demand for revision comes from the clergy, and from the small section of lay Churchmen who figure in Church Congresses and Diocesan Conferences. These excellent Persons, says Dean Stanley, " do not represent the lay mind

of the Church, still less the lay intelligence of the country : they are clergymen under another form, rather than the real laity themselves."

Whatever the cause, ", the real laity themselves " do not pull their full weight, or anything approaching it, in the Church. The Enabling Act, which professed to give them a voice in its affairs, was still-born. The thetoral roll was signed only by an infinitesimal number of Churchmen ; and, even after seven years, the Parochial Church Councils are for the most part nominal ; a less representative body than the National Church Assembly could not be conceived.

For the genuine lay mind is not that of a party ; it does not make a hobby of ecclesiasticism ; it takes little heed of punctilios of dogma or ceremonial ; the intelligent layman does not read the Church Times. His opinion on Prayer Book revision has been neither asked for nor offered. It may, as you say, express itself in Parliament later on ; but at present he has no idea of the nature of the proposed changes he does not even realize that any change in the accustomed services is proposed.

It may be answered that he ought to be aware of these things ; and that, if he is not, he must take the consequences.

But to say this is to take the ground not of a National Church, but of a sect. Those who use, or excuse, language of this sort should remember that it means Disestablishment —and its corollary, Disendowment, and they should be told, quite plainly, that the Church is not strong enough to stand either strain.

To deny that revision is a matter affecting doctrine is disingenuous. " Obviously it is such a matter," says the Times ; " anything that has to do with worship must necessarily have a close connexion with the faith and teaching of the Church." No less misleading is the stress laid on the permissive characters of the alternative liturgy. The strongest pressure will be brought on the parishes to adopt it. From the first the policy of the advanced school has been to " squeeze the bishops." The campaign of slander which has been, and is being, carried on against the Bishop of Birmingham is evidence of the power of the sectaries fur mischief ; once the alternative Communion Service is authorized, it will be the turn of the parochial clergy and their parishioners to be " squeezed." With regard to Reserva- tion, were it shown to be required in the interests of the sick, few would oppose it. But it is notorious that it is for liturgical purposes that the demand is made. Canon Lacey . tells us that " in the presence of the Holy Sacrament, in whatever mode reserved, we are all agreed that it is the right and duty of the faithful to express by outward acts of reverence their adoration of our Lord there sacramentally present."

This is pure Latinism. In the Eastern Church such adoration is unknown ; Christ being present, it is held, incognito in the Sacrament. The revision of the Prayer Book proposed by our Anglo-Ultramontanes is, in the literal sense of the word, a Romanizing Revision ; one which would revolutionize not only the ritual but the distinctive type of worship of the English Church.—I am, Sir, &c.,