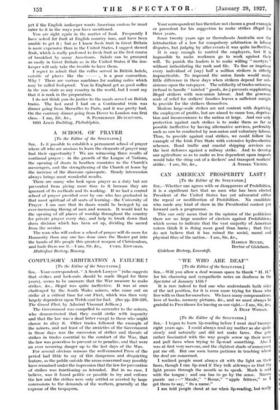 Sin,---Your correspondent, " A Scotch Lawyer " (who suggests that strikes and lock-outs should be made illegal for three years), seems to be unaware that the War measure to make strikes, &e., illegal was quite ineffective. It was at once challenged by the South Wales miners, who came out on strike at a critical time for our Fleet, which was then very largely dependent upon Welsh coal for fuel. (See pp. 230-236, The Grand Fleet, by Admiral 'Viscount Jellicoe.) The Government was compelled to surrender to the miners, who demonstrated that they could strike with impunity and that the law was'a dead letter except to those who might choose to obey it. Other trades followed the example of the miners, and not least of the anxieties of the Government in those days was the succession of strikes and threats of strikes in trades essential to the conduct of the War, that the law was powerless to prevent or to penalize, and that were an ever recurring danger up to the last days of the War.

For several obvious reasons the well-censored Press of the period had little to say of this dangerous and disquieting feature, so the public outside the areas concerned may possibly have remained under the impression that the law for prevention of strikes was functioning as intended. But in no case, I believe, was it found politic or possible to try and enforce the law and the strikes were only settled or averted by large concessions to the demands of the workers, generally at the expense of the taxpayers.

Your correspondent has therefore not chosen a good example or precedent for his suggestion to make strikes illegal fur three years.

Some twenty years ago or thereabouts Australia saw the introduction of a law for compulsory arbitration in labour disputes, but judging by after events it was quite ineffective.

It is easy enough to control the employers, but it is impossible to make workmen go to work against their will. To punish the leaders is to make willing " martyrs'? without intimidating the rank and file. To fine or imprison every individual of (say) half a million strikers is utterly impracticable. To impound the union funds would make little difference in these days when strikers depend for sub- sistence upon the ratepayer. The solidarity of trades unionism (refusal to handle " tainted " goods, &c.) prevents supplanting illegal strikers with non-union labour. And the generous scale of relief for strikers' families leaves a sufficient margin to provide for the strikers themselves.

Modern large-scale strikes are not content with depriving the employers of profits, but are aimed to cause loss, depriva- tion and inconvenience to the nation at large. And our only protection against such strikes is to make them as far as possible ineffective by having alternative services, preferably such as can be conducted by non-union and voluntary labour. Thus, to provide against coal strikes, we could follow the example of the Irish Free State with extensive hydro-electrie schemes. Road traffic and coastal shipping services are the best defences against a railway strike. And to develop our agriculture so as to make us less dependent upon imports would take the sting out of a dockers' and transport workers'