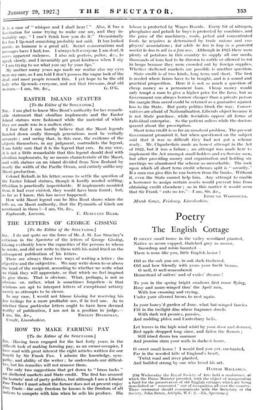 THE LETTERS OF GEORGE GISSING

[To the Editor of the SPECTATOR.] Sin, --I do not quite see the force of Mr. J. St. Loc Strachey's criticism in the Spectator of the letters of George Gissing. Gissing evidently knew the capacities of the persons to whom he wrote, and did not write to them with his mind fixed on the subsequent publication of his letters.

There are always these two ways of writing a letter : the objective and the subjective. We may write down to or above the head of the recipient, according to whether we write what we think they will appreciate, or that which we feel inspired to give them. That is obvious. What, perhaps, is not so obvious—or, rather, what is sometimes forgotten—is that relations are apt to interpret letters of exceptional artistry merely as attempts to be clever.

In any ease, I. would not blame Gissing for reserving his fine feelings for a more profitable use, if he had. one. As to whether these particular letters ought to have been deemed worthy of publication, I am not in a position to judge.—