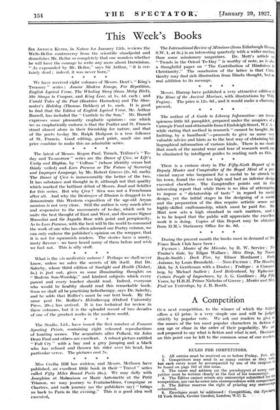 There is a curious story in The Fifty-Sixth Report of

the Deputy Master and Comptroller of the Royal Mint of a pro. vincial mayor who bargained for a medal to be struck for his town, found the cost too high and had an inferior design executed elsewhere. The Comptroller points out in thin interesting report that while there is no idea of attempting to impose a " dictatorship of taste " in regard to medri design, yet the initial stages in the designing of a medal and the preparation of the dies require artistic sense and highly-skilled craftsmanship, which must be paid for. The Mint now sets a high standard in such matters, and it is to be hoped that the public will appreciate the excellent work it is doing. Copies of this Report may be obtained from 11.111.'s Stationery Office for Os. lid. --