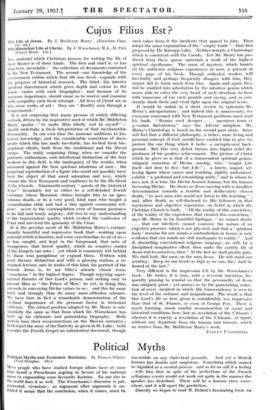 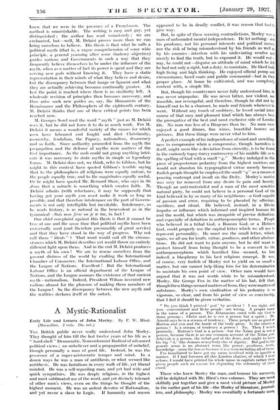 MOST people who have studied foreign affairs have at some time heard -a Frenchman arguing in faVour of . his national cause or- expounding some .favourite doctrine. No one else in the world does it so well. The Frenchman's discourse is pat, :connected, vivacious ; as- argument after argument is un- folded it seems that the cone- liieign,-whert it conies, must be

irresistible on any dialectical grounds. And yet a British listener has doubts and suspicions. Something which cannot be dignified as a mental proces.s--and so let us call it a feeling —tells him that in spite of the perfections of the French syllogisms events would not work out quite in the manner the speaker has described. There will be a human error some- where, and it will upset the, prediction.

Directly we began to read M. Delaisi's fascinating book we knew that we were in the presence of a Frenchman. The method is unmistakable. The writing is easy and gay, yet distinguished ; the author has read voraciously ; we are enchanted, but—well, M. Delaisi proves more than we can bring ourselves to believe. His thesis is that what he calls a political myth (that is, a vague comprehension of some wide principle, a general yearning after some shadowy objective) guides nations and Governments in such a way that they frequently believe themselves to be under the influence of the myth, when as a matter of fact its power is spent and they are serving new gods without knowing it. They have a static representation in their minds of what they believe and desire, but the discrepancy between that image or figment and what they are actually achieving becomes continually greater. At last the point is reached where there is no similarity left. A wholesale revision of principles then becomes necessary, and thus arise such new guides as, say, the Humanists of the Renaissance and the Philosophers of the eighteenth century. M. Delaisi thinks that one of these critical points has been reached now.

M. Georges Sorel used the word " myth " just as M. Delaisi uses it, but he did not force it to do so much work. For M. Delaisi it means a wonderful variety of the causes for which men have laboured and fought and died—Christianity, monarchy, feudalism, the Papacy, nationalism, democracy and so forth. Since authority proceeded from the myth the propagation and the defence of myths were matters of the first importance. As the mob could not grasp anything intri- cate it was necessary to state myths in simple or legendary forms. M. Delaisi does not, we think, refer to Gibbon, but-he might in this context have quoted Gibbon's terrible saying that to the philosophers all religions were equally untrue, to the people equally true, and to the magistrates equally useful. Or he might have quoted Mr. Bernard Shaw, who says in SI. Joan that a miracle is something which creates faith. M. Delaisi admits (with reluctance, it may be supposed) that having got your myth you must make it work as long as possible, and that therefore intolerance on the part of Govern- ments is not only intelligible but inevitable. Intolerance, as he reads history, is as natural in the benevolent as in the tyrannical--Soil mon frere ore jc le tae, in fact !

Our chief complaint against this thesis is that it cannot be true at one and the same time that political myths have been universally used (and therefore presumably of great service) and that they have stood in the way of progress. Why not call them " ideals " ? That word would suit all the circum- stances which M. Delaisi describes yet would throw an entirely different light upon them. And in the end M. Delaisi produces a myth of his own ! We arc to rescue ourselves from the present distress of the world by exalting the International Chamber of Commerce, the International Labour Office, and the League of Nations. Excellent ! But the International Labour Office is an official department of the League of Nations, and the League assumes the existence of that ancient myth—nationalism. Indeed, President Wilson invented new nations almost for the pleasure of making them members of the League! So the discrepancy between the new myth and the realities declares itself at the outset.