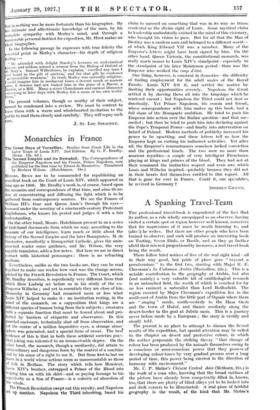 Page 21, 29 January 1927 — Monarchies in France he Great Days of Versailles. Studies from
Close

Monarchies in France he Great Days of Versailles. Studies from

Court Life in the Later Years of Louis XIV. 2nd Edition. By 0. F. Bradby. (Bonn. 12s. 6d.) he Second Empire and its Downfall. The Correspondence of the Emperor Napoleon and his Cousin, Prince Napoleon, now published for the first time by Ernest de Hauterive. Translated by Herbert Wilson. (Hutchinson. 18s.) SSRS. BENN are to be commended for republishing an xeellent book on the Court of Louis XIV, which appeared so ong ago as 1906. Mr. Bradby's work is, of course, based upon le memoirs and correspondence of that time, and aims there- ore at concentrating and diffusing the light which is to be thered from contemporary sources. We see the France of illiam III's time and Queen Anne's through his eyes- ocussed under the scrutiny of a nineteenth-century Protestant ' glishman, who knows his period and judges it with a fair ndcrstanding.

On the other hand, Messrs. Hutchinson present to us a series I first-hand documents from which we may, according to the easure of our intelligence, learn much or little about the astory of the Second Empire and the later Bonapartes. M. de Iauterive, manifestly a Bonapartist Catholic, gives the unin- tructed reader some guidance, and Mr. Wilson, the very apable translator, adds a few notes. But here we are in direct ..mtact with historical personages : there is no refracting indium.

Nevertheless, unlike as the two books are, they can be read ;ether to make one realize how vast was the change accom- lished by the French Revolution in France. The Court, which Ir. Bradby describes, is superficially very different from that hick Herr Ludwig set before us in his study of the ex- mperor Wilhelm ; and yet in essentials they are close of kin. lonarchy in Germany had remained more or less what Mills XIV helped to make it : an institution resting, in the ind of the monarch, on a supposition that kings are a different species of human being from their subjects ; creatures With a separate function that must be fenced about and pro- ected by barriers of etiquette and observance. In this arded enclosure, technically shut off from observation, and 'et the centre of a million inquisitive eyes, a strange atmo7 sphere was generated, and a special form of ennui. The best videnee of this is that in both these artificial societies pro?, lea' joking was tolerated to an inconceivable degree. On the other hand, the monarch, though a mediocrity, did attain to extraordinary and dangerous force by the control of a machine and by his sense of a right to use it. But from first to last we Move in a world whose actions seem as unaccountable as those of folk in Bedlam. The story which tells how Monsieur, Louis XIV's brother, entrapped a Prince of the Blood into helping him on with his shirt—and so paying homage to his superiority as a Son of France—is a redudio ad absurdum of the whole.

The French Revolution swept out this royalty, and Napoleon set up inother. Napoleon the Third inheriting, based his

claim to succeed on something that was in its way as trans. cendental as the divine right of Louis. Some mystical claim to leadership undoubtedly existed in the mind of this visionary, who brought his vision to pass. But for all that the Man of Destiny was a modern man and belonged to a different world— of which King Edward VII was a member. Many of the Emperor's letters might have been signed by him. On the other hand, Queen Victoria, the constitutional monarch, was really much nearer to Louis XIV's standpoint—especially to the standpoint of his later Maintenon period—than was the Emperor who worked the coup d'elat.

One thing, however, is constant in dynasties—the difficulty of finding employment for the adult males of the Royal Family. Louis XIV felt it, and settled the matter by limiting their opportunities severely. Napoleon the G mat settled it by shoving them all into the kingships which he rendered vacant ; but Napoleon the Third could not deal so drastically. Yet Prince Napoleon, his cousin and friend; whose correspondence with him makes up this book, had it full share of the Bonaparte ambition. He tried to push his Emperor into action over the Italian question—and that suc- ceeded ; but then he tried to push him into declaring against the Pope's Temporal Power—and finally into intervention on behalf of Poland. Modern methods of publicity increased his power to be upsetting, and these letters tell us how the Emperor kept on curbing his indiscreet activities. Yet after all, the Emperor's remonstrances somehow lacked conviction and the professional touch. The two were no more than amateur royalties—a couple of very intelligent Frenchmen. playing at kings and princes of the blood. They had not at their command the instinctive respect and even awe which Louis and Wilhelm inspired—probably because they did not in their hearts feel themselves entitled to this regard. All that is gone for ever in France. Could it, one speculates, be revived in Germany ?