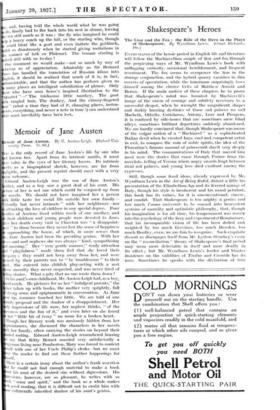 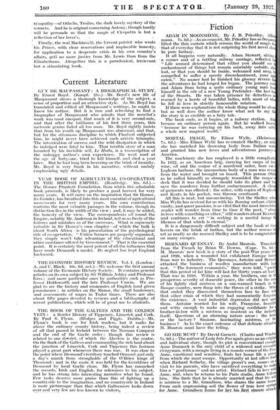 ENTHUSIASTS of the heroic period in English life and literature will follow the Machiavellian couple of lion and fox through the perplexing ways of Mr. Wyndham Lewis's book with unflagging curiosity, occasional bewilderment, and frequent resentment. The fox seems to overpower the lion in the strange conjunction, and the hybrid quarry vanishes in dim coverts of speculation, while the hunstman surprisingly loses .himself among the elusive Celts of Matthew Arnold and Henan. If the main motive of these chapters be to prove that Shakespeare's mind was haunted by Machiavelli's image of the union of courage and subtlety necessary to a successful despot, when he wrought the magnificent shapes and darkly burning destinies of those sad princes we call Macbeth, Othello, Coriolanus, Antony, Lear and Prospero, it is confused by side-issues that arc sometimes mere blind alleys, sometimes brilliant departures suddenly abandoned. We arc hardly convinced that, though Shakespeare was aware of the vulgar notion of a " Machiavel " as a sophisticated Italian devil when he created Iago, cool and competent artist in evil, to compass the ruin of noble spirits, the idea of the Florentine's famous manual of princeeraft dwelt very deeply in his mind. The communications of Italy that moved him most were the stories that came through France from the novelists, telling of Verona where angry swords leapt between rival red palaces, and young love died exultant among the cypresses.

Still, though some fixed ideas, already expressed by Mr. Wyndham Lewis in the Art of Being Ruled, distort a little his presentation of the Elizabethan Age and its fevered mirage of Italy, though his style is incoherent and his mood petulant, this book has its values, for it is unconventional, sincere, and candid. That Shakespeare is too mighty a genius and too much Cuomo universole to be coaxed into benevolent systems of morality and optimistic philosophy, that, though his imagination is for all time, his temperament was woven into the psychology of the fiery and experimental Renaissance, that his incomparable vision of life has been dulled and weighted by too much Gervinus, too much Dowdcn, too much Bradley, even, we are fain to recognize. Such exquisite dissent as disengages itself from Mr. Lytton Strachey's essay on the " reconciliation " theory of Shakespeare's final period may seem more delectable in itself and more deadly in its effect ; but Mr. Wyndham Lewis's louder and blunter insistence on the validities of Troilus and Cressida has its uses. Sometimes he speaks with the divination of true

sympathy—of Othello, Troilus, the dark lovely mystery of the sonnets. And he is original concerning Antony, though hardly will he persuade us that the magic of Cleopatra is but a

reflection of her lover's. - . . Finally, the real_ Machiavelli, the fervent. patriot who wrote

his Prince, with clear reservations and implacable honesty, for application to a desperate crisis: in his own country's affairs, gets no more justice: from Mr.- Lewis than from the Elizabethans. Altogether this. is a paradoxical, irrelevant but a stimulating book.