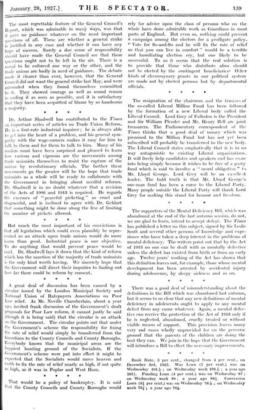 Page 3, 29 January 1927 — The resignation of the chairman and the trustees of the
Close

The resignation of the chairman and the trustees of the

so-called Liberal Million Fund has been followed by the formation of a new Liberal body called the Liberal Council. Lord Grey of Fallodon is the President and Sir William Plender and Mr. Henry Bell arc joint treasurers. The Parliamentary correspondent of the Times thinks that a good deal of money which was promised to the Million Fund but has not yet been subscribed will probably be transferred to the new body. The Liberal Council states emphatically that it is in no way antagonistic to existing Liberal organizations. It will freely help candidates and speakers and has come into being simply because it wishes to be free of a party fund which is said to involve a " moral obligation " to Mr. Lloyd George. Lord Grey will be an excellent leader. The bald truth is that Mr. Lloyd George's one-man fund has been a curse to the Liberal Party. Many people outside the Liberal Party will thank Lord Grey for making this stand for honour and freedom.