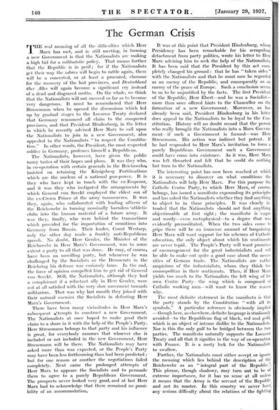 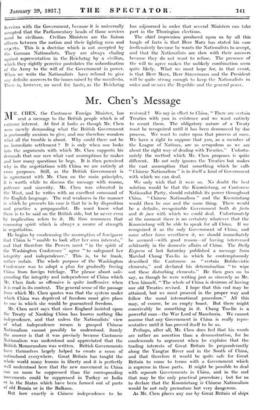 THE real meaning of all the difficulties which Herr Marx has met, and is still meeting, in forming a new Government is that the Nationalists arc making a high bid for a militaristic policy. That means further that the Republic is in peril ; for if the Nationalists get their way the sabres will begin to rattle again, there will be a concerted, or at least a procured, clamour for the recovery of the lost provinces, and Deutschland iiber AIles will again become a significant cry instead of a dead and disgraced motto. On the whole, we think that the Nationalists will not succeed so far as to become very dangerous. It must be remembered that Herr Stresemann when he opened the discussions which led up by gradual stages to the Locarno Treaty declared that Germany renounced all claim to the conquered provinces, and that President Hindenburg, in the letter in which he recently advised Herr Marx to call upon the Nationalists to join in a new Government, also appealed to the Nationalists " to respect the Constitu- tion." In other words, the President, the most respected soldier in Germany, professes himself a Republican.

The Nationalists, however, have given the public many tastes of their hopes and plans. It was they who, in co-operation with certain generals in the Reichswehr, insisted on retaining the Konigsberg Fortifications which arc the nucleus of a national gun-power. It is they who have kept in touch with the ex-Emperor, and it was they who instigated the arrangements by which General von Seeckt employed the eldest son of the ex-Crown Prince at the army manoeuvres. It was they, again, who collaborated with leading officers of the Reichswehr in turning nominally harmless 'athletic clubs into the human material of a future army. It was they, finally, who were behind the transactions which provided for the importation of munitions into Germany from Russia. Their leader, Count Westarp, only the other day made a frankly anti-Republican speech. No doubt, Herr Gessler, the Minister of the Reichswehr in Herr Marx's Government, was to some extent a party to all that was done. He may, of course, have been an unwilling party, but whenever he was challenged by the Socialists or the Democrats in the Reichstag his defence was curiously lame. In the end, the force of opinion compelled him to get rid of General von Seeckt. Still, the Nationalists, although they had a complaisant if a reluctant ally in Herr Gessler, were not at all satisfied with the very slow movement towards militarism. That was why last month they joined with their natural enemies the Socialists in defeating Herr Marx's Government.

There have been many vicissitudes in Herr Marx's subsequent :tempts to construct a new Government. The Nationalists at once hoped to make good their claim to a share in it with the help of the People's Party. Herr Stresemann belongs to that party and his influence is great, for everybody assumes that whoever else is included or not included in the new Government, Herr Stresemann will be there. The Nationalists may have asked more than was expected, or the People's Party may have been less forthcoming than had been predicted ; but for one reason or another the negotiations failed completely. Next came the prolonged attempts of Herr Marx to appease the Socialists and to persuade them to agree to a purely Republican Government. The prospects never looked very good, and at last Herr Marx had to acknowledge that there remained no possi- bility of an accommodation. It was at this point that President Hindenburg, whose Presidency has been remarkable for his scrupulous detachment from party polities, wrote his letter to Hen Marx advising him to seek the help of the Nationalists, It has been said that the President by this act com- pletely changed his ground : that he has " taken sides '! with the Nationalists and that he must now be regarded as an enemy of the Republic, and consequently as an enemy of the peace of Europe. Such a conclusion seems to us to be unjustified by the facts. The first President of the Republic, Herr Ebert—and he was a Socialist— more than once offered hints to the Chancellor on the formation of a new Government. Moreover, as has already been said, President Hindenburg in his letter does appeal to the Nationalists to be loyal to the Con- stitution. History will no doubt record that the person who really brought the Nationalists into a Marx Governs ment—if such a Government is formed—was Hem Stresemann. His action was indirect but potent. It he had responded to Herr Marx's invitation to form a purely Republican Government such a Government could have come into existence. As it was, Herr Marx was left thwarted and felt that he could do nothing but turn to the Nationalists.

The interesting point has now been reached at which it is necessary to discover on what conditions the Nationalists will help Herr Marx. For this purpose the Catholic Centre Party, to which Herr Marx, of course, belongs, has issued a manifesto expounding its principles and has asked the Nationalists whether they find anything to object to in these principles. It was clearly in- tended that the Nationalists should not find anything objectionable at first sight ; the manifesto is vague and wordy—even metaphysical—to a degree that was evidently premeditated. When the two sides come to grips there will be an immense amount of bargaining. Herr Marx will want support for his schemes of Catholic education, the only object about which his sentiments are never tepid. The People's Party will want promises of encouragement for the great industrialists and will be able to make out quite a good case about the neces- sities of German trade. The Nationalists arc rather suspicious of the industrialists, whom they think too cosmopolitan in their sentiments. Then, if Herr Marx yields too much to the Nationalists the left wing of his own Centre Party—the wing which is composed of Catholic working men—will want to know the reason why.

The most definite statement in the manifesto is that the party stands by the Constitution " with all its symbols." A particular reference is obviously implied —though here, as elsewhere, definite language is studiously avoided—to the Republican flag of black, red and gold, which is an object of intense dislike to the Nationalists. Nor is this the only gulf to be bridged between the two parties. The manifesto naturally supports the Loearnd Treaty and all that it signifies in the way of co-operation with France. It is a nasty leek for the Nationalists to swallow.

Further, the Nationalists must either accept or ignore the meaning which lies behind the description of th0 Reichswehr as an " integral part of the Republic.' This phrase, though shadowy, may turn out to be of extreme importance, for it has no sense at all unless it means that the Army is the servant of the Republic, and not its master. In this country we: never have, any serious difficulty about the relations of the fighting Services with the Government, because it is universally accepted that the Parliamentary heads of those services must be civilians. Civilian Ministers are the liaison officers .between the nation and their fighting men and exte.rts. This is a doctrine which is not accepted by the German Nationalists. They are always chafing against representation in the -Reichstag by a civilian, which they rightly perceive postulates the subordination of the Army to the will of the Government in power. When we write the Nationalists have refused to give any definite answers to the issues raised by the manifesto. There is, however, no need for haste, as the Reichstag has adjourned in order that several Ministers can take part in the Thuringian elections.

The chief impression produced upon us by all this tangle of facts is that Herr Marx has stated his ease inoffensively because he wants the Nationalists to accept, and that the Nationalists are slow with their answers because they do not want to refuse. The presence of the will to agree makes the unlikely combination seem quite likely. What we must hope for, in that event, is that Herr Marx, Herr Stresemann and the President will be quite strong enough to keep the Nationalists in order and so save the Republic and the general peace.