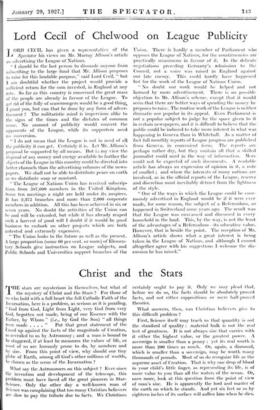 LORD CECIL has given a representative of the Spectator his views on Mr. Murray Allison's article on advertising the League of Nations.

" I should be the last person to dissuade anyone from subscribing to the large fund that Mr. Allison proposes to raise for this laudable purpose," said Lord Cecil, " but I am doubtful whether the project would provide a sufficient return for the sum invested, in England at any rate. So -far as this country is concerned the great mass of the people are already in favour of the League. To get rid of the folly of scaremongers would be a good thing, I grant you, but can that be done by any form of adver- tisement ? The militaristic mind is impervious alike to the signs of the times and the dictates of common sense. No amount of publicity would convert the opponents of the League, while its supporters need no conversion.

" I do not mean that the League is not in need of all the publicity it can get. Certainly it is. Let Mr. Allison's proposal be supported by all means. But ia. my view the disposal of any money and energy available to further the objects of the League in this country could be directed into better channels than the advertising columns of the news- papers. We shall not be able to distribute peace on earth as we distribute soap or mustard.

" The League of Nations Union has received subscrip- tions from 587,000 members in the United Kingdom.

Some ten meetings a night are held under its auspices.

It has 2,375 branches and more than 2,000 corporate members in addition. All this has been achieved in six or seven years. No doubt the activities of the Union can be and will be extended, but while it has already reaped such a harvest of good will I doubt if it would be good business to embark on other projects which arc both untested and extremely expensive.

" The Union looks to the future as well as the present.. A large proportion (some 60 per cent. or more) of Elemen- tary Schools give instruction on League subjects, and Public Schools and Universities support branches of the Union. There is hardly a member of Parliament who opposes the League of Nations, for the constituencies are practically unanimous in favour of it. In the delicate negotiations preceding Germany's admission to the Council, not a voice was raised in England against our late enemy. This could hardly have happened but for the work of the League of Nations Union. " No doubt our work would be helped and not harmed by more advertisement. There is no possible objection to Mr. Allison's scheme, except that it would seem that there are better ways of spending the money he proposes to raise. The routine work of the League is neither dramatic nor popular in its appeal. Even Parliament is not a popular subject to judge by the space given to it in certain newspapers, and it is difficult to believe that the public could be induced to take more interest in what was happening in Geneva than in Whitehall. As a matter of fact full monthly reports of League progress are published from Geneva, in convenient form. The reports arc perhaps rather dry, but they contain all that a skilled journalist could need in the way of information. More could not be expected of such documents. A readable article has always an expression of opinion in it, a note of conflict ; and where the interests of many nations are involved, as in the official reports of the League, reserve and discretion must inevitably detract from the lightness of the style.

" One of the ways in which the League could be enor- mously advertised in England would be if it were ever made, for sonic reason, the subject of a Referendum, as happened in Switzerland some years ago. The result was that the League was canvassed and discussed in every household in the land. This, by the way, is not the least of the advantages of a Referendum—its educative value. However, that is beside the point. The reception of Mr. Allison's article shows what a great interest is being taken in the League of Nations, and although I cannot altogether agree with his suggestions I welcome the dis- cussion he has raised."