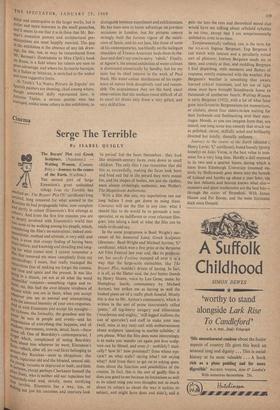 The Boyars' Plot and Greek Sculpture. (Academy.) Waiting Women. (Cameo- Poly.)—Journey to the centre of the Earth. (Carlton.) THE second part of Serge Eisenstein's great unfinished trilogy Ivan the Terrible has reached us: The Boyars' Plot (`U' certificate) long awaited, long censored for what seemed to the Russians its bad propaganda value, now complete and partly in colour (Eisenstein's first attempt at ce'lnur). And from the first few minutes you are an deeply involved with Eisenstein's world that You seem to be walking among his people, which, ennsidering the film's un-naturalistic, indeed anti- !: aturalistic, method and attitude, is very odd; and there is even that creepy feeling of having been t ere before, and knowing and dreading and long- ing for what comes next. I cannot remember a film that removed me more completely from my stirrottnclings; I mean, that really managed the miraculous feat of making me forget the cinema, and lime and space and the present. It was like being ._ in a dream, yet not at all what the word dreamlike' conjures—something vague and re- mote; no, this had the over-lifesize vividness of :reams while you are in them, when you accept :natever you see as normal and unsurprising, And the unusual intensity of your own responses. thrld .so with Eisenstein you accept his eyesight— the richness, the formality, the grandeur and the terrnr he sees in people and events—and his shadows, of everything that happens, and of badnws, movements, crowds, detail, faces—these f °ye all. One of Beardsley's contemporaries, I fc)rger which, complained of seeing Beardsley faaees about him wherever he went. Eisenstein's ,,,ces-----which, after all, are real faces belonging to present-day Russians—seem as ubiquitous : sthe gaunt rapacious old and the bloated, sensual old; ineLY°Ling, vacuous or depraved or both; and little uetWeen, except perhaps Chcrkasov himself (he hlaYs Ivan), who is neither old nor rapacious but til:tanctioly-mad and, strictly, more terrifying rtck41n. terrible. Eisenstein has a way, too, of 411. not just his costumes and interiors look `in period' but the faces themselves: they look like sixteenth-century faces, even down to small children. The only film I can remember that did this as successfully, making the faces look born and bred and fed in the period they were meant for, and the shapes of bodies, not just the clothes, seem almost irritatingly authentic, was Welles's The Magnificent Ambersons.

With a film this size, my superlatives ran out long before I ever got down to using them. Cineastes will see the film in any case; what I should like to do would be to persuade a non- specialist, or an indifferent or even reluctant film- goer, into taking a look at what the film can be made to do and say.

In the same programme is Basil Wright's suc- cessor of his Immortal Land, Greek Sculpture (directors : Basil Wright and Michael Ayrton; certificate), which won a first prize at the Bergamo Art Film Festival last year and, like its predeces- sor, has succes d'estime stamped all over it in a way that the large-scale estimables, like The Boyars' Plot, wouldn't dream of having. In fact, it is all, as the Hatter said, the best butter (hands by Henry Moore, voice by Leo Genn, music by Humphrey Searle, commentary by Michael Ayrton), but strikes me as having as well the hushed pious air of a really plush funeral. Mostly this is due to Mr. Ayrton's commentary, which is written in the sort of prose inaccurately called `poetic,' all top-heavy imagery and alliteration (`murderous and mighty,' stiff-legged stallions the size of sparrows') and stuff to make your toes (well, mine at any rate) curl with embarrassment about sculpture 'speaking in marble syllables,' if you please. What the film does most interestingly is to make you wonder yet again just how sculp- ture can be filmed, and even if: mobilely? stati- cally? how lit? how presented? from whose eye- view? on what scale? saying what? not saying what? And from there to get on to asking ques- tions about the function and possibilities of the cinema. In fact, this is the sort of gadfly film it does you good to see because its limitations as well as its talent sting you into thoughts not so much about its subject as about the way it tackles its subject, and might have done and didn't; and it puts me into the rare and theoretical mood that would have me talking about celluloid syllables in no time, except that I am temperamentally unfitted to, even in no time.

Temperamentally unfitted, too, is the term for me vis-a-vis Ingmar Bergman. Top Bergman I can watch with interest and a peculiarly mixed sort of pleasure; bottom Bergman sends me to sleep, and crossly at that, and middling Bergman I find dispiriting, with moments and flashes of response, mostly connected with the weather. For Bergman's weather is something that awaits learned critical treatment, and his use of light alone must have brought Scandinavia home to thousands of southerner hearts. Waiting Women is early Bergman (1952), with a lot of what later grew into favourite Bergmanisms (or mannerisms, or clichés), about four sisters-in-law waiting for their husbands and flashbacking over their mar- riages. Moods, as you can imagine from that, are mixed; one long scene was comedy that struck me as polished, clever, skilfully acted and brilliantly, directed but totally, dismally unfunny.

Journey to the centre of the Earth (director Henry Levin; `U' certificate), based loosely (pretty loosely) on Jules Verne, is the best value in non- sense for a very long time. Hardly a dull moment in its two and a quarter hours, during which a team from Edinburgh University (manned en- tirely by Hollywood) goes down into the bowels of Iceland and hurtles up about a year later, via the lost Atlantis and heaven knows what else— monsters and giant mushrooms are the best bits— through the crater of Stromboli. With James Mason and Pat Boone, and the most histrionic duck since Donald.