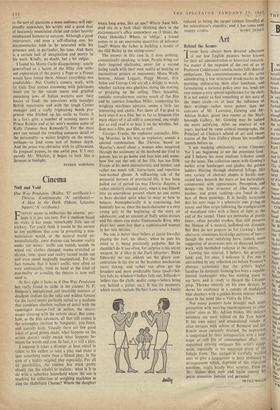 FANTASY seems to embarrass the cinema: per- haps it is just too easy. For a medium based on tricks it has made remarkably little use of trickery. Yet you'd think it would be the answer to any problems that arise in presenting a non- naturalistic world, or the natural world un- naturalistically, since dreams can become reality under our noses: traffic can vanish, sounds be wiped out, clothes changed, rooms stretched or shrunk, time, space and reality turned inside out and even speed magically manipulated. Yet the fact remains that it hasn't really, very often or very ambitiously, tried its hand at the kind of non-reality or a-reality the theatre is now well used to.

At first sight it looks as if One Way Pendulum has really found its niche in the cinema. N. F.

. Simpson's unexplained and insoluble mixture of deadpan realism (in the talk) and wildest fantasy (in the facts) seems perfectly suited to a medium that combines absolute realism of detail with the cunningest trompe-Pail in action, the micro- scopic close-up with the outsize cheat. But some- how, as the film advances, all that still counts is the screenplay (written by Simpson): you listen, and scarcely look. Visually there arc few good jokes or good points made, what happens on the screen doesn't really enrich what happens be- tween the words and you. In fact, it is still a play.

I suppose it takes a director at least equal in talent to his author to take a play and make it into something more than a filmed play; in the case of a highly original play especially. For all its possibilities, the cinema has stuck pretty closely (on the whole) to realism: what is it to do with a suburban household where the son is teaching his collection of weighing machines to sing the Hallelujah Chorus? Where the daughter

wants long arms, like an ape? Where Aunt Mil- dred sits in a bath chair thinking she's in the stationmaster's office somewhere on (1 think) the Outer Hebrides? Where, to 'oblige,', a friend comes in to eat enormous quantities of left-over food? Where the father is building a model of the Old Bailey in the sitting-room?

The answer in this case is, it dots nothing; cinematically speaking, at least. People bring out their inspired platitudes, never for a second losing touch with their own reality or making an inconsistent gesture or movement; Mona Wash- bourne, Alison Leggatt, Peggy Mount, Eric Sykes and George Cole are all a delight to watch, whether tucking into gherkins, doing the ironing, or propping up the ceiling. Their beautiful, amiable everydayness carries much of the film and by contrast Jonathan Miller, conducting his weighing machines upstairs, seems a little too interesting and exotic. For them all I'm glad to have seen it as a film, but as far as Simpson (the main object of it all still) is concerned, one might just as well read it or hear it on the wireless. Sel- dom was a film, qua film, so null.

Georges Franju, the explosive sensualist, Min- ing Mauriac, in his way as explosive, sounds a spirited combination. But Therese, based on Mauriac's novel about a woman who, acquitted through the testimony of the husband she tried to poison, has to go home and face him and some- how live out the rest of her life, has too little Franju at his most characteristic and intense, and rather too much talk, literariness, and repetitive rain-washed gloom. A suffocating tale of the perennial horrors of provincial life, it has been pulled out of period (as was Therese Raquin, a rather similarly situated story, when it was filmed) into an amorphous present where no one seems to have decided quite what to wear or how to behave. Atmospherically it is convincing, but humanly less so, since the main character is a very young girl, at the beginning of the story an adolescent, and no amount of fluffy white dresses and flat shoes can make Emmanuelle Riva, who plays her, seem less than a sophisticated woman in her late thirties.

No one is better than Sellers at (quite literally) playing the fool, his idiocy, when he puts his mind to it, being practically palpable. But he shouldn't do it too often, for surprise is his secret weapon. In A Shot in the Dark (director: Blake Edwards) we too seldom see the glassy con- centration in his eye as the brainless mechanism starts ticking, and rather too often get the broadest and most predictable farce (pool=Sel- lers falls in; window=Sellers falls out; billiards= Sellers rips the cloth; nudist camp=Sellers being coy behind a guitar, etc.). It has its moments, which mostly include Herbert Lom, who is finally

reduced to biting the carpet (almost literally) at his subordinate's stupidity; and it has some very