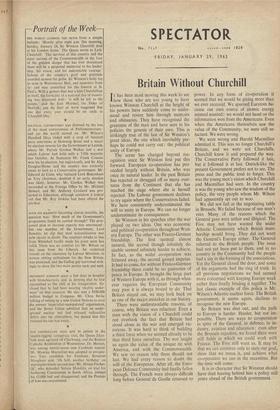 THE WORLD LEARNED THE NEWS from a simple bulletin : 'Shortly after eight a.m. this morning, Sunday, January 24, Sir Winston Churchill died at his London home.' The Queen wrote to Lady Churchill: 'The survival of this country and the sister nations of the Commonwealth in the face of the greatest danger that has ever threatened them will be a perpetual memorial to his leader- ship, his vision, and his indomitable courage.' Echoes of the country's grief and gratitude sounded around the globe. Sir Winston's body lay in state in Westminster Hall, and mourners from fa- and near assembled for the funeral at St. Paul's. With a gesture that was a hint Churchillian in itself, the formality of a national day of mourn- ing was dispensed with 'it will be left to the people,' said the Earl Marshal, the. Duke of Norfolk; and the Earl of Avon suggested that one day every year should be set aside as 'Churchill Day.

POI 111CAL CONTROVERSY was dimmed by the loss of the most controversial of Parliamentarians : and yet the world moved on. Mr. Wilson's Hundred Days ended with a crop of buoyant press interviews at Downing Street and a major by-election reverse for the Government at Leyton, where Mr. Patrick Gordon Walker lost a scat which Labour had held with a 7,926 majority last OctOber. At Nuneaton Mr. Frank Cousins won his by-election, but ingloriously, and Sir Alec Douglas-Home said the country was evidently ready to turn to a Conservative government. Mr. Edward du Cann, who replaced Lord Blakenham as Tory chairman, doubted if an early election was likely, however. Mr. Gordon Walker was succeeded at the Foreign Office by Mr. Michael Stewart, and Mr. Anthony Crosland was pro- moted to Education, although somehow it leaked out that Mr. Roy Jenkins had been offered the job first.

writ ITS MAJORITY becoming almost invisible, the question was: How much of the Government's programme could be carried through? The post- poned plan to increase exports was announced : but one member of the Government, Lord Bowden, let slip that steel nationalisation was ndw clearly in doubt. The resultant rebuke to him from Whitehall hardly made his point seem less valid. There was no comfort for Mr. Wilson on this issue from the Liberals. An oratorical assault on the electorate by Labour Ministers, to restore ebbing enthusiasm for the New Britain, was promised; and the Gallup gap narrowed strik- ingly to show the two main parties neck and neck.

PRESIDENT JOHNSON spent a few days in hospital with bronchiectasis, and. in denying that he had succumbed to the chill at his inauguration, dis- closed that he had been wearing 'electric under- wear' on that occasion. He also sent a $100,000 million budget to Congress. Mr. Chou En-lai talking of setting up a new United Nations to rival the present imperialist-manipulated' organisation, and the Soviet Union admitted that an under- ground nuclear test had released radioactive debris into the atmosphere, but denied that this violated the test ban treaty.

TIN FOOTBALLERS were sent to prison in the 'match-rigging' conspiracy trial, the Queen Eliza- beth went aground off Cherbourg, and the Roman Catholic Archbishop of Westminster, Dr. Heenan, 'was among twenty-seven new Cardinals named. Mr. Maurice Macmillan was adopted as prospec- tive Tory candidate for Farnham. Somerset Maugham said, 'Oh hell, another birthday' on starting his ninety-second year; Mr. Abram Fischer, QC, who defended Nelson Mandela, on trial for furthering Communism in South Africa, jumped his £5,000 bail and disappeared; and the Premier of Iran was assassinated.