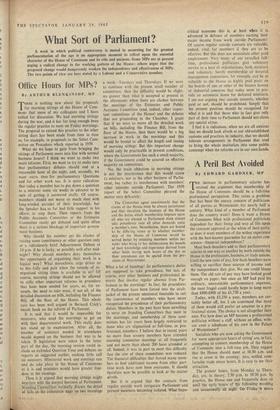 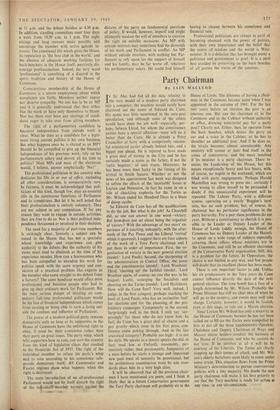 IE increase in parliamentary salaries has

revived the argument that membership of the House of Commons should be a full-time professional occupation. This raises a problem that has been the uneasy concern of politicians of all parties at Westminster for nearly half a century. What kind of a member of Parliament does the country want? Does it want a House of Commons filled with professional politicians dependent for their living and way of life upon the constant approval or the whim of their party, or does it want members of the widest experience with the best-known guarantee for an active con- science—financial independence?

Most back-benchers add to their parliamentary salaries in one way or another by work outside the House in the professions, business, or trade unions.

Until the new rates of pay, few back-benchers were

willing to sacrifice these sources of income and the independence they give. No one could blame

them. The old rate of pay may have looked good enough on paper, but once an MP had paid his ordinary, unavoidable parliamentary expenses, the most frugal could hardly hope to keep more than £800-£900 of his £1,750 a year.- Today, with £3,250 a year, members are cer- tainly better off, but I am convinced that most of them would still prefer an amateur to a pro- fessional status. The choice is not altogether their own. For how does an MP become a professional politician without a staff, without an office, with- out even a telephone of his own in the Palace of Westminster?

Socialists who are now asking the Government for 'more appropriate hours of sitting' are, in fact, attempting to convert membership of the House of Commons into a full-time job. They suggest that the House should meet at 10.30 a.m. and rise at seven in the evening: nice, settled, com- fortable trade union hours. It is easy to see their attraction.

The present hours, from Monday to Thurs- day, are, in theory, 2.30 p.m. to 10.30 p.m. In practice, the House can and frequently does sit until the early hours of the follosiiing and occasionally 'all night. On Friday it meets

at 11 a.m. and the debate finishes at 4.30 p.m. In addition, standing committees meet four days a week from 10.30 a.m. to 1 p.m. The night sittings and long recesses make possible and encourage the member with active outside in- terests. The communal life which gives the House its reputation as `the best club in the world,' and the absence of adequate working facilities for back-benchers in the House itself, positively dis- courage professionalism. Indeed, the very word `professional' is something of a discord in the spirit, tradition and history of the House of Commons.

Conscientious membership of the House of Commons is a severe employment about which complaints are futile. Members neither expect nor deserve sympathy. No one has to be an MP and it is generally understood that they either like the work or have only themselves to blame. Nor has there ever been any shortage of candi- dates eager to take over from sitting members.

The right of a parliamentary candidate to financial independence from outside work is clear. What he does as a candidate for a legiti- mate living outside politics is his own business. But what happens once he is elected as an MP? Should he be compelled to give up the financial independence of his previous work, rely on his parliamentary salary and devote all his time to politics? Most MPs and most of the electorate would, I believe, answer emphatically `Nor

The professional politician in this country who dedicates his life in or out of office, excluding all other considerations, is comparatively rare. In fairness, it must be acknowledged that poli- ticians of this kind, though few, play an essential role in the continuous functions of Parliament and its committees. But let it be well noted that their professionalism is entirely voluntary. They are not subject to any. compulsion. If for any reason they want to engage in outside activities, they are free to do so. Nor is their political inde- pendence threatened or involved in their decision.

The need for a majority of part-time members is strikingly clear. Scarcely a subject can be raised in the House that has not a specialist whose knowledge and experience can give authority to the debate. But the authority of his views must tend to diminish as the time of his experience recedes. How can a businessman who has been compelled to abandon his work for politics speak with the same urgency and con- viction of a practical problem like exports as the member who came straight to the debate from a factory? The same handicap would affect most professional and business people who had to give up their ordinary work for Parliament. But the most serious danger of insisting on com- pulsory full-time professional politicians would be the loss of financial independence which comes from earning or being able to earn a living out- side the confines and influence of Parliament.

The power of a modern political party remains democratic only so long as its supporters in the House of Commons have the unfettered right to obey, if need be, their conscience rather than their party on great issues. The party whip, which tells supporters how to vote, can save the country from the kind of legislative chaos that resulted in the Homicide Act of 1957. The right of the individual member to refuse his party's whip and to vote according to his conscience safe- guards democracy itself. All Communist and Fascist regimes show what happens when this right is destroyed.

dictates of his party on fundamental questions of policy. It would, however, imperil and might ultimately weaken the will of members to exercise the right on suitable occasions. An MP with outside interests may sometimes find the demands of his work and Parliament in conflict. An MP without outside interests, with nothing but Par- liament to rely upon for the support of himself and his family, may be far worse off, whatever his parliamentary salary. He could find himself

having to choose between his conscience and financial ruin.

Professional politicians are always in peril of becoming obsessed with the power of politics, with their own importance and the belief that the centre of wisdom and the world is West- minster. It is a delusion that has brought many a politician and government to grief. It is a peril best avoided by preserving on the back benches of all parties the status of the amateur.