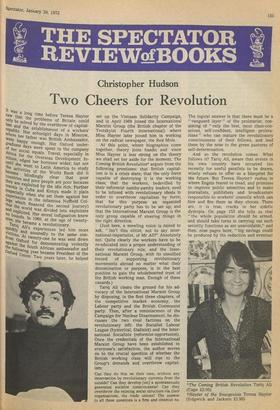 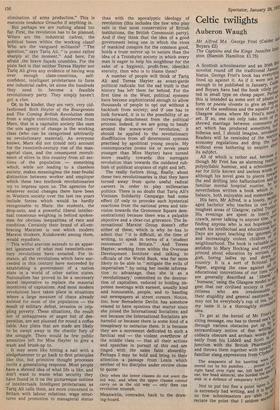 It was a long time before Teresa Hayter saw that the problems of Britain could 9nly be solved by the overthrow of capitalIsm and the establishment of a workers, rePublic. Her schoolgirl days in Moscow, Where her father was British Ambassador, Were happy enough. Her Oxford undergraduate days were spent in the company Afof her social equals. Travel, especially in rica for the Overseas Development Institute, edged her horizons wider; but not until she went to Latin America to study the activities of the World Bank did it become blindingly clear that poor Countries and poor people are poor because they are exploited by the idle rich. Further travels in Cuba and Kenya made it plain (esPecially when she set them against her experiences in the infamous Nuffield Col lege which financed the second journey) that the world was divided into exploiters and exploited. Her moral indignation knew n9 bounds. In 1969, at the age of twenty 11'112, she became a revolutionary. Tariq Ali' s experiences led him more and assuredly to the same convictions. At twenty-one he was sent down from Oxford for demonstrating violently a_gairist the South African ambassador and e f°11°w n g year became President of the °Xford Union. Two years later, he helped set up the Vietnam Solidarity Campaign, and in April 1968 joined the International Marxist Group (the British chapter of the Trotskyist Fourth International) where Miss Hayter later joined him in working on the radical newspaper, the Red Mole.

At this point, where biographies come together, theory joins hands; and since Miss Hayter is less strong on the theory we shall set her aside for the moment. The Coming British Revolutions argues from the following premisses: that British capitalism is in a crisis state; that the only force capable of destroying it is the working class; that the workers, bedevilled by their reformist namby-pamby leaders, need to be infused with revolutionary ideals in order to overthrow capitalism by force; that for this purpose an organised revolutionary party has to be set up; and that the International Marxist Group is the only group capable of steering things in the right direction.

(Just here, a mewling voice is raised to ask, " Isn't this elitist, not to say international-imperialist, of Mr Ali?" Absolutely not. Quite clearly the workers have to be re-educated into a proper understanding of their revolutionary role, and the International Marxist Group, with its unsullied record of supporting revolutionary movements abroad no matter what their denomination or purpose, is in the best position to gain the wholehearted trust of the British working man. Enough of these canards.) Tariq Ali clears the ground for his advocacy of the International Marxist Group by disposing, in the first three chapters, of the competitive market economy, the Labour party and the British Communist party. Then, after a reminiscence of the Campaign for Nuclear Disarmament, he discusses the two rival factions on the revolutionary left: the Socialist Labour League (hysterical, Stalinist) and the International Socialists (reformist-opportunist). Once the credentials of the International Marxist Group have been established to everyone's satisfaction, the author moves on to the crucial question of whether the British working class will rise to the Group's demands and overthrow capitalism:

Can they do this on their own, without any intervention by revolutionary currents from the outside? Can they develop [sic] a spontaneously generated socialist consciousness? Can they overthrow the existing social structure via their organisations, the trade unions? The answer to all these questions is a firm and clearcut no.

The logical answer is that there must be a "vanguard layer" of the proletariat, consisting of "only the best, most class-conscious, self-confident, intelligent proletarians" who can mature the revolutionary consciousness of their fellows, and lead them by the nose to the green pastures of self-determination.

And so the revolution comes. What follows it? Tariq Ali, aware that events in his own country have occurred too recently for useful parallels to be drawn, wisely refuses to offer us a blueprint for the future. But Teresa Haytert rushes in where Engels feared to tread, and promises to improve public amenities and to make journalists, publishers and broadcasters responsible to workers' councils which can hire and fire them as they choose. There are, it is true, cracks in her eidetic dystopia. On page 153 she tells us that "the whole population should be armed, and should take turns in carrying out such security functions as are unavoidable," and then, nine pages later, "big savings could be produced by the reduction and eventual elimination of arms production." This is marxiste tendence Groucho if anything is.

But perhaps we are rushing ahead too far. First, the revolution has to be planned. Where are the industrial cadres, the political bases within the working class? Who are the vanguard militants? "The question," says Tariq Ali, "is posed rather sharply at the moment." And here, I'm afraid ,the brave façade crumbles. For the plain fact is that neither Teresa Hayter nor Tariq Ali gives any evidence of having won over enough class-conscious, selfconfident, intelligent proletarians to form one industrial cadre, let alone the hundreds they need to become a feasible revolutionary party. They simply haven't got a clue.

Or, to be kinder, they are very, very oldfashioned. Both Hayter of the Bourgeoisie and The Corning British Revolution stem from a single conviction, disinterred from Marx, that in a capitalist society like ours the sole agency of change is the working class (who can be categorised arbitrarily as revolutionary material). As everyone knows, Marx did not (could not) account for the twentieth-century rise of the managerial class, and the consequent recruitment of elites in this country from all sections of the population — something which, while not leading to a classless society, makes meaningless the near-feudal distinction between worker and employer which these two textbook revolutionaries try to impress upon us. The agencies for whatever social changes there have been in Western society over the last ten years include forces which would be hardly recognisable to Marx: the students, the drop-outs, and a powerful liberal intellectual consensus weighing in behind spokesmen for obvious inequalities of race and condition. Certainly their brand of all-embracing Marxism is one which modern Marxist thinkers, Kolakowski among them, would repudiate.

This wilful atavism extends to an apparent ignorance of what real twentieth-century revolutions have entailed. For instance, all the revolutions which have succeeded in this century have succeeded by establishing a government of a nation state in a world of other nation states. Nationalism has proved to be a necessary moral imperative to replace the material incentives of capitalism. And most modern revolutions have taken place in situations where a large measure of chaos already existed for most of the population — the result of military defeat, invasion or crippling poverty. These situations, the result not of unhappiness or anger but of desperation, are not planned for round a coffee table. Any plans that are made are likely to be swept away in the chaotic fury of the struggle. There would be few public amenities left for Miss Hayter to give a wash and brush-up to.

It may seem like hitting a nail with a sledgehammer to go back to first principles like this, but primitive thought processes invite a generalising response. Most people have a shrewd idea of what life is like, and don't want to waste what security they have found in it on the picturesque notions of intellectuals. Intelligent proletarians, as Tariq Ali calls them, are more concerned in Britain with labour relations, wage structures and promotion to managerial status than with the apocalyptic ideology of revolution (this includes the few who play safe in that most conservative of British institutions, the British Communist party). And if they think that the idea of a good government being one in which the vices of mankind conspire for the common good, holds a truer mirror up to nature than the idea of a Trotskyist society in which every man is eager to help his neighbour for the sake of a hygienic, profit-free, identikit eternity, then who is to blame them?

A number of people will think of Tariq Ali and Teresa Hayter as avant-garde political radicals: but the sad truth is that history has left them far behind. For the first time in the West, political systems have become sophisticated enough to allow thousands of people to opt out without a backlash from society; and if one has to look forward, it is to the possibility of an increasing detachment from the political-process. Indeed, if we are going to bandy around the nonce-word 'revolution,' it should be applied to the revolutionary disaffiliation from all determinist systems practised by apolitical young people. My contemporaries (some six or seven years younger than Miss Hayter) have turned more readily towards this surrogate revolution than towards the outdated rubbish of political utopians of right and left.

The really forlorn thing, finally, about these two revolutionaries is that they have turned away from quite useful radical careers in order to play millenarian politics. There is no doubt that Tariq Al's Vietnam Solidarity Campaign had some effect (if only to provoke such hysterical reactions from the national press and television towards the Grosvenor Square demonstrations) because there was a palpable objective and a clear-cut grievance. The International Marxist Group doesn't offer either of these, which is why he has to admit that " it is difficult, at the time of writing, to speak in terms of a student movement' in Britain." And Teresa Hayter, working from within the Overseas Development Institute and talking to officials of the World Bank, was far more likely to be able to "mitigate the evils of imperialism" by using her inside information to advantage, than she is as a revolutionary,' committed to the destruction of capitalism, reduced to holding impotent meetings with earnest, usually kind and honourable, people, and to handing out newspapers at street corners. Notice, too, how Bernadette Devlin has somehow ceased to have opinions that matter since she joined the International Socialists; and not because the International Socialists are harmful or because there is some kind of a conspiracy to ostracise them. It is because they are a movement dedicated to such a farcical end — the violent overthrow of the middle class — that all their actions and speeches in pursuit of this end are tinged with the same faint absurdity. Perhaps I may be bold and bring to their attention a passage from Lenin which neither of his disciples under review chose to quote: Only when the lower classes do not want the old way, and when the upper classes cannot carry on in the old way — only then can revolution triumph.

Meanwhile, comrades, back to the drawing-board.