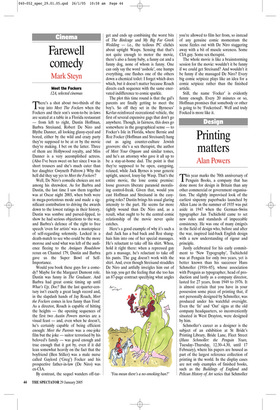 Meet the Fockers 12A, selected cinemas

There’s a shot about two-thirds of the way into Meet The Fockers when the Fockers and their son’s soon-to-be in-laws are seated at a table in a Florida restaurant — from left to right, Dustin Hoffman, Barbra Streisand, Robert De Niro and Blythe Danner, all looking glassy-eyed and bored, either by the wild and crazy party they’re supposed to be at or by the movie they’re making. I bet on the latter. Three of them are Hollywood royalty, and Miss Danner is a very accomplished actress. (Also I’ve been sweet on her since I was in short trousers and she’s much cuter than her daughter Gwyneth Paltrow.) Why the hell did they say yes to Meet the Fockers?

Well, De Niro’s comedic choices are not among his shrewdest. As for Barbra and Dustin, the last time I saw them together was at Oscar night 2003, when both were in mega-portentous mode and made a significant contribution to driving the awards down to the lowest ratings in their history. Dustin was sombre and pursed-lipped, to show he had serious objections to the war, and Barbra’s defence of the right to free speech ‘even for artists’ was a masterpiece of self-regarding solemnity. Locked in a death-match to see who could be the more morose and send what was left of the audience fleeing to the Antiques Roadshow rerun on Channel 179, Dustin and Barbra gave us the Super Bowl of SelfImportance.

Would you book these guys for a comedy? Maybe for the Margaret Dumont role. Dustin was funny in The Graduate. And Barbra had great comic timing up until What’s Up, Doc? But the last quarter-century isn’t exactly a great laugh record and, in the slapdash hands of Jay Roach, Meet the Fockers comes in less funny than Yentl. As a director, Roach is capable of hitting the heights — the opening sequences of the first two Austin Powers movies are a visual feast — and, even when he doesn’t, he’s certainly capable of being efficient enough: Meet the Parents was a one-joke film but the joke — suitor terrorised by his beloved’s family — was good enough and true enough that it got by, even if it did lean somewhat heavily on the fact that the boyfriend (Ben Stiller) was a male nurse called Gaylord (‘Greg’) Focker and his prospective father-in-law (De Niro) was ex-CIA.

By contrast, the sequel wanders off-tar get and ends up combining the worst bits of The Birdcage and My Big Fat Greek Wedding — i.e., the tedious PC clichés about uptight Wasps. Sensing that that’s not quite enough to motor the movie, there’s also a funny baby, a funny cat and a funny dog, none of whom is funny. One can only say the word ‘asshole’, one humps everything, one flushes one of the others down a chemical toilet: I forget which does which, but it doesn’t matter because Roach directs each sequence with the same enervated indifference to comic sparkle.

The plot this time round is that the gal’s parents are finally getting to meet the boy’s. So off they set in the Byrneses’ Kevlar-reinforced recreational vehicle, the first of several expensive gags that don’t go anywhere. Though, in fairness, this does go somewhere in the geographical sense — to Focker’s Isle in Florida, where Bernie and Roz Focker (Hoffman and Streisand) hang out as aging counter-culture Jewish groovers: she’s a sex therapist, the author of Meet Your Orgasm and similar tomes, and he’s an attorney who gave it all up to be a stay-at-home dad. The point is that they’re supposed to be open, easygoing, relaxed, while Jack Byrnes is your generic uptight, uncool, lousy-lay Wasp. That’s the entire movie, the lone comic premise: loose groovers liberate paranoid moralising control-freak. Given that, would you cast Hoffman and Streisand in the easygoing roles? Dustin brings his usual glaring intensity to the part. He seems far more tightly wound than De Niro and, as a result, what ought to be the central comic relationship of the movie never quite catches.

Here’s a good example of why it’s such a dud: Jack has a bad back and Roz shanghais him into one of her special massages. He’s reluctant to take off his shirt. Whoa, hold it right there: when a repressed guy gets a massage, he’s reluctant to take off his pants. The gag doesn’t work with the shirt. And, even though Streisand straddles De Niro and artfully inveigles him out of his top, you get the feeling that she too has an 87-page contract specifying what angles you’re allowed to film her from, so instead of any genuine comic momentum the scene fizzles out with De Niro staggering away with a bit of muscle soreness. Some CIA guy. Some sex therapist.

Still, the name ‘Focker’ is evidently funny enough. Every 20 minutes or so, Hoffman promises that somebody or other is going to be ‘Fockerised’. Well and truly Focked is more like it.