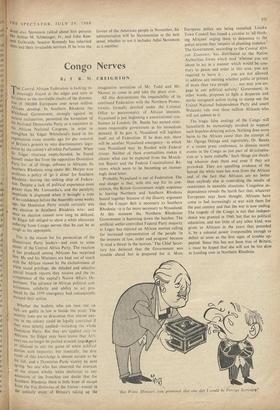 By I R. M. CREIGHTON

Tut: Central African Federation is looking in- creasingly frayed at the edges and torn at the centre as the inevitable results of the domina- tion of 300,000 Europeans over seven million Africans develop. In Southern Rhodesia the Whitehead Government, strongly against its natural inclinations, permitted the formation of the National Democratic Party as a successor to the African National Congress, in order to strengthen Sir Edgar Whitehead's hand in his negotiations some months ago for The removal 01 Britain's powers to veto discriminatory legis- lation by the colony's all-white Parliament. When Sir Edgar returned empty-handed, he found himself under fire from the opposition Dominion Party for, of all things, softness to Africans. Its Southern Rhodesia wing under Mr. Harper now professes a policy of 'go it alone' for Southern Rhodesia—leaving the sinking ship of Federa- tion. Despite a lack of political experience even greater than Mr. Lumumba's, and the paralytic ineptitude it displayed when it brought a vote of no confidence before the Assembly some weeks ago, the Dominion Party would certainly win anY election in Southern Rhodesia now; and since an election cannot now long be delayed, Sir Edgar felt obliged to show a white electorate suffering from Congo nerves that he can be as tough as his opponents.

This is the reason for his persecutiqn of the Democratic Party leaders—and even to some extent of the Central Africa Party. The reaction it has produced among Africans has surprised him. He and his Ministers are kept out of touch With the African masses by the exclusiveness of white social privilege, the deluded and selective special branch reports they receive and the in- competence of the capital's Native Affairs De- partment. The advance itr African political con- sciousness, solidarity and ability to act pro- duced by the 1959 emergency had consequently escaped their notice.

Whether the leaders, who are now out on bail, are guilty in law is beside the point. The security laws are so draconian that almost any- one in the colony could be legally convicted if they were strictly applied—including the whole Dominion Party. But they are applied only to Africans. Sir Edgar may have learnt that Afri- cans can no longer be pushed around, imprired or released to suit the game of white polcal Parties with impunity; but ironically, the first result of this knowledge is almost certain to be his fall, and a Dominion Party victory by next Spring. No one who has observed the aversion of the almost wholly white electorate to any extension of the franchise can doubt that for Southern Rhodesia there is little hope of escape from the Via Dolorosa of the Union—except in the unlikely event of Britain's taking up the

imaginative invitation of Mr. Todd and Mr. Nkomo to come in and take the place over.

All this demonstrates the impossibility of its continued 'Federation with the Northern Protec- torates, formally devoted under the Colonial Office to paramountcy of African interests. Nyasaland is just beginning a constitutional con- ference in London. Dr. Banda has named mini- mum responsible government as his immediate demand. If he gets it, Nyasaland will legislate itself out of Federation. If he does not, there will be another Nyasaland emergency—in which case Nyasaland may be flooded with Federal troops. Neither of these eventualities makes it clearer what can be expected from the Monck- ton Report and the Federal Constitutional Re- views which seem to be becoming an increas- ingly dead letter.

Probably Nyasaland is out of Federation. The real danger is that, with this sop for its con- science, the British Government might acquiesce h. leaving Northern and Southern Rhodesia bound together because of the illusory argument that the Copper Belt is necessary to Southern Rhodesia—it is far more necessary to Nyasaland. At this moment the Northern Rhodesian Government is battening down the hatches. The artificial settler-controlled Federal Party majority

Legco has rejected an African motion calling for increased representation of the people 'in the interests of law, order and progress' because 'it read a threat in the motion.' The Chief Secre- tary has declared that the Government sees trouble ahead but is prepared for it. More

European police are being recruited. Lusaka Town Council has issued a circular to 'all think- ing Africans' urging them to denounce to the police anyone they 'suspect 'of planning violence.' The Government, according to the Central Afri- can Examiner, has distributed to the Native Authorities forms which read 'whereas you are about to act in a manner which would be con- trary to peace and order in this area, you are required to leave it . . . you are not allowed to address any meeting whether public or private of more than two people . . . nor may you en- gage in any political activity.' Government, in other words, proposes to fight a desperate and sterile rearguard action trying to stamp out the United National Independence Party and assert Welensky rule over three million Africans who will not submit to it.

The tragic false analogy of the Congo will henceforth be increasingly invoked to support such hopeless delaying action. Nothing does more harm to the African cause than the attempt of Mr. Oginga Odinga and, regrettably, Dr. Banda a' a recent press conference, to dismiss recent ents in the Congo as just part of de-colonisa- tion or 'a mere reshuffle.' Such things are shock- ing whoever does them and even if they are provoked. They are appalling evidence of the hatred the white man has won from the African and of the fact that Africans are no better than anybody else at controlling the results of resentment in unstable situations. Congolese in- dependence reveals the harsh fact that, whatever Europeans may have thought, Africans have come to feel increasingly at war with them for the past century and that the war is now ending.

The tragedy of the Congo is not that indepen- dence was granted in 1960, but that no political education, and too little of any other kind, was given to Africans in the years that preceded it, by a colonial power irresponsible enough to defect as soon as the first signs of trouble ap- peared. Since this has not been true of Britain, must be hoped that she will not be too slow in handing over in Northern Rhodesia.

'But Prime Minister, you prmnised that one day I could he Foreign Secretary.'