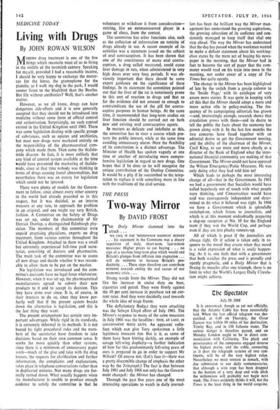 MODERN drug treatment is one of the few things which reconcile most of us to living in the middle of the twentieth century. Speaking for myself, provided I had a reasonable income, I should be very happy to exchange the motor- car for the horse, the gramophone for the pianola; as I walk my dog in the park, I would sooner listen to the blackbird than the Beatles. But life without antibiotics? Well, that's another matter.

However, as we all know, drugs can have dangerous side-effects and it is now generally accepted that they should not be introduced into medicine without some form of official control and authorisation. Surprisingly, no such control existed in the United Kingdom until 1963. There was some legislation dealing with specific groups of substances, such as opiates and antibiotics, but most new drugs were marketed entirely on the responsibility of the pharmaceutical com- pany which made them. Then came the thalido- mide disaster. In fact, it is most unlikely that any kind of control system available at the time would have prevented the marketing of thalido- mide, since at that time nobody was thinking in terms of drugs causing foetal abnormalities, but nevertheless there was an outcry for legislation which could not be ignored.

There were plenty of models for the Govern. ment to follow, since almost every other country in the world had already preceded us in this respect, but it was decided, as an interim measure at any rate, to approach the problem in an original, and one might say very British, fashion. A Committee on the Safety of Drugs was set up, under the chairmanship of Sir Derrick Dunlop, a distinguished Edinburgh phy- sician. The members of this committee were unpaid practising physicians, experts on drug treatment, from various centres throughout the United Kingdom. Attached to them was a small but extremely experienced full-time paid secre- tariat, consisting of doctors and pharmacists. The main task of the committee was to assess all new drugs and decide whether it was reason- able to allow them to be put on the market.

No legislation was introduced and the com- mittee's decisions have no legal force whatsoever. However, when it was set up, the pharmaceutical manufacturers agreed to submit their new products to it and to accept its decision. This they have done ever since. It is, of course, in their interests to do so, since they know per- fectly well that if the present system breaks down the alternative is legislation, and this is the last thing they want.

The present arrangement has certain very im- portant advantages. While rigid in its standards, it is extremely informal in its methods. It is not bound by tight procedural rules and the mem- bers of the secretariat have freedom to take decisions based on their own common sense. It works far more quickly than other systems, since there is a minimum of unnecessary paper work—much of the give and take with the drug houses, the requests for clarification and further information, the complaints and explanations, takes place in telephone conversations rather than in duplicated minutes. Not many drugs are for- mally turned down. What usually happens when the manufacturer is unable to produce enough evidence to satisfy the committee is that he

volunteers to withdraw it from consideration— retiring, like an outmanoeuvred player in a game of chess, from the contest.

The committee has other functions also, such as the collection of information on toxicity of drugs already in use. A recent example of its activities was a statement issued on the subject of oral contraceptives. It has been shown that one of the constituents of many oral contra- ceptives, a drug called mestranol, could cause liver damage in rats, when administered in very high doses over very long periods. It was ob- viously important that there should be some expert guidance on the significance of these findings. In its statement the committee pointed out that the liver of the rat is notoriously prone to this sort of reaction to drugs and that so far the evidence did not amount to enough to contraindicate the use of the pill for contra- ceptive purposes in human beings. At the same time, it recommended that long-term studies on liver function should be carried out on both new and existing oral contraceptive agents.

In matters as delicate and indefinite as this, the committee has to steer a course which pro- tects the public interest, while at the same time avoiding unnecessary alarm. Here the flexibility of its constitution is a distinct advantage. The Minister of Health has spoken vaguely at one time or another of introducing more compre- hensive legislation in regard to new drugs. One hopes that if he does so he will recognise the unique contribution of the Dunlop Committee. It would be a pity if he succumbed to the temp- tation to replace it with something more in line with the traditions of the civil service.