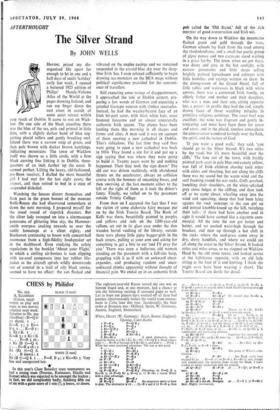 HAVING prised my dis- organised life apart far enough to let in one and a half days of sunlit 'holiday' early last week, I opened a battered 1925 edition of Philips' Handy-Volume Atlas of the World at the pages showing Ireland, and ran my finger down the east coast in search of some quiet retreat within easy reach of Dublin. It came to rest on Wick- low. On one side of the black coastline there was the blue of the sea, pale and printed in little dots, with a slightly darker band of blue sug- gesting placid rollers and gently breaking surf. Inland there was a narrow strip of green, and then pale brown with darker brown hatchings, indicating mountains. The town of Wicklow itself was shown as a little circle, with a firm black curving line linking it to Dublin, three- quarters of an inch farther up the coast. It seemed perfect. Lifting the heavy, old-fashioned, pre-Benn receiver, I dialled the most beautiful girl I had met for the last eight years, the airport, and then retired to bed in a state of suspended disbelief.

Watching the houses distort themselves and flash past in the green bonnet of the monster Rolls-Royce she had discovered somewhere at dawn the next morning, I prepared myself for the usual round of slapstick disasters. But the silver lady swooped on into a cinemascope panorama of glittering blue sky, the Hammer- smith overpass snaking towards us over the sunlit housetops at a silent eighty, and Beethoven continuing to boom with concert-hall resonance from a high-fidelity loudspeaker set in the dashboard. Even studying the safety regulations in the booklet 'About your Flight,' in which a smiling air-hostess is seen slipping with ice-cool composure into her rubber life- jacket as the aircraft spirals wildly downwards out of control in a trail of oily black smoke, seemed to have no effect: the sun flashed and vibrated on the engine casings and we remained suspended in the crystal-blue sky over the deep- blue Irish Sea. I even relaxed sufficiently to begin drawing sea-monsters on the BEA maps without political significance provided for the conveni- ence of travellers.

Still expecting some twinge of disappointment, I approached the taxi at Dublin airport, pre- paring a few words of German and expecting a grizzled Gestapo veteran with rimless spectacles. Instead, he had the weatherbeaten face of an Irish bit-part actor, with thick white hair, stout bronzed forearms and an almost unnaturally authentic Irish accent. 'The planes have been landing there this morning in all shapes and forms and sizes. A man said it was on account of them opening a new cathedral in Dublin. That's ridiculous. The last time they said they were going to open a new cathedral was back in 1934. They found a site for it and put up a sign saying that was where they were going to build it. Twenty years went by and nothing happened. Then they took the sign down.' The old car was driven recklessly, with abandoned thrusts on the accelerator, always on collision course with the bonnets of oncoming buses, and then swerving at the last moment either to the left or the right of them as it took the driver's fancy. Finally, we rolled on to the pavement outside Trinity College.

From then on I accepted the fact that I was the victim of some elaborate fairy masque put on by the Irish Tourist Board. The Book of Kells was there, beautifully painted in purples and yellows and reds on the 1200-year-old vellum, set out in its glass case under the dim wooden barrel vaulting of the library; outside there were plump little gipsy beggar-girls in the back streets, pulling at your arm and asking for something to get a bite to eat 'and I'll pray for you.' There was even a ludicrous old woman standing on the pavement with a full-size harp, grappling with it as if with an awkward chest- expander, and producing random and unco- ordinated plunks apparently without thought of financial gain. We ended up in an authentic Irish pub called the 'Old Stand,' full of the rich murmur of good conversation and Irish wit.

On the way down to Wicklow the mountains flashed green and gold through the trees, German schools lay back from the road among the rhododendrons, and a small but poetic group of gipsy ponies and two caravans stood waiting in a grass lay-by. The town, when we got there, was dusty and grey in the hot sunlight, with narrow pavements and little shops selling brightly painted leprechauns and ashtrays with little homilies and sayings written on them. In the dining-room of the Grand Hotel, full of little tables and waitresses in black with white aprons, there was a contented Irish family, an elderly father and mother and their daughter, who was a nun, and their son, sitting opposite her, a priest: in profile they had the red, simply drawn faces of those watching miracles in primitive religious paintings. The roast beef was excellent, the wine was fragrant and gently in- toxicating and must have been there for years and years, and in the placid, timeless atmosphere the conversation wandered lovingly over the flesh, the spirit, and the nature of God.

'If you want a good walk,' they said, 'you should go to the Silver Strand. It's two miles by the road, but it's more beautiful over the cliffs.' The lane out of the town, with freshly painted park seats in pale blue and canary yellow, was full of Irish children chasing each other with sticks and shouting, but out along the cliffs there was no sound but the warm wind and the surf foaming round the wet rocks. Gulls perched, hunching their shoulders, on the white-splashed grey stone ledges at the clifftop, and then took off as we came closer, wheeling away into the wind and squealing; sheep that had been lying against the rock outcrops in the sun got up and trotted knobble-kneed up the hill, twitching their tails : if there had been another soul in sight it would have seemed like a cigarette com- mercial. All the time the sun got hotter and hotter, and we pushed waist-high through the bracken, and then up through a hot cleft in the rocks where the seed-grass came away in dry, dusty handfuls, and where we could see all along the coast to the Silver Strand. It looked miles and miles away, so we stopped on Wicklow Head by the old stone tower, and looked across at the lighthouse opposite, with an old lady sitting at the foot of it and knitting. I think sbe might even have been wearing a shawl. The Tourist Board are devils for detail.