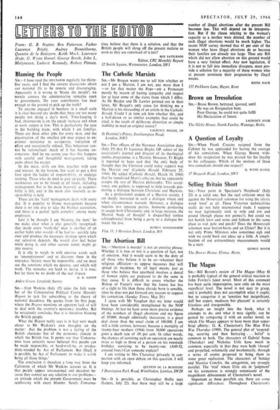 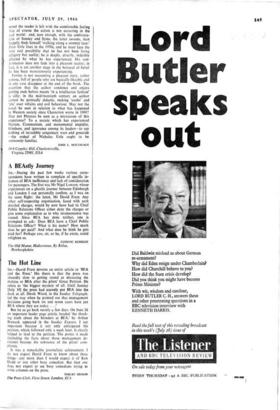 SIR,—Bill Byrom's review of The Magus (May 6) is probably typical of the general critical reaction to John Fowles's latest novel. Most of this comment has been quite imperceptive, save only on the most superficial level. The novel is not easy to grasp, and it probably does not accomplish what it ought; but to categorise it as 'sensitive but insignificant, dull but expert, mediocre but pleasant' is certainly frivolous and irresponsible.

Perhaps an insight into the book, what it attempts to do, and what it may signify, can be gained by comparing it with an earlier novel, to which The Magus appears to have more than super- ficial affinity: G. K. Chesterton's The Man Who Was Thursday (1908). The general plot of 'suspend- ing, securing and then betraying . . . belief' is common to both. The characters of Gabriel Syme (Thursday) and Nicholas Urfe have much in common, especially in that they were both 'chosen' and propelled, voluntarily and involuntarily, through a series of events proposed to bring them to some great realisation. The characters of Sunday and Maurice Conchis, the antagonists, are strongly parallel. The 'trial' where Urfe sits in 'judgment' on his tormentors is strongly reminiscent of the magnificent denouement of Chesterton's novel.

Important as these parallels are, there are some significant differences. Throughout Chesterton's

novel the reader is left with the comfortable feeling that of course the action is not occurring in the real world: and, sure enough, with the confronts-, tion of Sunday and Syme, the latter swoons, then happily finds himself `walking along a country lane' Poor Urfe lives in the 1950s, and he must face the very real possibility that he has not been living allegory but reality; he is deeply, directly, indelibly affected by what he has experienced. His con- frontation does not fade into a pleasant reality; in fact, it is yet another stage in the betrayal of belief he has been monotonously experiencing.

Fowles is not recounting a pleasant story, rather remote, full of people who are basically likeable and in any case disappear at the end of the book. The assertion that the author condones and enjoys putting ends before means 'in a totalitarian fashion' is silly; in the mid-twentieth century an author cannot be pointedly didactic, making '000hs' and `ahs' over villains and evil behaviour. May not the novel be seen in relation to what has happened in Western society since Chesterton wrote in 1908? May not Phraxos be seen as a microcosm of this experience? To a society which has experienced Nazism, Communism, and monumental stupidity, blindness, and ignorance among its leaders—to say nothing of incredibly sanguinary wars and genocide —the ordeal of Nicholas Urfe ought to be ominously familiar.