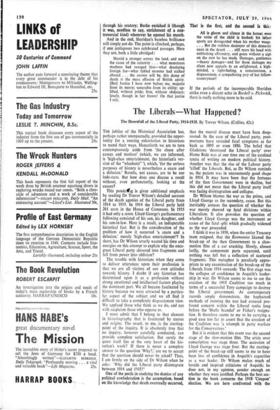 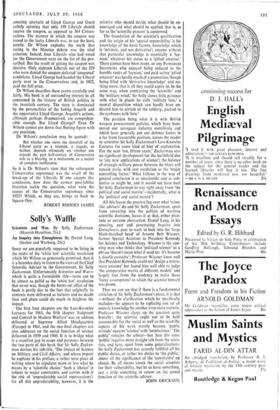 THE jubilee of the Historical Association has, perhaps rather unexpectedly, provided the oppor- tunity for a rousing exhortation to historians to mend their ways. Henceforth we are to turn contemptuously aside from 'the chase after causes and motives' (which, we are informed, is 'high-class entertainment, the historian's ver- sion of the "whodunit" '), which, 'for the serious purposes of history is nevertheless a snare and a delusion.' Results, not causes, are to be our lode-stars. But how does one discuss a result without, even perfunctorily, looking at the causes?

This pondeltig is given additional emphasis by reading Dr Trevor Wilson's detailed account of the death agonies of the Liberal party from 1914 to 1935. In 1914 the Liberal party held 261 seats in the House of Commons. In 1935 it had only a score. Lloyd George's parliamentary following consisted of his son, his daughter, and his son-in-law. Here is a result, an indisputable historical fact. But is the consideration of the problem of how it occurred 'a snare and a delusion,' merely 'high-class entertainment'? In short, has Dr Wilson utterly wasted his time and energies on this attempt to explain why the once- great Liberal party shivered into fragments and fell from power into oblivion?

The trouble with historians when they come to deliver utterances upon their profession is that we are all victims of our own attitudes towards history. I doubt if any historian has determined upon it as a profession without strong emotional and intellectual factors playing the dominant part. We all became fascinated by history because we were attracted by a particu- lar aspect of the subject and we all find it difficult to take a completely dispassionate view. We applaud those who think as we do, and eye with suspicion those who oppose us.

I must admit that I belong to that element in historiography that is fascinated by causes and origins. The result, to me, is the starting- point of the inquiry. It is absolutely true that no inquiry, however carefully conducted, can provide complete satisfaction. But surely the quest itself lies at the very heart of the his- torian's work? If there is never a complete answer to the question 'Why?,' are we to accept that the question should never be asked? Thus, I am firmly on the side of Dr Wilson when he asks : 'Why did the Liberal party disintegrate between 1914 and 1935?'

One of the perils in studying the demise of any political confederation is the assumption, based on the knowledge that death eventually occurred, that the mortal disease must have been deep- rooted. In the case of the Liberal party, post- mortems have revealed fatal symptoms as far back as 1895 or even 1886. The belief that Gladstone 'destroyed the Liberal party' over Home Rule was at one time one of the cardinal tenets of writing on modern political history. Another was that the rise of the Labour party 'killed' the Liberals. But, as Dr Wilson reminds us, the patient was in uncommonly good shape in 1914. It may have been that the fortunes of the then Government were in decline, but this did not mean that the Liberal party itself was facing disintegration and collapse.

I think it was in 1958, when the entire Treasury team resigned, that the Economist likened the break-up of the then Government to a slow- motion film of a car crashing. Slowly, almost lazily, the component parts separated, until nothing was left but a collection of scattered fragments. This metaphor is peculiarly appro- priate to any examination of the break-up of the Liberals from 1914 onwards. The first stage was the collapse of confidence in Asquith's leader- ship in war. Dr Wilson seems to me to see the creation of the 1915 Coalition too much in terms of a successful Tory campaign to destroy the Liberal government. As contemporary records amply demonstrate, the haphazard methods of running the war had aroused pro- found concern within the Liberal ranks long before the 'Shells Scandal' or Fisher's resigna- tion. It therefore seems to me to be carrying a good case too far to assert that the creation of the Coalition was 'a triumph in party warfare for the Conservatives.'

But it is evident that this event was the second stage of the slow-motion film. The crisis over conscription was stage three. The accession of Lloyd George ‘‘ as stage four. But the starting- point of the break-up still seems to me to have been loss of confidence in Asquith's capacities as a war leader. Dr Wilson makes much of hostile and inspired criticisms of Asquith; he does not, in my opinion, ponder enough on whether they were justified. Perhaps the best sec- tion in the book concerns the 1918 'Coupon' election. We are here confronted with the amazing spectacle of Lloyd George and Guest calmly agreeing that only 159 Liberals should receive the coupon, as opposed to 364 Conser- vatives. The manner in which the coupon was issued to the lucky Liberals was, to say the least, erratic. Dr Wilson explodes the myth that voting in the Maurice debate was the vital criterion. Indeed, four Liberals who had voted for the Government were on the list of the pro- scribed. But the result of getting the coupon was decisive. Only eighteen Liberals out of the 229 who were denied the coupon defeated 'couponed' candidates. Lloyd George had handed the Liberal party over to the Conservatives and, in 1922, paid the full price.

Dr Wilson describes these events carefully and fairly. His book is of outstanding interest to all concerned in the history of British politics in the twentieth century. The story is dominated by the personalities of the fading Asquith and the opportunist Lloyd George. Asquith's actions, although perhaps ill-conceived, are comprehen- sible enough. But Lloyd George? Even Dr Wilson cannot pin down that fleeting figure with any precision.

Dr Wilson's conclusion may be quoted: But whether one views the downfall of the Liberal party as a triumph, a tragedy, or neither, depends ultimately on whether one regards the past half-century of Conservative rule as a blessing, or a misfortune, or a matter of complete indifference.

So it is Dr Wilson's view that the subsequent Conservative supremacy was the result of the break-up of the Liberals. If one accepts this conclusion, how does the earnest post-jubilee historian tackle the question, what were the causes of the Conservative supremacy since 1922? Which, as they say, brings us back to Square One.