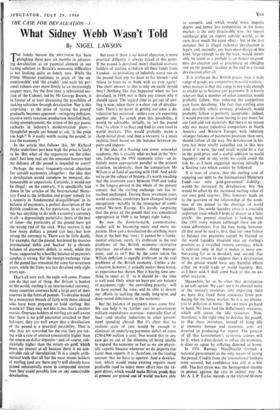 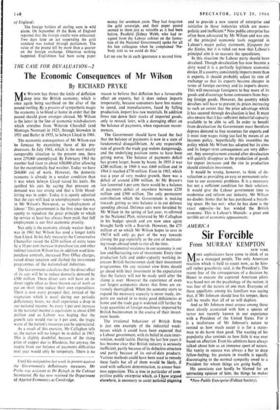 THE lonely furrow the SPECTATOR has been ploughing these past six months in advocat- ing devaluation as an essential element in any lasting solution to Britain's economic difficulties is not looking quite so lonely now. While the Prime Minister continues to prate of 'the un- mentionable' and 'the citadel,' and nails his per- sonal colours ever more firmly to an increasingly suspect mast, for the first time a substantial sec- tion of the Cabinet, led by Mr George Brown, is in favour of at least discussing the possibility of seeking salvation through devaluation. Nor is this surprising : as the price of 'saving the pound' gradually becomes apparent—swingeing deflation, massive extra taxation, production throttled back, rising unemployment, the return of the pay pause, cutbacks in industry's modernisation plans— thoughtful people are bound to ask, 'is the price too high?' Is it really worth saving the pound, to lose the economy?

In the article that follows this, Mr Richard Pryke underlines just how high the price is likely to be. But what of the arguments on the other side? Just how real are the unnamed horrors that the defence of the pound is intended to avert?

Perhaps the most frequently-stated objection lies outside economics altogether: the idea that a devaluation would somehow be immoral, dis- honourable or unpatriotic. Certainly, it would not be illegal: on the contrary, it is specifically laid down in the articles of the International Mone- tary Fund as the orthodox and proper remedy for a country in 'fundamental disequilibrium' in its balance of payments, a perfect description of the British condition. As for patriotism, in so far as this has anything to do with a country's currency at all—a depressingly materialist thesis at the best of times—the protectors of the pound have got the wrong end of the stick. What matters is not how many dollars a pound can buy, but how strong the currency is. There can be little doubt, for example, that the pound, burdened by massive international debts and 'backed' by a chronic balance of payments deficit, is weak, while the franc, supported by a healthy balance of payments surplus, is strong. Yet the foreign exchange value of the pound has remained the same for seventeen years, while the franc was last devalued only eight years ago.

That's all very well, the reply will come. France can do that sort of thing. But Britain is banker to the world, sterling is an international currency, many countries overseas hold a large part of their reserves in the form of pounds. To devalue would be a monstrous breach of faith with those abroad who have been prepared to hold sterling. But would it? They may not like it, but that's another matter. Overseas holders of sterling are well aware that there is no gold guarantee attached to their balances; they are well aware that a devaluation of the pound is a practical possibility. That is why they are rewarded for the risk they are tak- ing with a rate of interest consistently higher than the return on dollar deposits—and, of course, sub- stantially higher than the return on gold, which

bears no interest at all because there is no eon- ceivable risk of 'devaluation.' It is a simple arith- metical truth that all but the most recent holders of sterling (and are there any?) will already have gained substantially more in compound interest than they could possibly lose on any conceivable devaluation.

But even if there is no moral objection, a more practical difficulty is always raised at this point. If the pound is devalued, won't shocked overseas holders of sterling withdraw all their funds from London—so provoking an infinitely worse run on the pound than any we have so far known—and refuse to trust us or bank with us ever again? The short answer to that is why on earth should they? Nothing like this happened when we last devalued, in 1949, nor is there any reason why it should again. The logical time to get out of ster- ling is now, when there is a clear risk of devalua- tion. There's no point in getting out once a de- valuation has occurred—unless you are expecting another one. To scotch even this possibility, it would be advisable, initially, to 'set the pound free,' to allow it to float and find its own level in world markets. This would probably mean a sharp initial drop, and then a recovery to a more realistic level based on the balance between ex- ports and imports.

If the idea of a floating rate seems somewhat academic, this is exactly what we had in the 'thir- ties, following the 1931 economic crisis—an in- finitely more appropriate parallel to the present situation, incidentally, than the comparison Mr Wilson is so fond of quoting with 1940. And while we're on the subject of history, it's worth recalling that the seventeen years between 1949 and today is the longest period in the whole of the present century that the sterling exchange rate has re- mained unchanged. During those seventeen years world economic conditions have changed beyond recognition—notably in the resurgence of conti- nental Western Europe. It's hardly surprising that the price of the pound that was considered appropriate in 1949 is no longer right today.

By now the down-to-earth, commonsense, reader will be becoming more and more im- patient. How can a devaluation do anything more than at the best buy time : it cannot be a funda- mental solution; surely it's irrelevant to the real problems of the British economy—restrictive practices, out-of-date unions, sleepy manage- ment, and so on? But by the same token the Wilson deflation is equally irrelevant to the real problems of the British economy. Unlike a de- valuation, however, it actually makes them worse, as experience has shown. Nor is buying time any- thing to sneer at, if—as it should be—the time is well used. Only when we have put our balance of payments right—the overriding priority—will we have earned the time, and be able to devote our efforts to tackling the really long-term and deep-seated deficiencies in the economy.

But the balance of payments must come first. We can help it by further cuts in government military expenditure overseas—especially East of Suez—and smaller reductions in other govern- ment spending abroad. But it's clear that no realistic scale of cuts would be enough to eliminate an underlying payments deficit of some f250-£300 million a year. Nor would this in any case get us out of the dilemma of being unable to expand the economy as fast as we are physic- ally capable because whenever we do imports rise faster than exports. It is, therefore, on the trading account that we have to operate. And a devalua- tion, which would make existing exports more profitable (and so inject more effort into the ex- port drive), which would make British goods that at present are priced out Of world markets able to compete, and which would make imports dearer and hence less competitive in the home market, is the only practicable way. An import surcharge plus an export subsidy would, to be sure, have much the same effect: but in the first instance this is illegal (whereas devaluation is legal), and, secondly, any back-door device of this kind, large enough to do the trick, would inevit- ably be taken as a prelude to an honest-to-good- ness devaluation and so precipitate an almighty run on the pound—leading in the end to a forced devaluation after all.

It is irrelevant that British prices, over a wide range of goods, are competitive in world markets : what matters is that this range is not wide enough to enable us to balance our payments. It is barely relevant that a number of other countries would probably follow, thus reducing the competitive gain from devaluing. The fact that sterling area (and possibly other) primary producers would probably follow is perfectly acceptable : indeed, it would prevent us from having to pay more for our food and raw materials. But there is no reason why our major industrial competitors in North America and Western Europe, with infinitely stronger balance of payments positions than ours, should follow all the way. No devaluation in his- tory has been totally cancelled out in this way (even if it were, the end result would be a rise in the gold price and a useful addition to world liquidity) and in any event we could avoid the risk by, as I have suggested, moving initially to a floating rate which cannot be followed. It is true, of course, that the sterling cost of repaying our debt to the International Monetary Fund—our only gold-guaranteed liability— would be increased by devaluation; but this would be offset by the increased sterling value of our own gold reserves. This, however, leads on to the question of the relationship of the weak- ness of the pound to the shortage of world liquidity. The world liquidity crisis is a crucially important issue which I hope to discuss in a later article: the present situation is looking more like 1931 every minute (although there are ob- vious differences). For the time being, however, all that need be said is, first, that our own failure to balance our payments cannot be blamed on the world liquidity situation (nor on sterling's position as a so-called reserve currency, which is relevant only in that it makes it more em- barrassing for us to devalue), and, second, that there is no reason to suppose that a devaluation of the pound would have any harmful effects either on world trade or world liquidity. But, as I have said, I shall come back to this on an- other occasion.

Meanwhile, let us be clear that devaluation is no soft option. We can't use it to channel more of the nation's resources into exporting until we have first freed those resources from pro- ducing for the home market. So it is no alterna- tive to deflation at home: the two must go hand in hand. We have had the deflationary measures, which will create the idle resources. Now, therefore, is the right time to devalue the pound, so that those resources, instead of lying idle at immense human and economic cost, are diverted to producing for export. The greatest of all this Government's economic crimes will be if, when it does decide to reflate the economy, it does so again by reflating demand at home.

In 1931 Ramsay MacDonald formed a national government as the only means of saving the pound. Credits from the international bankers were secured, but confidence was still at a low ebb. The last straw was the Invergordon mutiny in protest against the cuts in sailors' pay. As Mr A. J. P. Taylor records in the Oxford History of England: The foreign holders of sterling were in wild alarm. On September 19 the Bank of England reported that the foreign credits were exhausted. Two days later an act suspending the gold standard was rushed through parliament. The value of the pound fell by more than a quarter on the foreign exchange. Otherwise nothing happened. Englishmen had been using paper

money for seventeen years. They had forgotten the gold sovereign; and their paper pound seemed to them just as valuable as it had been before. Passfield [Sidney Webb, who had re- signed from the Labour cabinet on the forma- tion of the National Government] spoke for all his late colleagues when he complained 'No- body told us we could do. this.'

Let no one be in such ignorance a second time.