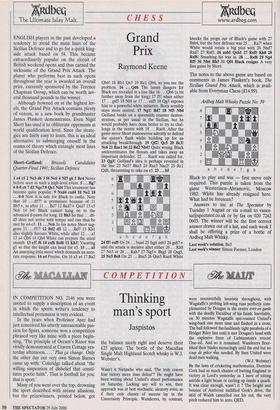 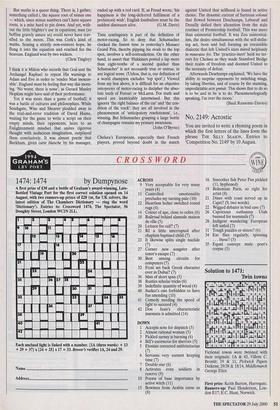 IN COMPETITION NO. 2146 you were invited to supply a description of an event in which the sports writer's tendency to intellectual pretension is very evident.

In the years when Professor Ayer had just conceived his utterly unreasonable pas- sion for Spurs, someone won a competition phrased very like mine with a piece begin- ning, 'The principle of Occam's Razor was vividly demonstrated at Craven Cottage yes- terday afternoon....' Plus ca change. Only the other day our very own Simon Barnes came up with: 'Coleridge talked about "the willing suspension of disbelief that consti- tutes poetic faith". That is football for you: that is sport.'

Many of you went over the top, drowning the sport described with arcane allusions, but the prizewinners, printed below, got the balance nicely right and deserve their £25 apiece. The bottle of the Macallan Single Malt Highland Scotch whisky is W.J. Webster's.

Wasn't it Nietzsche who said, 'The truly craven fear victory more than defeat'? He might have been writing about United's abject performance on Saturday. Lacking any will to win, their approach was at best stochastic, aleatory even, as if their only chance of success lay in the Uncertainty Principle. Wanderers, by contrast,

were resourcefully heuristic throughout, with Wagstaffe's probing left-wing runs perfectly com- plemented by Dougan in the centre ever en garde with the deadly Excalibur of his finish Inevitably, on 30 minutes Wagstaffe spit-roasted United's wing-back one more time and flashed in a cross. The ball followed the faultlessly tight parabola of a Bridget Riley line until it met Dougan's head with the explosive force of Lichtenstein's wiiAm! One—nil. And so it remained. Wanderers flour- ished their blades menacingly until the end but no coup de grace v)as needed. By then United were dead men walking.

(W.J. Webster) By the laws of cricketing mathematics, Dominic Cork had as much chance of batting England to victory at Lord's yesterday as I have of sitting astride a light beam or curling up inside a quark. It was clear enough, wasn't it ? The height and bounce of Ambrose nullified Cork's drive, the skid of Walsh cancelled out his cut, the very pitch reduced him to zero. QED.

But maths is a queer thing. There is, I gather, something called i, the square root of minus one — which, since minus numbers can't have square roots, is a mite hard to pin down. And yet, with- out the little blighter's use in equations, man (so boffins gravely assure us) could never have trav- elled to the moon. This was Cork's kind of maths. Seizing a strictly non-existent hope, he flung it into the equation and reached for the heavens. England won by two wickets.

(Chris Tingley) I think it is Milton who records that God sent the Archangel Raphael to repeat His warnings to Adam and Eve in order to 'render Man inexcus- able'. England must be feeling that way this morn- ing. 'No worst, there is none', as Gerard Manley Hopkins might have said of their performance.

Yet it was more than a game of football; it was a battle of cultures and philosophies. While Southgate, Wise and Shearer plodded away in the trial-and-error tradition of David Hume, waiting for the game to write a script on their empty minds, their opponents, heirs to an Enlightenment mindset that unites rigorous thought with audacious imagination, outplayed them conclusively. It was almost poetic that Beckham, given carte blanche by his manager, ended up with a red card. If, as Freud wrote, 'his happiness is the long-deferred fulfilment of a prehistoric wish', English footballers must be the saddest dinosaurs alive. (G.M. Davis) Time contingency is part of the definition of motor-racing. So to deny that Schumacher clocked the fastest time in yesterday's Monaco Grand Prix, thereby pipping his rivals to the top spot, involves a self-contradiction. On the other hand, to assert that 'Hakkinen posted a lap more than eight-tenths of a second quicker than Schumacher' is not necessarily true or untrue, in any logical sense. (Unless, that is, our definition of a world champion excludes 'top spot'.) Viewed from my box above, it is difficult for an objective interpreter of motor-racing to decipher the abso- lute truth of Ferrari or McLaren. For truth and speed are inextricably intertwined. But this ignores 'the right balance of the car' and 'the con- dition of the track': they are all involved in the phenomenon of 'anticipatory resoluteness', i.e., winning. But Schumacher grasping a large bottle of champagne remains my primary awareness.

(John O'Byrne) Chelsea's Europeans, especially their French players, proved beyond doubt in the match against United that selfhood is found in active choice. The dynamic current of Sartrean volonte that flowed between Deschamps, Leboeuf and Desailly defied their alienation from the stale routines of Premiership football. This was more than existential football. It was Zen existential- ism, the desire simultaneous with the self-defin- ing act, boot and ball forming an irresistible dialectic that left United's stars mired helplessly in mauvaise foi. The 'practico-inert' held no ter- rors for Chelsea as they made Stamford Bridge their realm of freedom and doomed United to the necessity of defeat.

Afterwards Deschamps explained, 'We have the ability to surprise opponents by switching wings, by taking liberties, and of course by the stunning, unpredictable acte gratuit. This shows that to do so is to be and to be is to do. Phenomenologically speaking, I'm over the moon.'